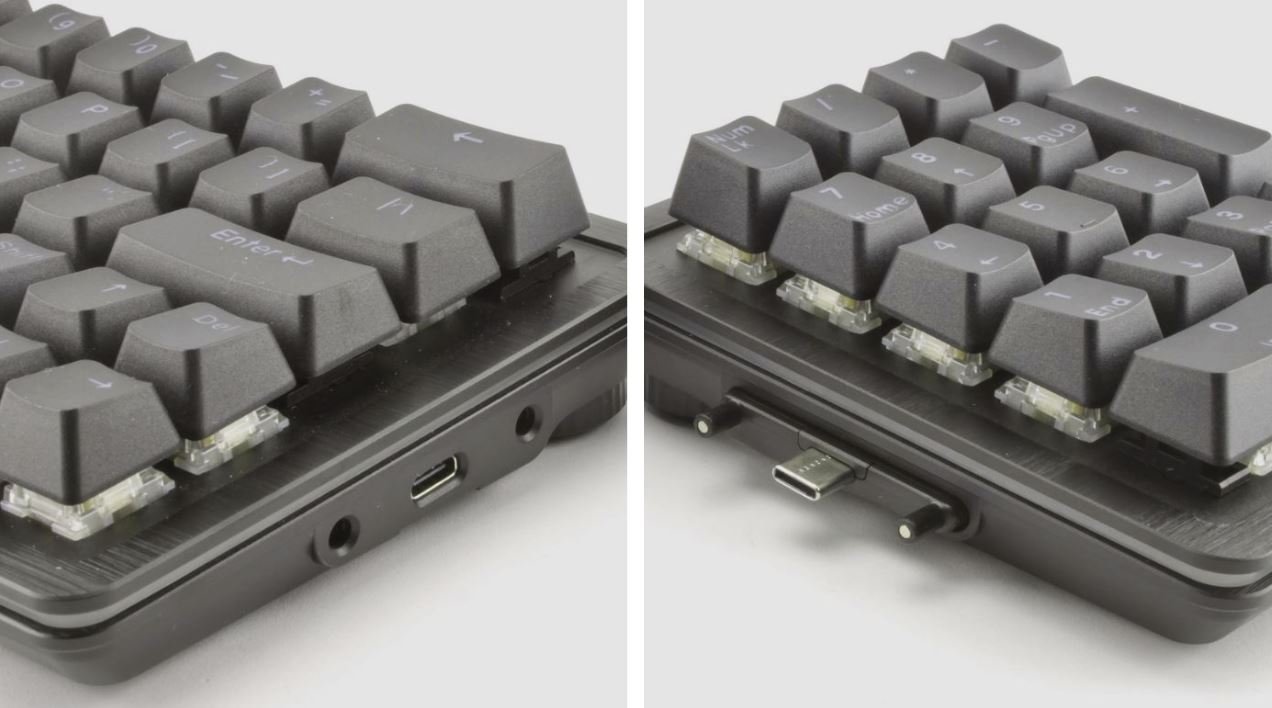 Compact keyboards have received much attention lately as they effectively help with desk space issues. Since they are also effortless to transport, they welcome guests at Lan parties or e-sports.

A new model from this segment comes from the young manufacturer Mountain. Mountain was founded in 2018 and became known through a successful Kickstarter campaign for the Mountain Everest Max keyboard. Mountain names its products after well-known mountains and selects only the highest representatives according to the goals it has set itself.

The Mountain Everest 60 is a gaming keyboard with arrow keys for enthusiasts and without compromise. In the field of particularly compact 60% keyboards without a numpad, there is already a whole range of interesting models on the market. However, the new Everest 60 wants to set new accents with unique features, some of which could already be seen in the larger Everest Max. One of the outstanding features of the keyboard is certainly the optional, dockable numpad, which can be docked to the keyboard on the right or left.

The modular system allows you to add a customizable and compact numeric keypad to either side.

The Mountain Everest 60 inherits the care that the company put into its first keyboard, the Everest Max, from the moment we open the packaging and see its characteristic box. On this occasion we do not have “little drawers” with the different elements, since it is a simpler keyboard and where its only module, the NumPad, comes in a separate box. 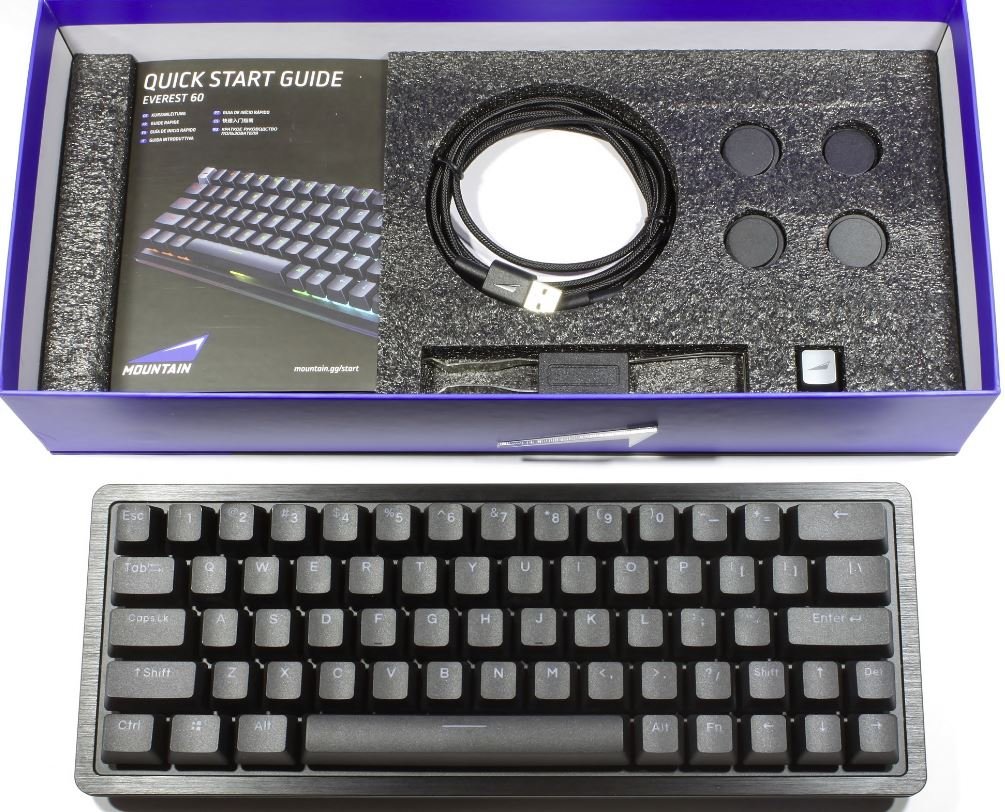 Included is an extra Mountain logo ESCAPE key, a tool to remove the keys and switches themselves, and a USB-C to USB-A cable. 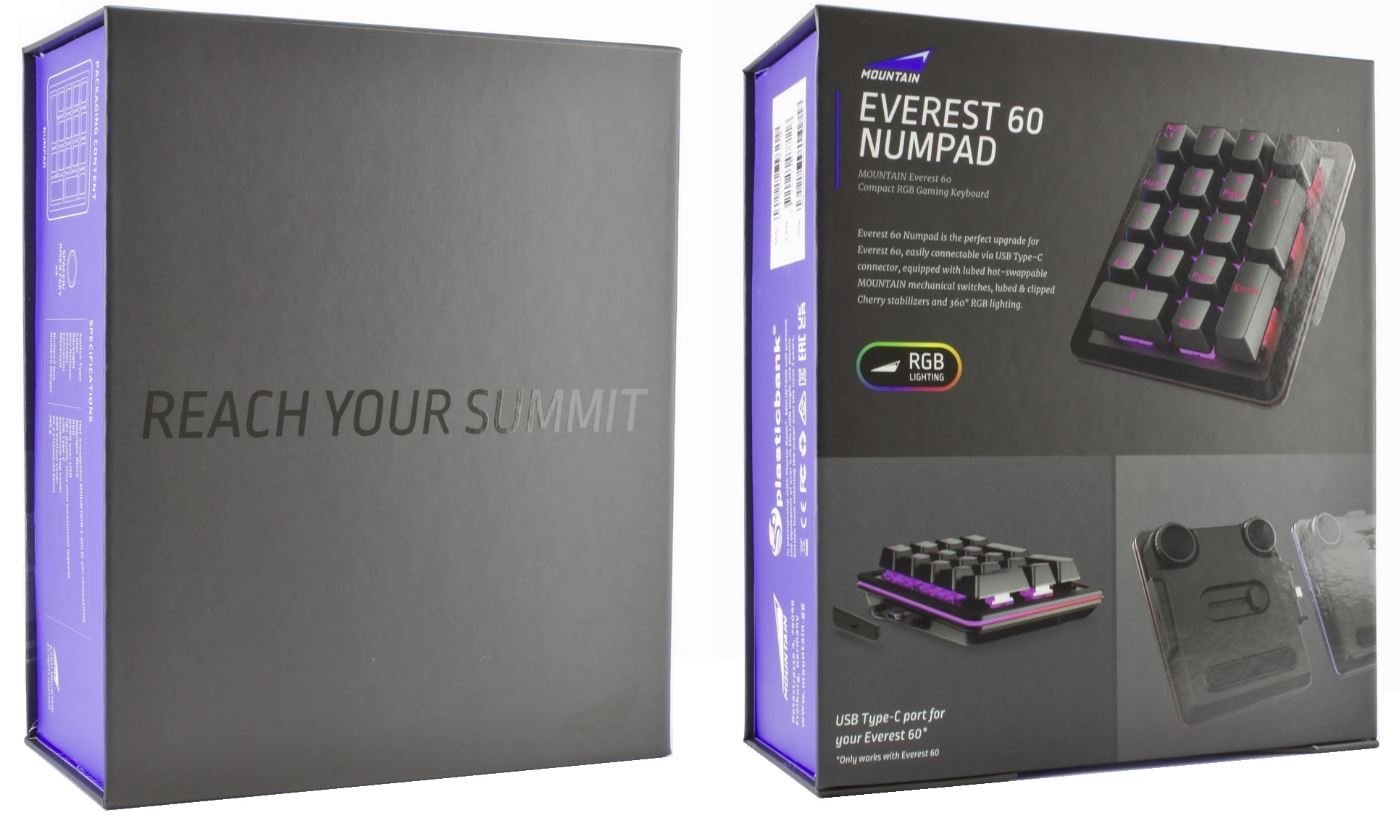 The keyboard also maintains many elements reminiscent of the original Everest. We have a main structure in brushed aluminum with a small indentation on which the switches are placed. Mountain has refined the finish a bit here. If in the Max we directly saw the grooves left by the CNC tool with which it was manufactured, here the finish is smoother.

This model has a dark finish that contrasts with the integrated lighting system along the entire edge . These RGB LEDs can be zonally controlled from Mountain BaseCamp software , as well as synced with the independent key-by-key lighting that’s built into the keyboard PCB. 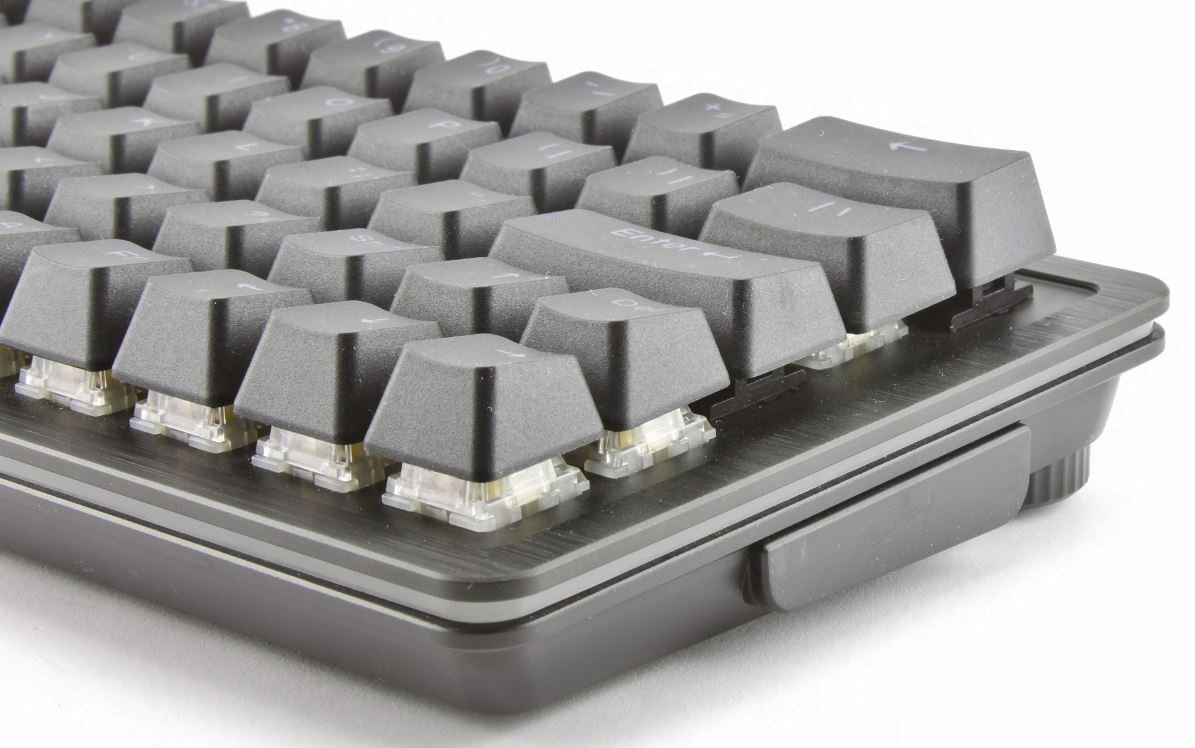 The keycaps are made of PBT or polybutylene terephthalate , a plastic material used in high-quality keycaps that has a matte finish that is more resistant to wear. Its touch is somewhat rougher, although the sensation is very pleasant.

The Everest 60 has a connection for the dockable numpad on the left and right side. The two ports are covered with a magnetically held cap that can be easily removed.

The numpad itself comes in the same design as the keyboard and fits seamlessly. On the bottom you can quickly see the technology works. You can use a slider on the numpad to extend the connection to the left or right. Again, the ports are covered with magnetic caps and automatically fall off when the slider is operated. Once extended, the numpad can then simply be docked to the side of the keyboard. 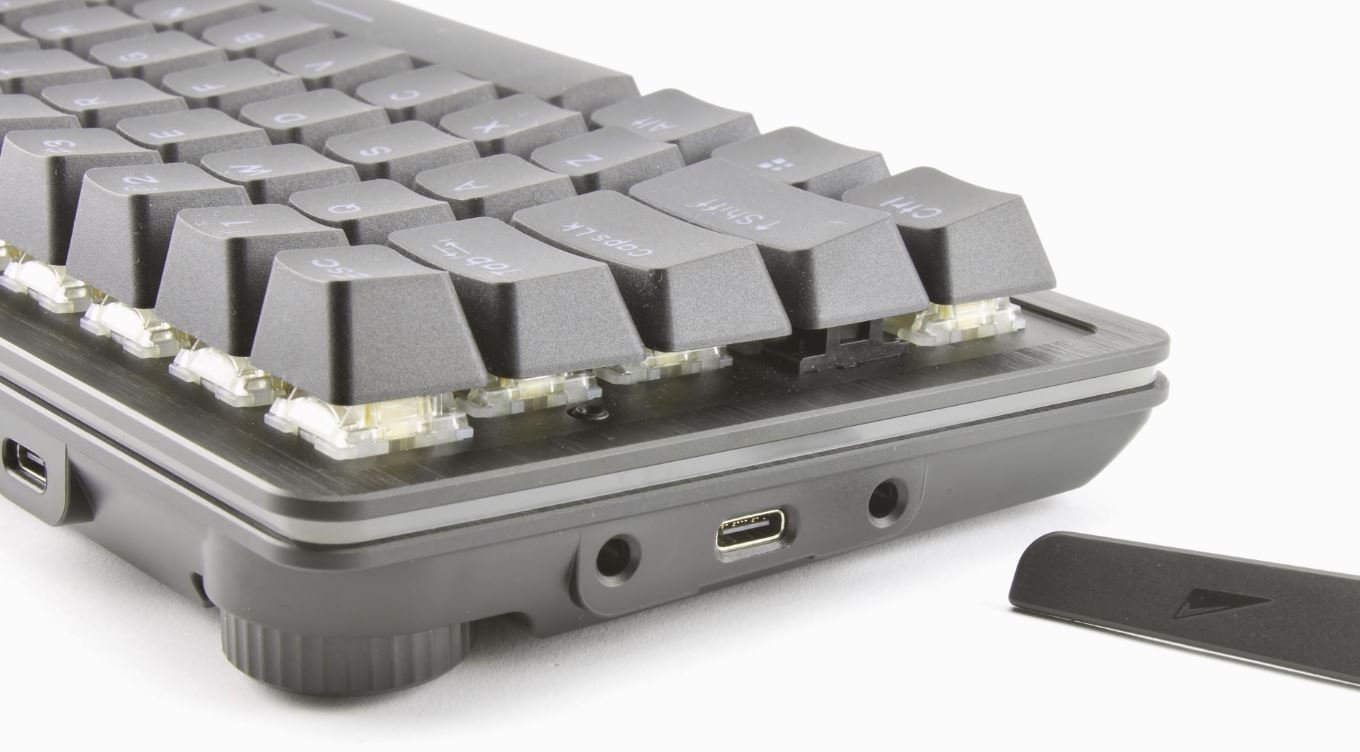 The two parts are then electronically connected via a USB-C-like plug. In addition, two stabilizers extend, which ensure that the entire weight does not lie on the connector when you lift the keyboard. However the connection between the numpad and the keyboard is not very stable. So there is no locking or the like. Of course, this has the advantage that you can quickly remove the numpad at any time, which was probably the focus here.

On the other hand, the numpad sags a bit when you lift the keyboard and can also fall off when you hold the keyboard at an angle. Overall, however, the solution is satisfactory, since one can assume that the keyboard is only used occasionally and is not constantly attached to the keyboard, because then one could also use it right away.

For this Everest 60, Mountain has released its mechanical switches. Specifically, the analyzed model comes with Mountain Linear 45 switches with a striking yellow color. It will also be sold with the faster Linear 45 Speed ​​and Tactile 55 with tactile feedback. 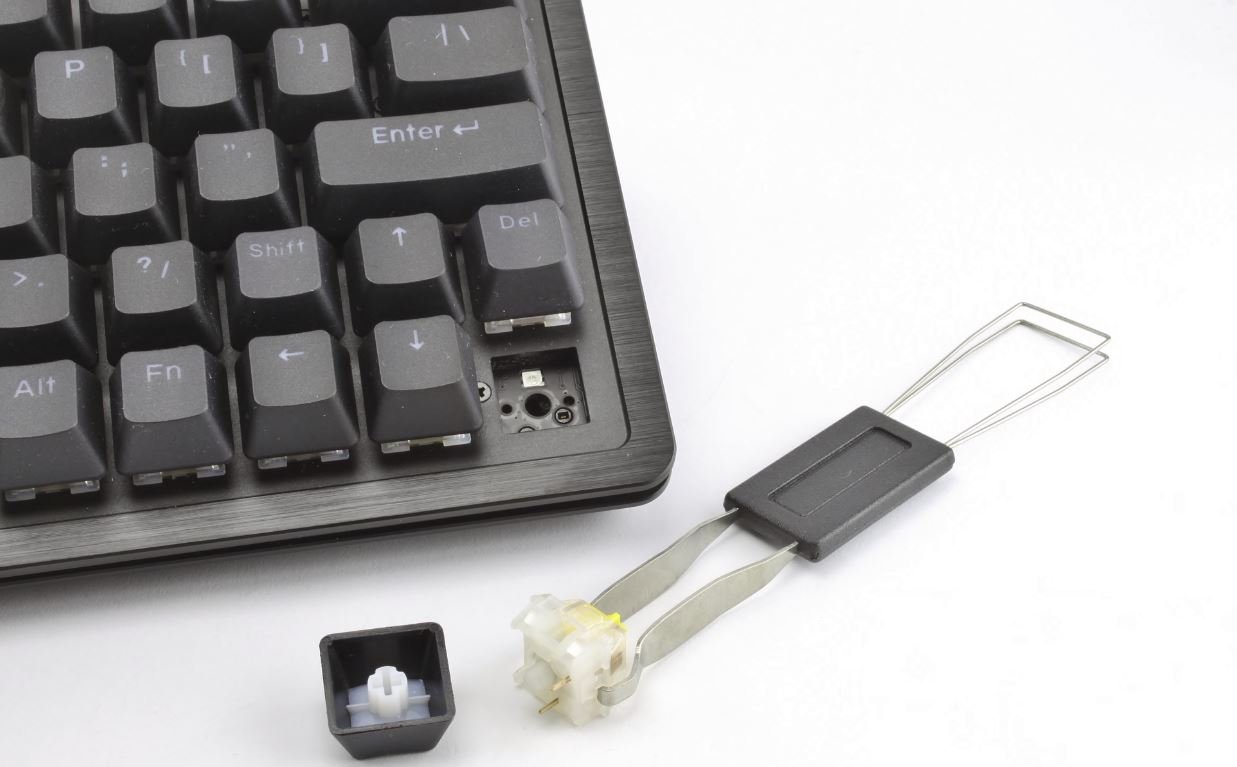 The Mountain Linear 45 switches with a linear travel similar to that of the Cherry MX Red and an identical actuation force of 45g. Its actuation distance and travel are the same, with 2mm of distance travelled to send the pulsation and 4mm until the bottom is pressed. 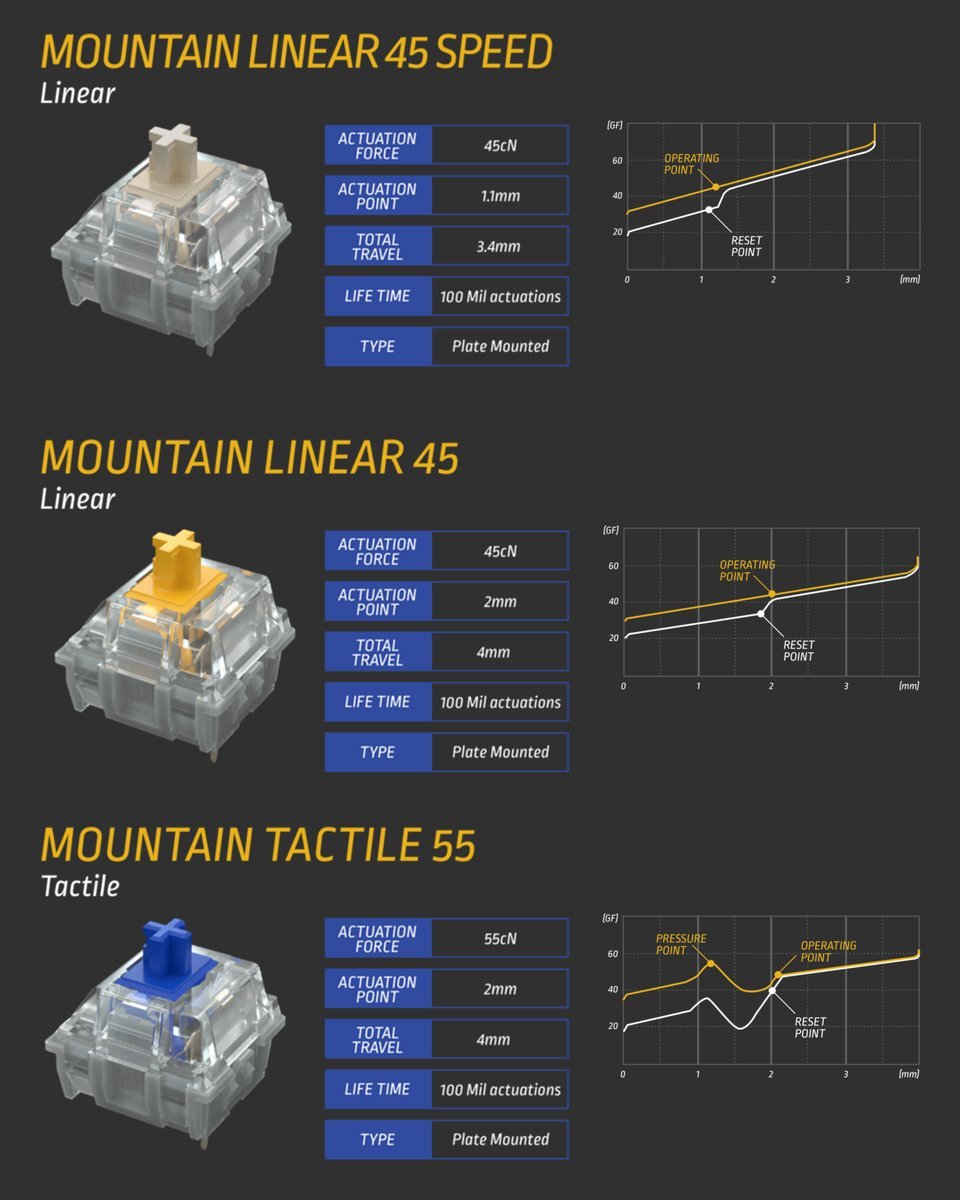 The similarities end there, as the Mountain Linear 45 withstands 100 million keystrokes and incorporates stainless steel springs and shock absorbers to reduce the sound level. They combine Nylon PA66 at the base, Polycarbonate at the top to show transparency, and Polyoxymethylene or POM at the stem. 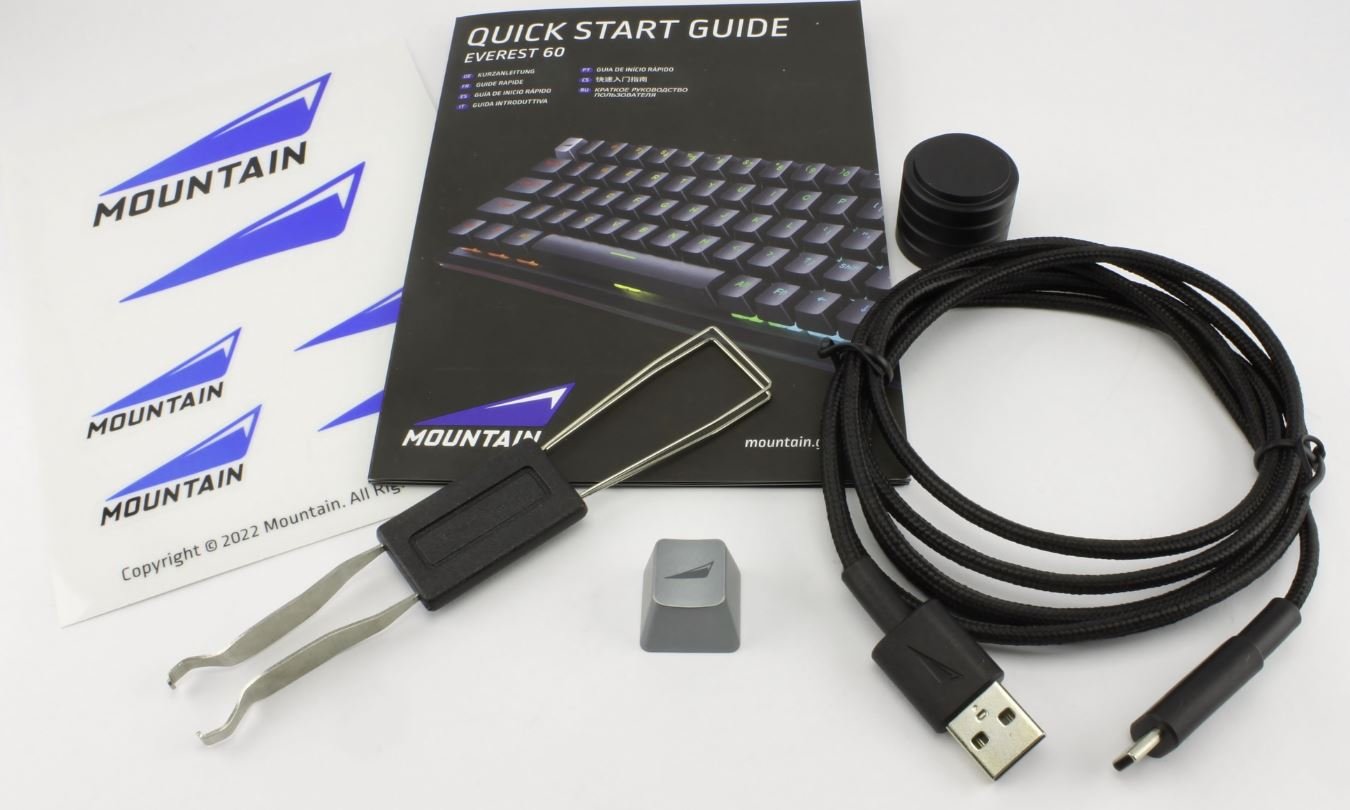 Also, Mountain has put a lot of love into these switches, at least the ones built into the Everest 60. We refer to the fact that each switch has been pre-lubricated at the factory and combined with Cherry stabilizers on those larger keys. Also manually pre-lubricated with “Krytox GPL 205 Grade” lubricant.

The PCB supports 3-pin switches like the ones included and those of 5 pins. All these switches are placed on it and, in turn, it is placed on top of different cushioning layers of silicone and foam.

It is possible to hot-swap switches, we have tried swapping them with the Cherry MX Red on the Everest Max, and they have worked without problems without having to turn off the keyboard.

From the lubrication to the cushioning layers, all this may seem more marketing than anything else, but nothing is further from the truth.

As already mentioned at the beginning, the base camp at Mountain is the central point of contact for configuring the hardware. The Basecamp software is excellent and small, and unobtrusive. The download is just 157 MB. The design is undoubtedly a reason for this because Mountain largely dispenses with visual chic and makes the software simple and functional.

All connected devices are displayed large on the start page. If necessary, you will also be made aware of available updates. The software is hidden and does not start with the system. You have to activate this option manually first. Alternatively, the base camp always starts manually when required.

The actual configuration of the software is divided into five sections, profiles, RGB, key assignments, macros, and settings. All areas are almost self-explanatory and very structured to find your way around immediately.

Compared to other manufacturers, the range of functions is limited to the essentials. Indeed, many users appreciate something because some software for mice and keyboards is just overloaded.

The selection is instead limited to the well-known primary effects as far as the RGB effects are concerned. Extensive options such as overlaying several color layers or creating your results do not exist, but most users do not need them. Overall, the software makes a good impression.

As soon as you unpack the Everest 60, you quickly realize that you are getting a piece of high-quality hardware. The keyboard’s feel is excellent, and it leaves a very stable impression overall. Even the first attempts at typing clearly show the differences from conventional mechanical keyboards. Both the typing feel itself and the background noise are convincing, and the effort that Mountain put into the damping of the keyboard pays off. We were particularly fascinated by the enter and backspace keys with the lateral stabilizers. These are hardly recognizable as mechanical keys from the noise. Of course, the fact that all keys on the Everest 60 are lubricated also contributes to the particularly “smooth” typing experience.

The Numpad also makes a good impression; only the connection between it and the keyboard could be a bit more stable. On the other hand, the construction means that it can be put on and taken off in seconds because there is no locking mechanism.

As with all 60% keyboards, use requires some adjustment as the key spacing differs from regular keyboards. The same applies to the various key combinations for lighting or multimedia functions, which you first must memorize. With the arrow keys and the usual position of the enter and backspace key, you somehow feel more at home on the Everest 60 when you switch over than on other models that have also eliminated these keys.

The ergonomics of the keyboard is good even without a palm rest, especially since it can be set up in four stages with attractive magnetic feet. It is often precisely these relatively small ideas that distinguish innovative products from standard products. A palm rest would undoubtedly have been nice, but it would contradict the concept of using as little space as possible.

The Everest 60 doesn’t use Cherry buttons, but the models used by Mountain don’t seem to fall behind the original. Of course, we can’t say anything about the durability after a short test period, but the switches are also designed for 100 million operations according to the manufacturer.

The lighting of the keyboard is optically on a very high level. Only slight differences in brightness can be seen on the laterally illuminated base. Overall, the brightness is high, and the color reproduction is also convincing. The software lags behind the RGB-focused competition when it comes to lighting effects. You can feel that the focus at Mountain is much more on the hardware itself.

The Everest 60 convinces with high-quality hardware, innovative features and an excellent typing feel, which can stand out from other mechanical keyboards thanks to damping and lubrication. The dockable numpad and the retention of the arrow keys on the 60% keyboard also set the model apart from the others. The Everest 60 is definitely a recommended keyboard.