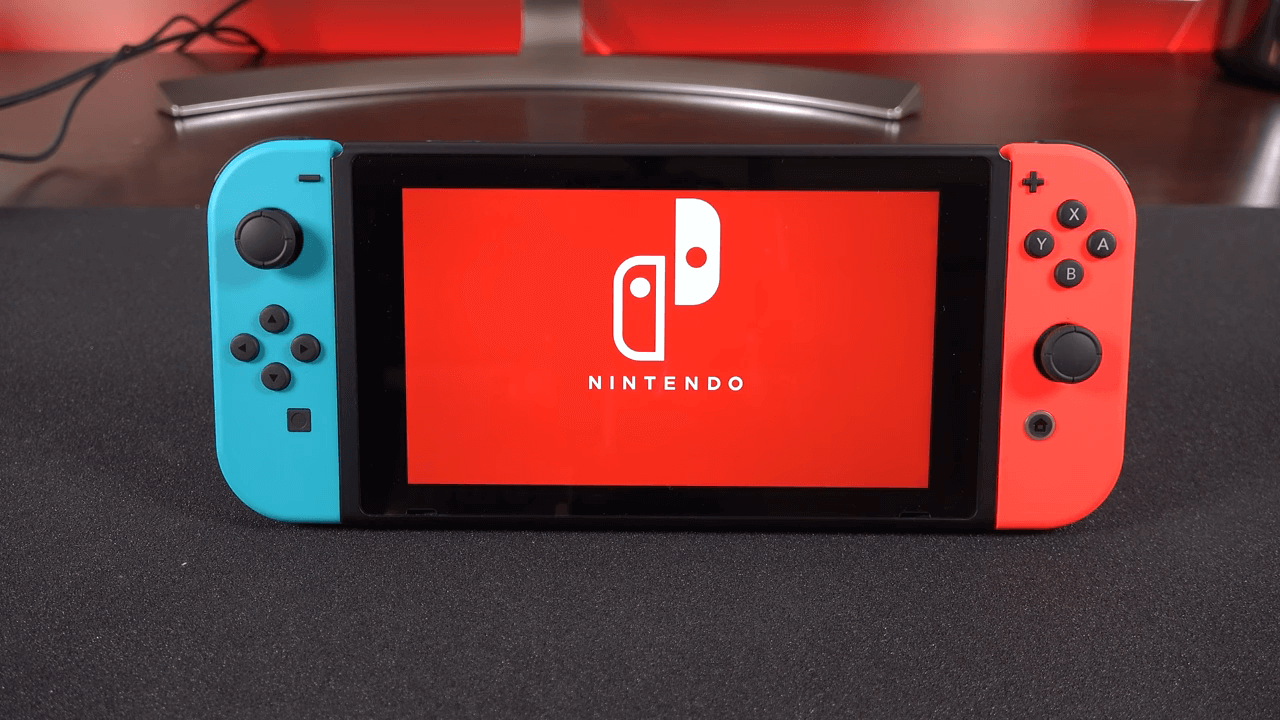 If you like innovation and the concept of a hybrid, playable console appeals to you, go for the Nintendo Switch. The console is also particularly recommended if you often like to play with family and children. You will not be disappointed with the catalogue of games offered with titles exclusive to the Switch which have obtained exceptional ratings on their releases.

If you’re more looking for sumptuous 4k graphics and detail and plan to play online multiplayer on a regular basis, head to the Playstation 5 or Xbox Series X / Series S which deliver much better graphics performance. You will however be intended to play only in your living room! 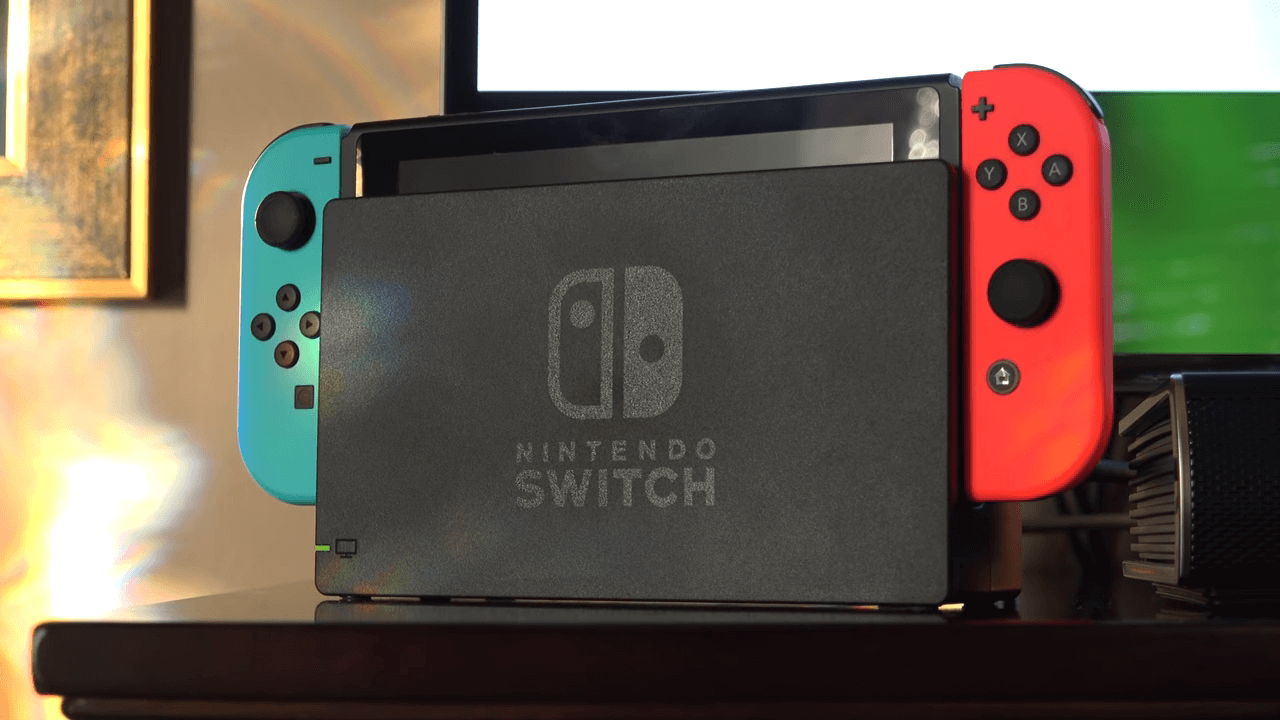 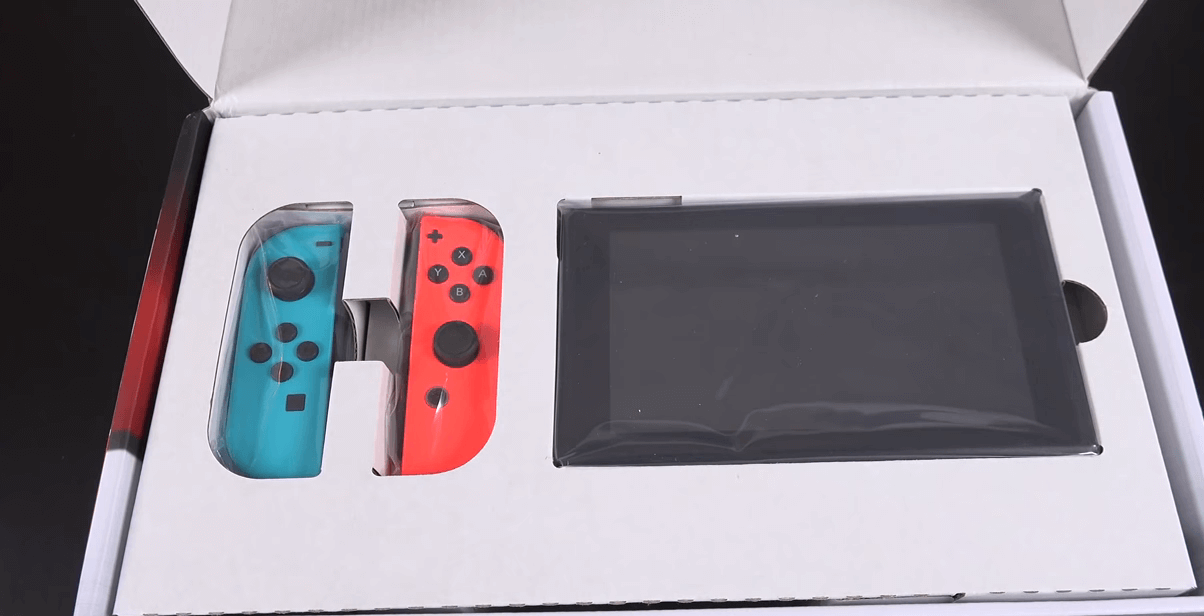 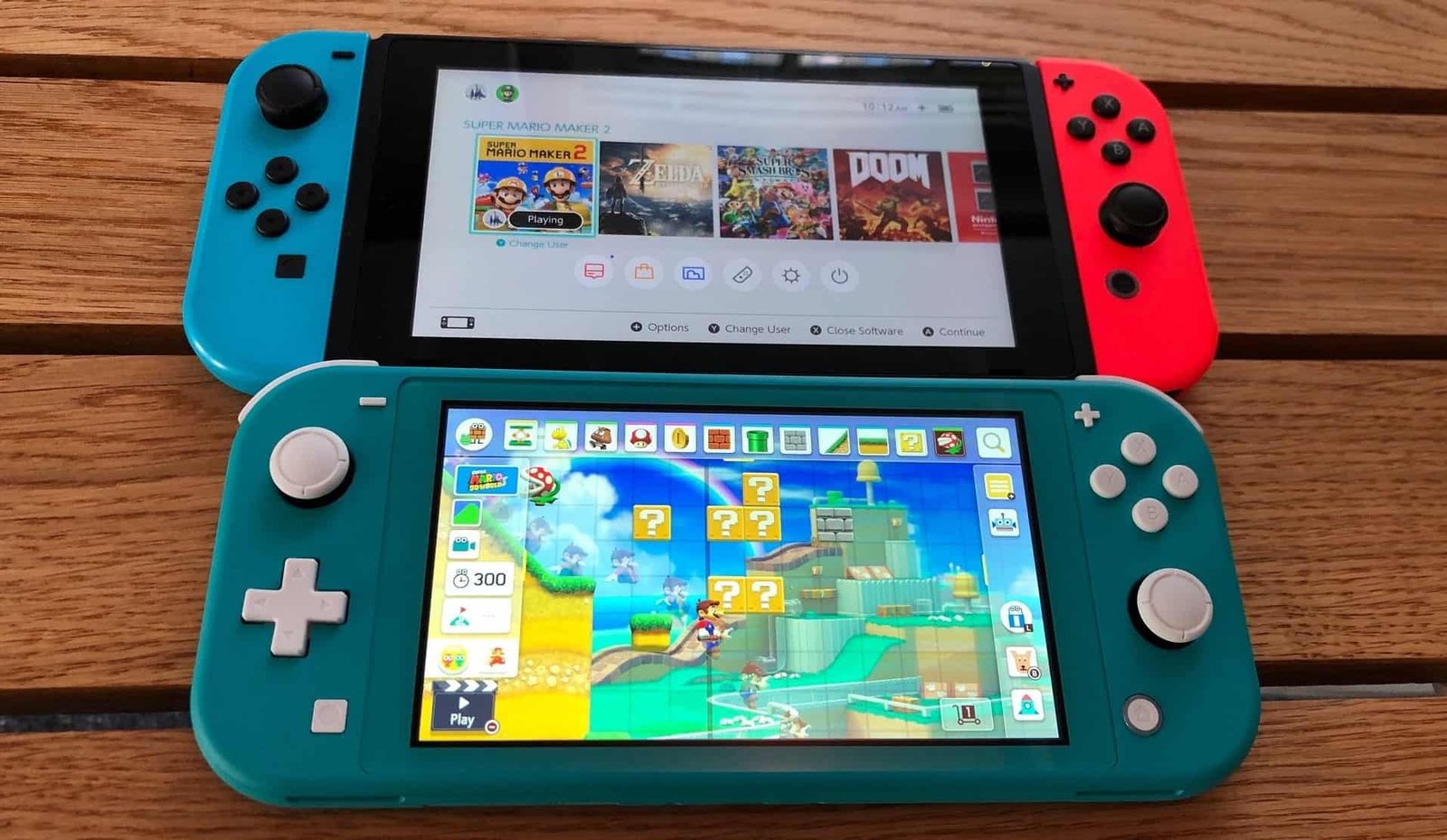 The first thing to know is that the  Switch Lite is exclusively a portable console. You will not be able to connect it to your TV. Therefore, the Joy-Con are fixed and cannot be detached from the console screen. Strictly speaking, there isn’t even a Joy-Con anymore. The console then appears to be more manageable because it is smaller, but the size of its screen is also considerably reduced.

The Nintendo Switch Lite has a 5.5-inch screen compared to 6.2 inches for the first Switch.

However, the definition remains the same. Its small size also influences its weight, more than 100g less than that of the Switch. The Switch Lite is therefore intended to be a portable and transportable console.

On the Switch, it is possible to find all kinds of games. From adventure games, to sports games to action and puzzle games.

Therefore,  all the members of your family will find their account there . Whether it’s your teenage son who is a seasoned gamer, your youngest daughter who is just starting to play video games, you who are particularly fond of reboots of old games and great classics to enjoy at parties with friends or family. .

Nintendo has, as always, bet on this last point with simple games that have a multiplayer mode ideal for playing with the family.

As parents, it is always difficult to give free access to the console to your children. The lack of an internet browser then becomes a strong point that will give you a little peace of mind. Your child will not be able to surf as they please. However, other reluctance may persist, for example because of the presence of games of a violent nature installed on the console by another member of the family or even in relation to the playing time your child may have.

Nintendo offers an application to install on your mobile through which you can keep an eye on your children’s activities.

If you don’t have a mobile device, the  console also has settings to adjust directly on it .

The duration of the game to which your child will be able to claim is configurable.

He will then receive a notification on the console informing him that his playing time is up and thanks to the application, you will be able to control if your child respects the schedules that you have set.

You will also have access to a history of the games he has used as well as indications on the duration of the game.

Your child will also not be able to play games that are not his or her age if you have blocked access to them, and you may also be able to restrict external communications with other players.

The multiplayer mode is an important point for all Nintendo consoles, many of which are also known to be family consoles as this mode is considered one of the main advantages. With the Switch, the multi mode is particularly developed thanks to its two options for playing with several people: you can play against or with human opponents locally or online.

On a television screen, the console broadcasts a Full HD signal  (1920×1080 px) , well below what the new consoles from Sony and Microsoft offer and this is noticeable at first glance. The level and quality of graphic detail are nowhere near equal to their competitors. But Nintendo’s bet of projecting the image of a portable console onto a TV screen is perfectly successful.

In portable mode, it’s totally different. Again, the graphics quality is not perfect.

However, the Nintendo Switch is undeniably the most powerful portable console on the market today.

The 6.2-inch screen projects 720p HD quality images, so you can enjoy your favorite title anywhere, with more than decent picture quality.

The Nintendo Switch only has 32 GB of storage. It is very little, and it will not allow you to download a lot of games if you prefer the dematerialized versions or if you are fond of indie games. In addition, the multiple console and game updates will also take up space on your console.

Increase space with an SD card 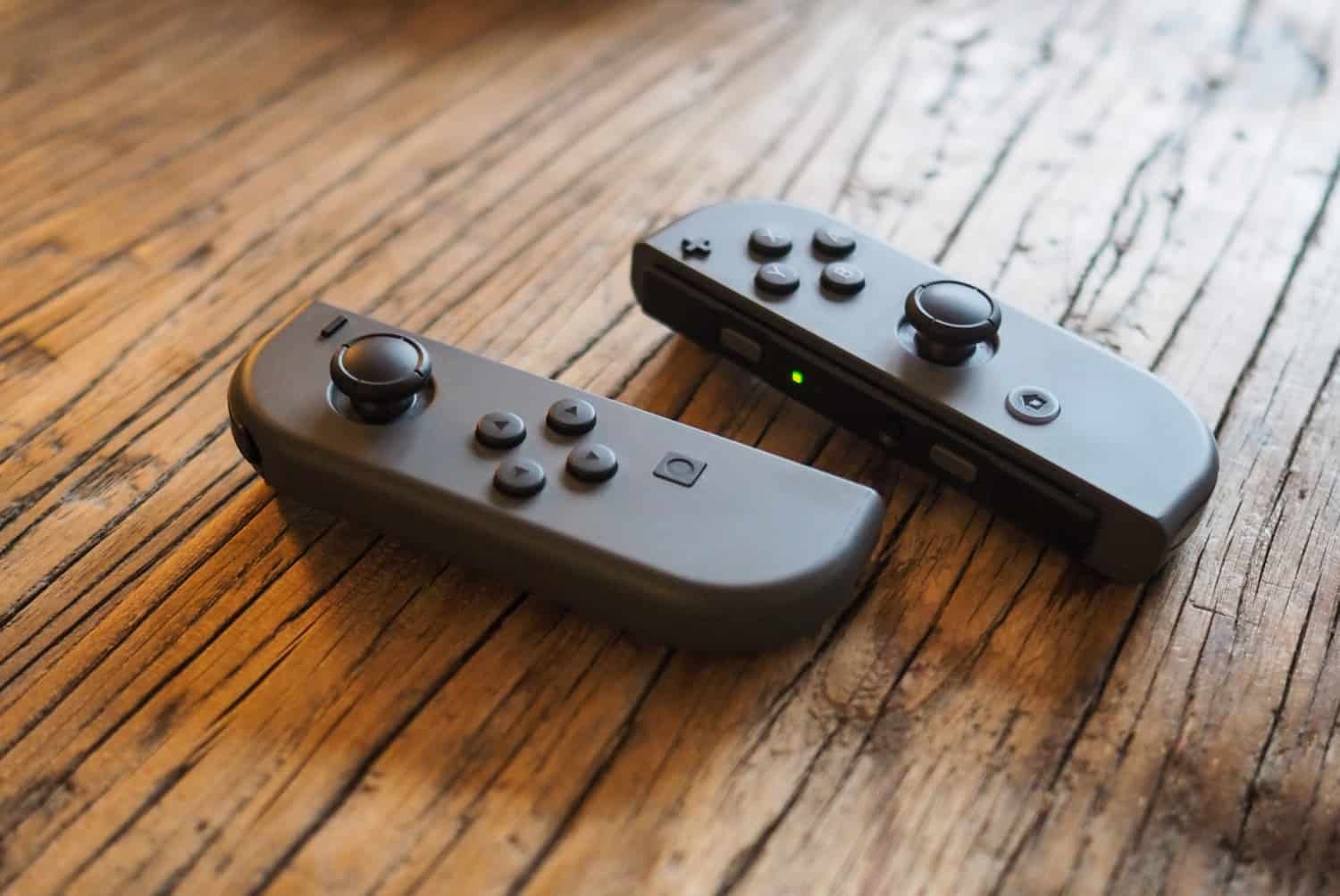 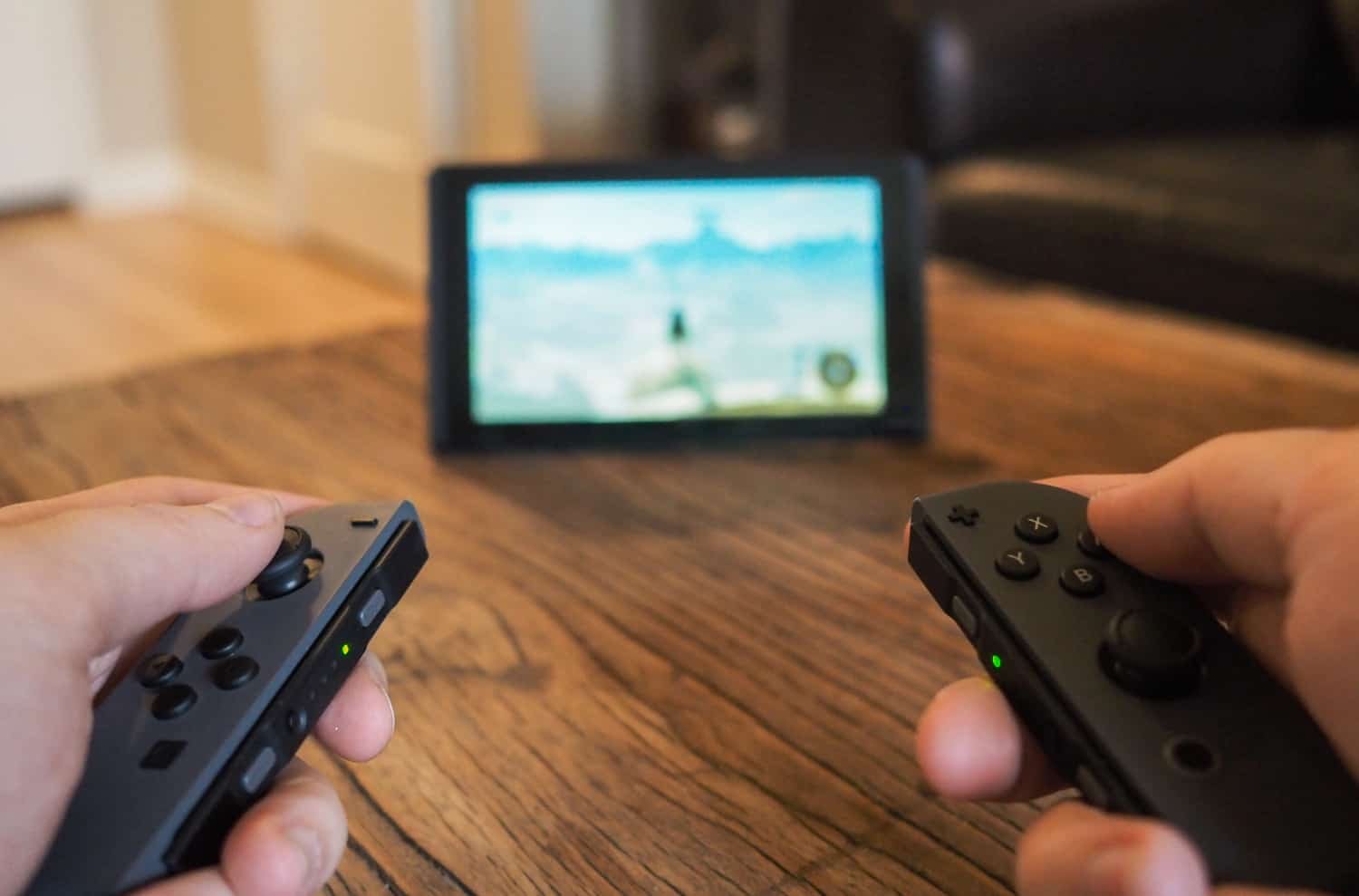 The Nintendo Switch is a portable console with great potential. Is the battery life up to par?

Since 2019, the Nintendo Switch has a new version offering almost doubled battery compared to the Switch of 2017.

You will indeed be able to go up to 9 hours of play, but rather allow 6 hours in pleasant conditions.

Previously, the Nintendo Switch offered on average only 3h30 of gaming in nomadic mode.

This evolution was made possible by the  “new” Tegra processor from NVIDIA. A more than welcome little revolution that totally reinforces the hybrid side of the console.

The Joy-Con allows you to play for about twenty hours.

In some cases, this will be enough for you to completely complete a game. The downside remains the fairly significant charging time, again from 3h to 3h30.

To recharge them, two options are available to you: hang them on the Switch screen and plug it into the mains, which will recharge the Joy-Con at the same time or recharge them alone directly via the dock.

To create an account, it is mandatory to be over 16 years old

it will be possible for a user over 18 to assign up to 5 different accounts to minors. Your account can be associated with your Nintendo Network credentials, as well as your social media accounts. However, this feature is only accessible for users over 16 years old.

Nintendo is committed to improving its services and features, which is why the  Switch can often be updated via the Internet.

If your console is connected to the Internet, updates will download automatically.

Do not hesitate to check once in a while in the settings if your console has its software up to date. It is mandatory to be able to play online or make purchases on the e-shop.

The great peculiarity of this console is that it can be used in portable mode as well as on television. It is the great strength of Nintendo that has succeeded in creating a hybrid console that can be used anywhere, whether you are at home or on the go.

In TV mode (or docked depending on the name you prefer), the Nintendo Switch offers a Full HD image at 1920 x 1080px. This is the ideal mode to enjoy the games in the best conditions, but also to tire the eyes less.

In portable mode, the Nintendo Switch displays your games in HD 720p. To play, you can choose to leave the Joy-Con on either side of the screen or to detach them to play as if you were in front of your television by fixing the Joy-Con in their support and putting them down. the screen horizontally, thanks to the small wedge located behind the Switch screen.

Nintendo has hit hard with its Joy-Con, which are original controllers to say the least. By their modularity, they revolutionize the world of joysticks. With their size much smaller than what we know and the possibility of separating them from the screen, we wonder what is the grip But also how they work? In portable mode, we will most often choose to let them hang on the screen although, for some actions, it will be easier to disconnect them.

To do so, nothing complicated. Just press the two small buttons on the back. Nothing too rocket science to connect them again to the console. In this configuration, they are fully part of the console and are pleasant to play. Although initially disconcerting by their size, the keys, joysticks or even triggers on the upper edge are quite ergonomic thanks to their location on the console as well as their shape.

In TV mode, we will see that several options are available to you. These will also be accessible in portable mode, but we let you imagine what a split-screen looks like on a 6.2-inch screen.

Bug Joy-Con drift, what to do if you have this problem

Joy-Con drift is the name of a Joy-Con bug that has become infamous as the number of Joy-Con touched is important. “Drift” is an English word meaning “to drift”. Joy-Con hit by the Joy-Con Drift cause unwanted movements, even if the joystick is stationary. This is very problematic, especially in games where one wrong move can cause you to lose the game. 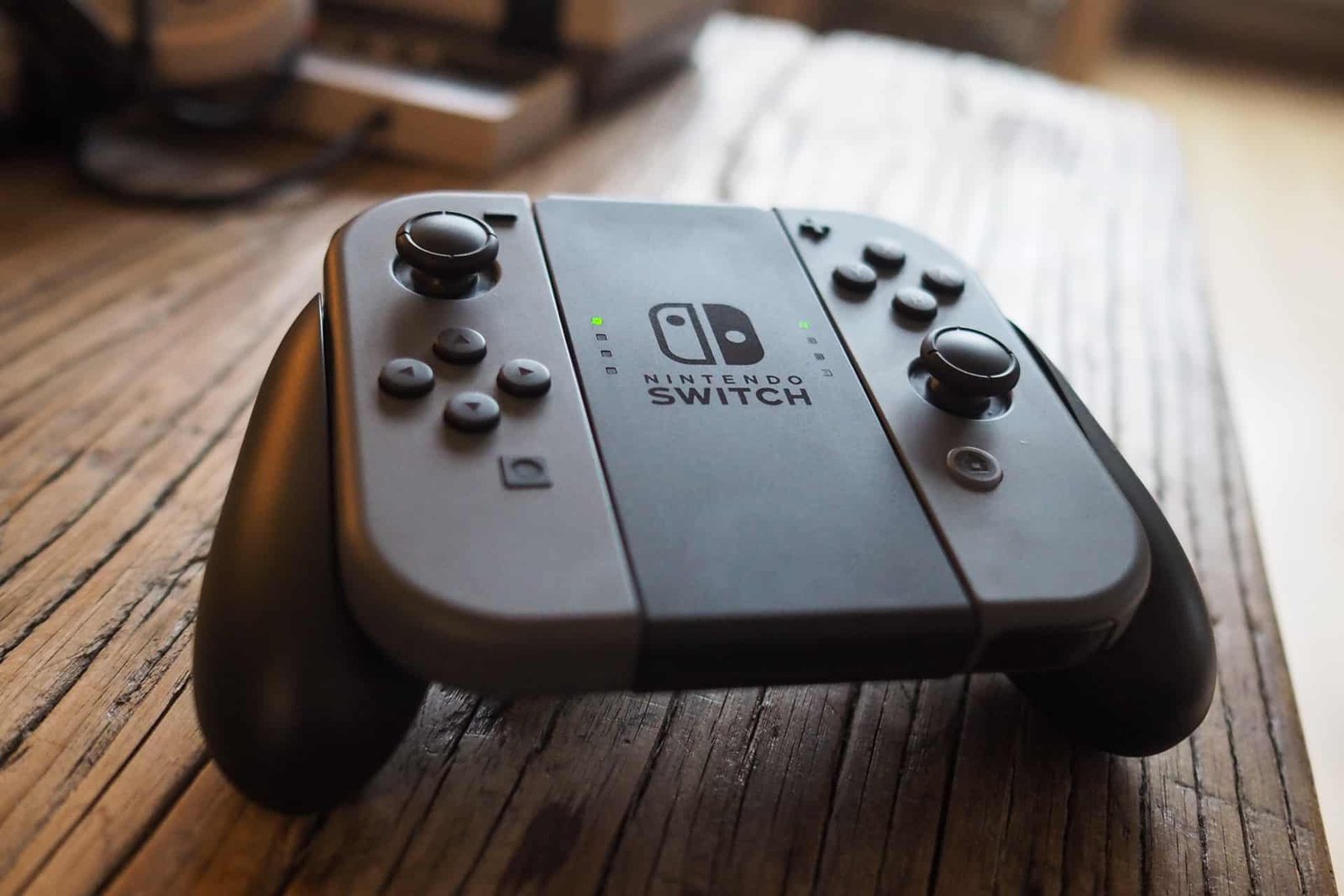 To get the lowest price, it’s best to take a switch on its own and buy a separate game. It is possible to find very interesting and advantageous promotional offers on Switch title console games and bundles!

If you are looking for a fun console, which you can play with anywhere, we can only tell you to buy this marvel.

The Ma Réduc team recommends acquiring a storage pouch and tempered glass screen protectors at the same time because the dock sometimes scratches the screen. The followers of dematerialized games will surely have to equip themselves with a Micro SD card because the Nintendo Switch only embeds 32 GB of internal storage.

The more time passes the more the price will be likely to go down, so there is no doubt that this little gem can be found at a relatively nice price. If you have the budget: go for it!

PS5 vs Xbox Series X: Which Console to Buy