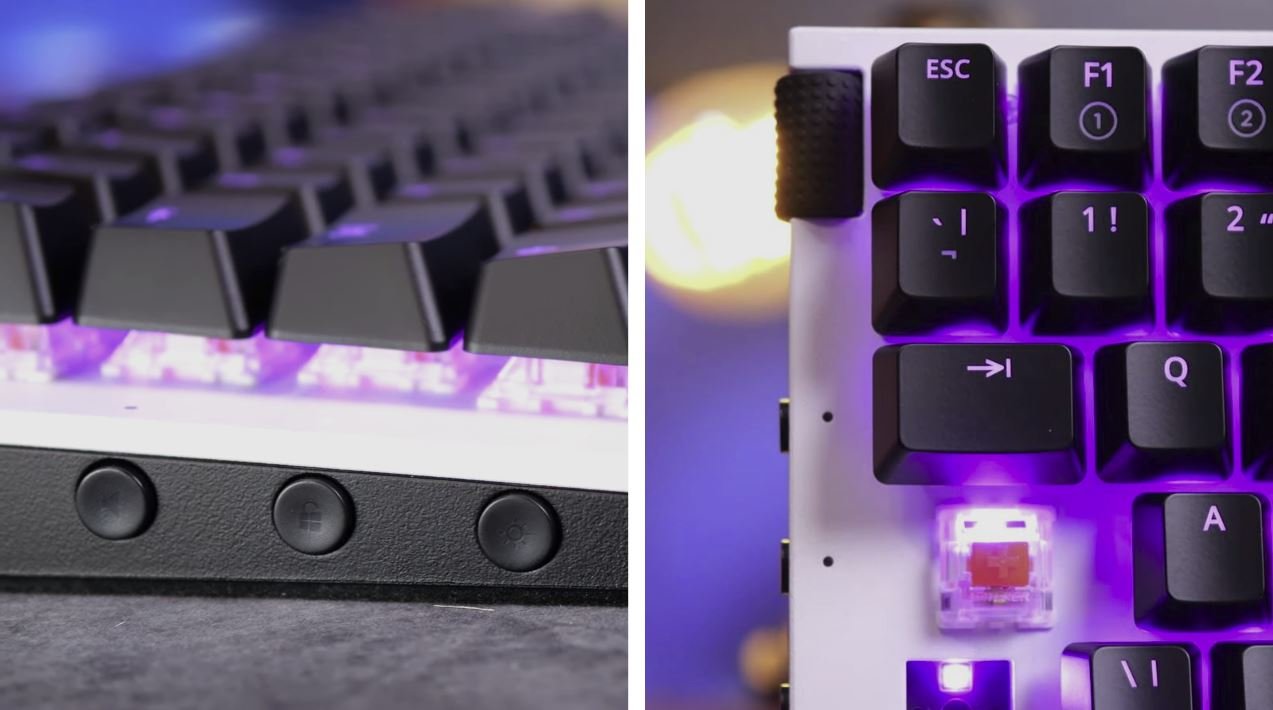 The NZXT Function MiniTKL is a compact, wired-only mechanical keyboard. It stands out for its original format and its “Hot-Swap” design allowing its switches to be removed, a fairly rare point on models with an Azerty layout.

The Function models bring enthusiast-class features to the mainstream segment. A special feature of the entire Function range is the interchangeable switches that fit into the appropriate slots. For retail models, NZXT uses Gateron Red line switches. But other Gateron switch options will be available for customized keyboards. The bottom row of keys is made in a standard layout, which allows alternative keycaps with cross fastening. The USB cable is removable to choose a cable of a different color, for example. The left side of the Function keyboards has additional gaming buttons and a volume rocker. 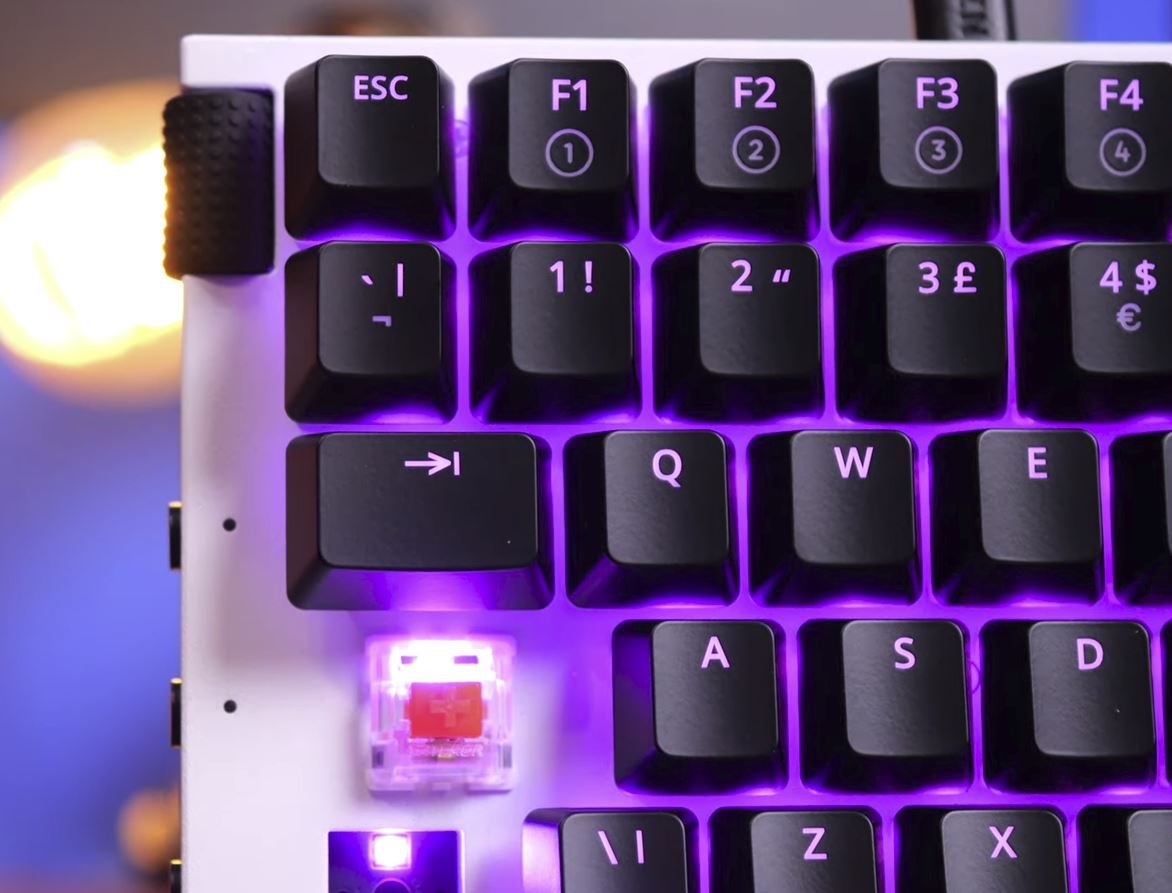 All Function models feature a functional design with a durable aluminum plate. Retail keyboards will be available in black and white. We received a full-size black model with a digital block for testing. The Tenkeyless (TKL) variant does not have a digital block. The Mini TKL is even more compact, with all the keys of the standard TKL variant, but they are closer together. Compared to the TKL model, the width of the Mini TKL has been reduced from 361.7 mm to 338.5 mm. Unlike the “older” versions, the Mini TKL keyboard comes without a palm rest. 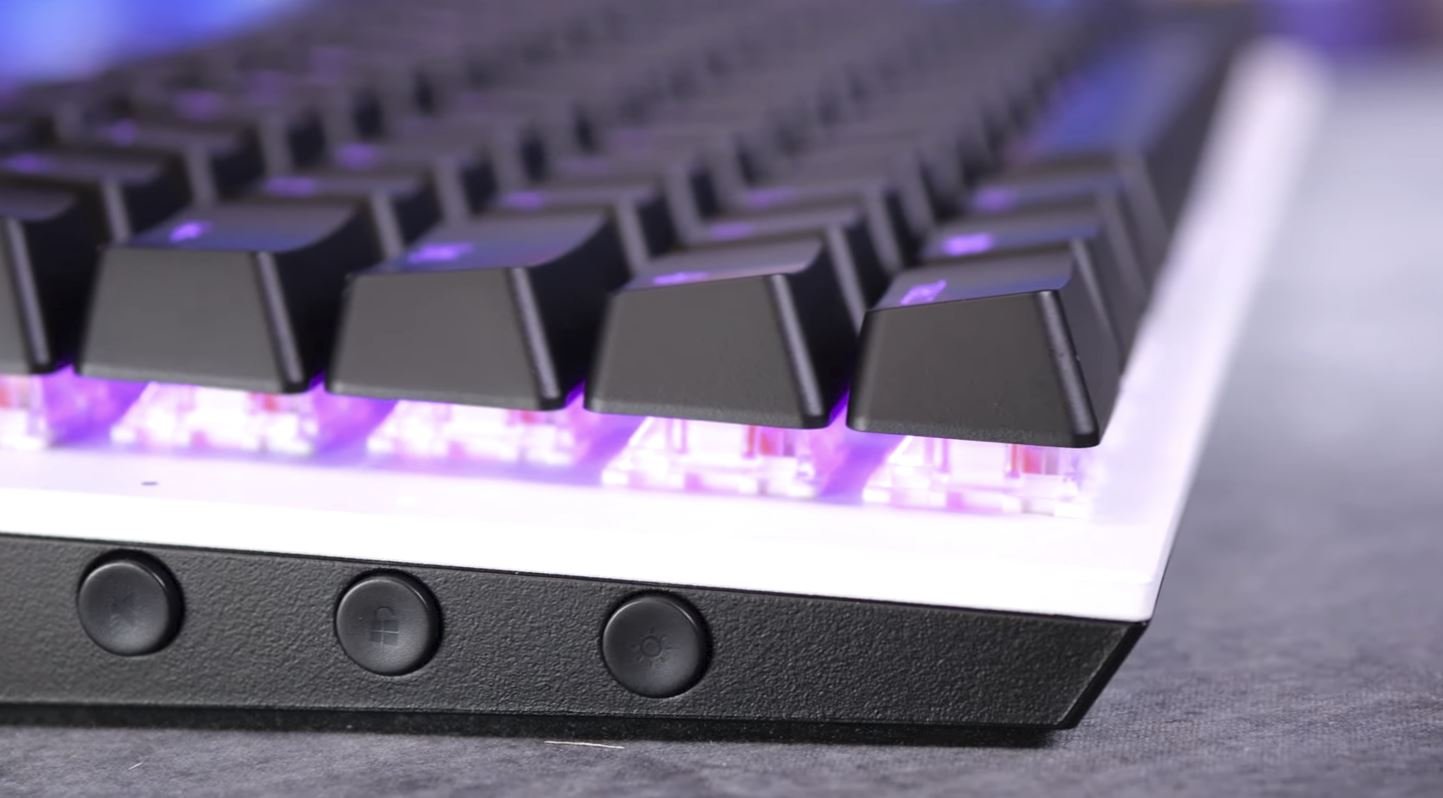 The Mini TKL comes with the following:

For this format called MiniTKL, NZXT is close to a so-called 75% format. It is a rather rare format in the sector, but it allows you to find all the keys of a TKL keyboard while benefiting from a more compact size. 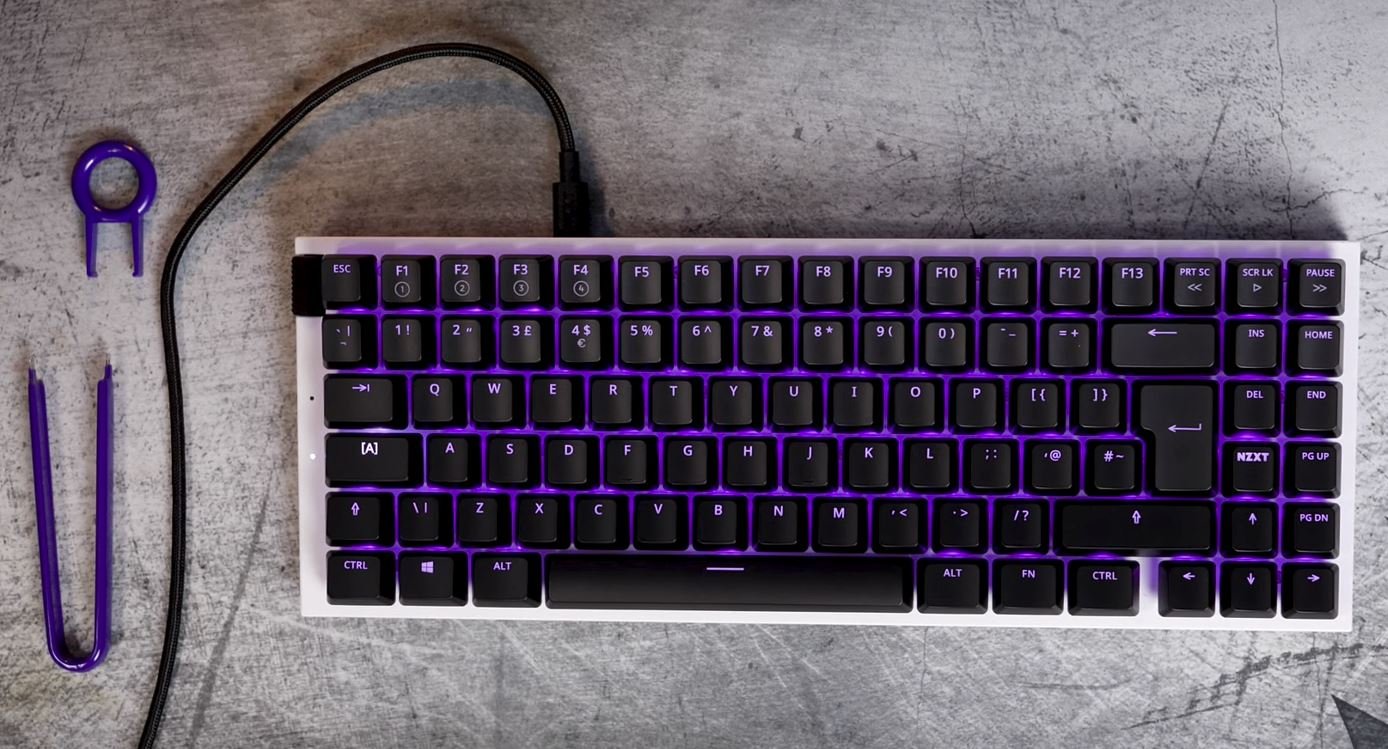 Here, as on a classic TKL model, the numeric keypad disappears, but the directional arrows and the control pad are retained. The difference lies in their positioning; the actions here are grouped in only two columns without the slightest gap on the keyboard’s left.

This original format and relatively thin edges allow the set to benefit from a compact size, with dimensions of approximately 338 x 123 x 40 mm for a total weight of 718 g. We are halfway between a 60% keyboard and a real TKL.

The keyboard is designed around a black plastic frame reinforced by an aluminum top plate in terms of general finishes. The latter is offered in black or white tones if you buy the basic keyboard and a gray version is available from the NZXT configurator.

Overall, the keyboard has a fairly decent design, and the whole thing withstands our usual tortures without any problem. The general look also goes well with the brand’s usual charter, namely sober and minimalist lines. Visually we find the whole quite successful on our side!

Function keyboards come with ABS plastic models if you opt for the basic versions on the keycap side. If you design your keyboard via the NZXT configurator, you can choose models in PBT which are more resistant and more durable. For once, we would have liked to find models directly in PBT on the versions sold in the trade.

Some shortcuts are accessible in combination with the Fn key. In particular, you can manage your media and switch from one music to another via the Print Screen / Scroll Lock / Pause keys or even switch between its different configuration profiles via F1 to F4.

If the MiniTKL is original in its layout, this is also the case with its additional controls. To adjust the sound volume on the fly, a wheel is integrated on the left edge of the keyboard, not on the upper part, as is often the case with the competition.

Its textured rubber coating is easy to access, and the idea is rather good from NZXT. It integrates discreetly into the chassis and limits the size of the keyboard once placed on its desk. Each notch increases or decreases the volume by 2%.

Still, on the left edge, there are then three buttons allowing respectively to mute the sound, lock the Windows key, and adjust the lighting intensity. It is rather practical, even if we regret that it is impossible to reconfigure the action of these buttons or the wheel via the NZXT software.

The rest of the keyboard is rather simple. There is a USB-C connector on the back edge to power the MiniTKL. The keyboard comes with a 2m black cable, but the brand offers optional colored models from the NZXT site for around 10$. However, their design remains identical, and we would have liked to find coiled cables, as we see a lot in the world of custom mechanical keyboards. We imagine that the option will soon be available.

5 rubber pads keep the keyboard in place at the back once placed on your desk or mouse pad. Two retractable feet in two heights can be used to adjust the tilt of the keyboard.

NZXT Function keyboards can be configured and customized via the brand’s website. From a very intuitive form, it is thus possible to select the basic options of the keyboard with its size, color, the layout of the keys, or the language.

We can then go into a little more detail by selecting the mechanical switches used among different models from Gateron, the color of the keycaps (here in PBT plastic against ABS on the basic versions), or even that of the cable. Finally, you can opt to receive everything already assembled or not.

Depending on the options selected, the final price of the keyboard can vary from simple to double. So, if the NZXT MiniTKL is only displayed at 109$ in its basic version.

The NZXT Function keyboard range is compatible with NZXT CAM software. This is the same tool that already manages the brand’s fans or AIO water-cooling kits. 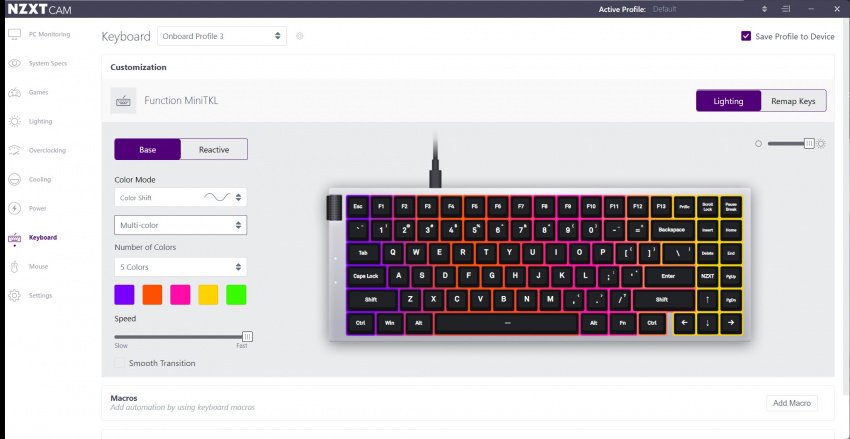 The software allows you to create different configuration profiles and import up to 4 of them into the internal memory of the MiniTKL. It is fully translated into French.

From the main tab, we can first manage the keyboard’s backlighting. Here the brand offers the usual effects, with static lighting, customizable gradients, or even a wave of color. Each key can be configured independently, and overall, everything works pretty well, even if some competing software can be a little more intuitive.

A second tab allows you to modify the mapping of the keyboard keys, and a second mapping is accessible via the FN key. The possibilities are really basic since it can only affect keyboard actions. No list of additional commands is available, such as opening an application, a folder, starting a timer, etc. 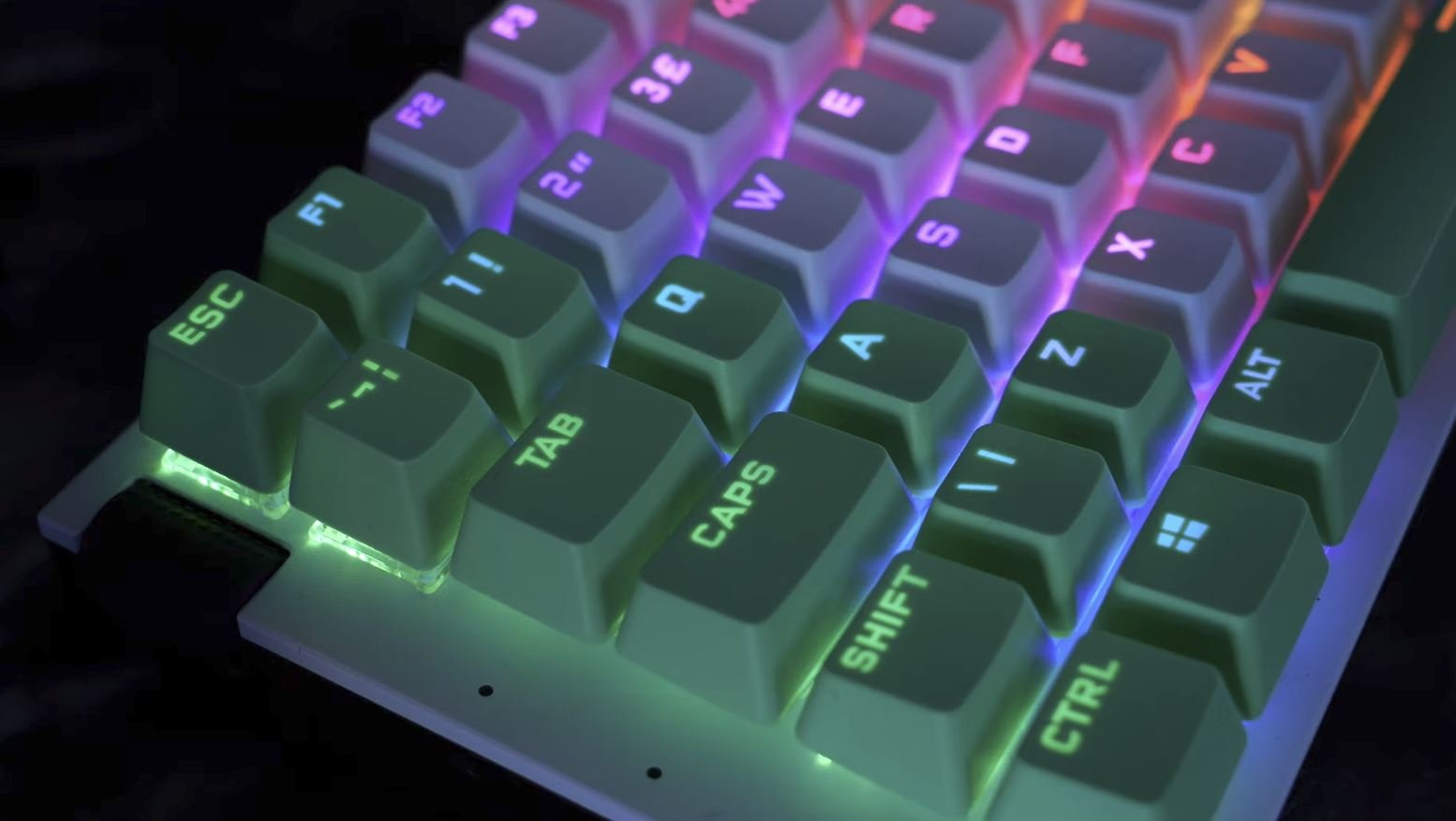 The procedure for changing the assignment of the keys is also not very intuitive since it is not possible to press the key in question to configure it. You have to select the desired command on the left and drag it to the target key. In short, all this remains to work for NZXT.

Below, an insert allows you to record macros or program them manually. The possibilities are again very basic since it is only possible to assign a basic action of the keyboard. Also, some bugs are still present if you configure your macros at home. For example, by choosing the letter A, the macro outputs a Q (probably an Azerty/Qwerty mapping problem in the list of choices). Also, only the FN key can be combined with another key to launch a macro.

Finally, it is possible to lock the Fn and Windows keys and select the keyboard’s geographical region. 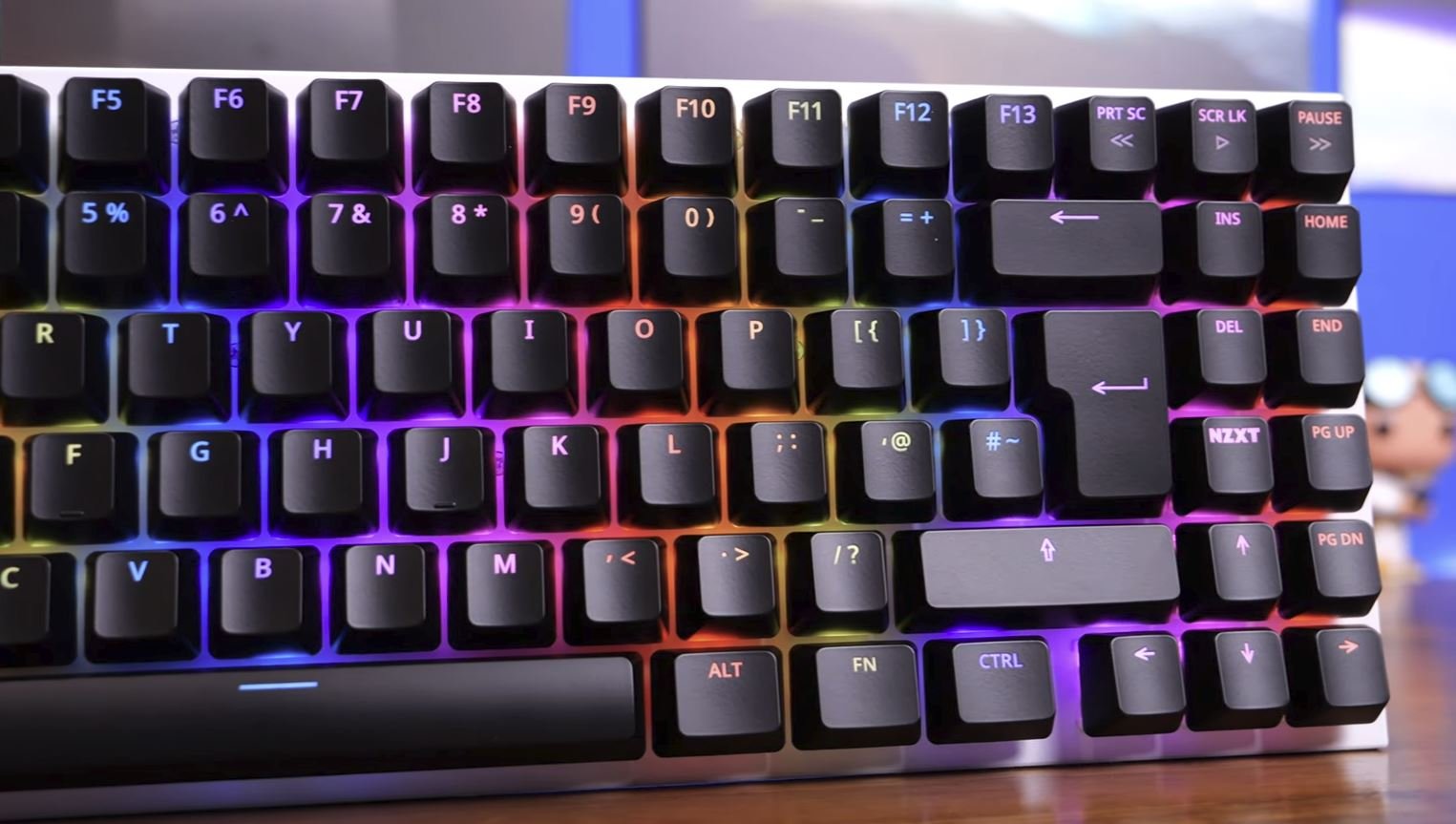 NZXT Function models on Gateron Red performed well. Paired with a palm rest, the keyboard allows you to work for many hours comfortably. Linear switches do not provide tactile feedback at the actuation point, but this is a matter of taste and habit. Typing on the linear switches is also convenient, although we would have preferred clicky tactile ones. In games, on the other hand, it is the Red linear switches that show themselves best. With the TKL keyboard, the mouse and WASD keys are closer together, which is also appreciated by many gamers. But you have to abandon the digital panel.

The most important point is that the NZXT Function keyboards come with a so-called “Hot-Swap” design. The switches are not directly soldered to the PCB, and it is possible to remove them to replace or lubricate them. If you go through the NZXT configurator, it is even possible to order the keyboard without any switches and then install those of your choice.

For once, very few models with an ISO layout (Azerty) offer a “Hot-Swap” design. The rare models can be counted on the fingers of one hand, with a few references from Glorious and Keychron. What potentially get started in the world of custom mechanical keyboards without having to move towards ANSI provisions.

The typing is flexible and pleasant regarding the Gateron Alias Silent switches fitted to our model. The “tactile” side of activation is more pronounced than traditional Cherry MX Browns, while activation is particularly silent.

For a first attempt in the world of mechanical keyboards, NZXT manages to stand out from the current competition by offering original formats and a “Hot-Swap” design facilitating its customization. A point that is still very rare on ISO Azerty models and could allow the brand to do well and position itself as an interesting gateway to the world of custom keyboards.

If you opt for its basic version, the NZXT Function MiniTKL is offered at 99$. It is a rather attractive price compared to the competition, but note that it will have to do with ABS keycaps and Gateron Red switches.

The “custom” versions, allow you to take advantage of many advantages, particularly with much higher quality switches, PBT keycaps, or even more choice in terms of keycap colors and cable. Interesting options, but which quickly increase the bill, even doubling the price of the keyboard.