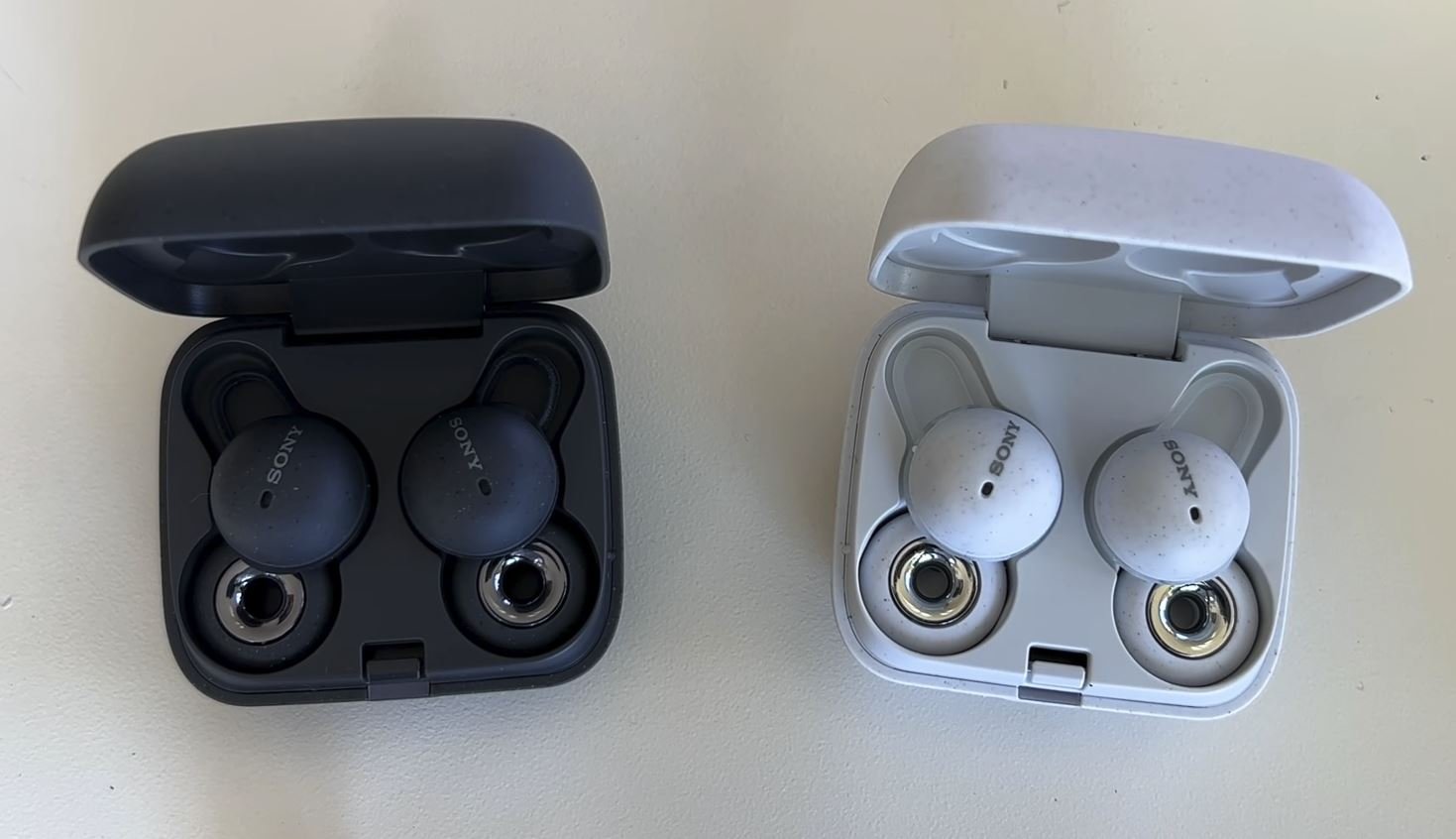 Sony has released a uniquely designed full wireless earphone, Link Buds. Adopting a ring-shaped screwdriver and making it a doughnut-shaped unit makes it easy to take in outside sounds, it is hard to get stuffy, and it is expected that there will be less stress even when wearing it for a long time.

Sony is already a known and recognized manufacturer in audio and, in particular, portable audio. The firm thus offers its WH-1000XM4 headphones and its wireless noise reduction headphones, the WF-1000XM4, the market benchmarks. The Japanese manufacturer is also not stingy with more accessible products with its WF-C500, which are particularly convincing. But it still lacked a reference of wireless headphones with an open format. It’s now done with the Sony LinkBuds, and, once again, Sony hasn’t done things by halves. 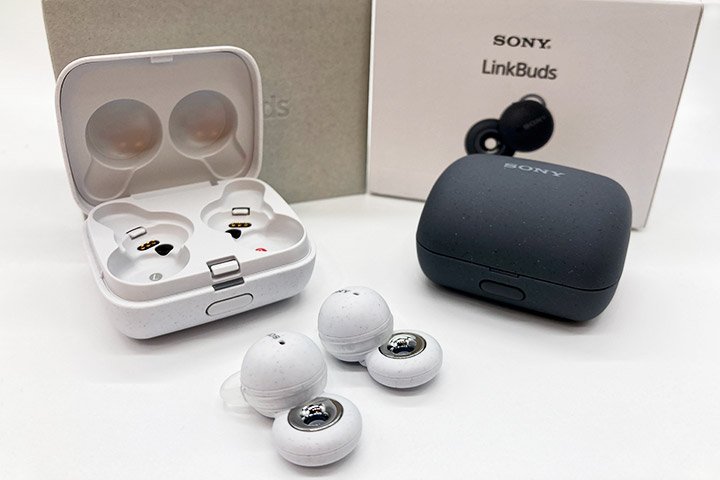 Almost six years after the first wireless headphones from Apple, and while the very good Airpods 3 were released a few months ago, the Japanese manufacturer intends to revitalize the sector of earbuds by adding its paw and its innovations. Are the Sony LinkBuds WF-L900 up to the task of making this particular format attractive at an already high price (200 USD)?

The first thing that strikes with the Sony LinkBuds is their main characteristic: an original design. Sony not only offers headphones here that aren’t in-ear but also don’t offer a standard open format, like the AirPods 3, Huawei FreeBuds 4, or even the Samsung Galaxy Buds Live. Here the earphones are perforated. 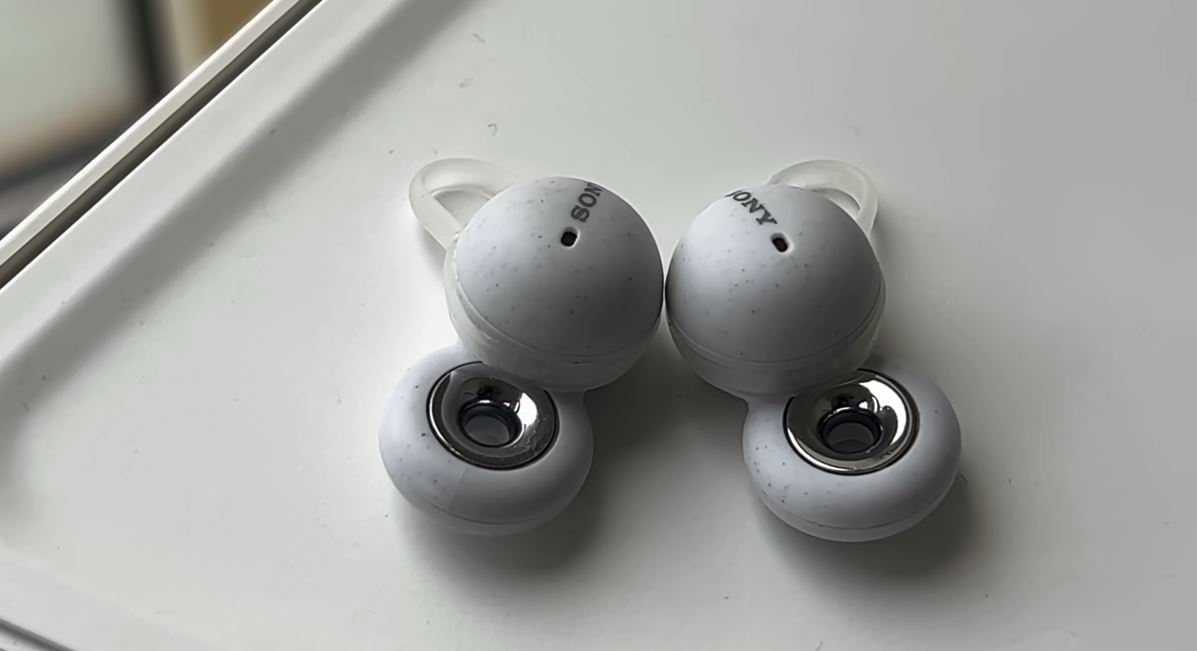 Sony LinkBuds WF-L900- The design of these LinkBuds is extraordinary and will inevitably divide users. Still, it raises questions: the few people who noticed our strange Sony headphones asked us about the function of these curious saucers. Aesthetically, it should be noted that as often with Sony products, the LinkBuds exist in a black version and a white/cream version. 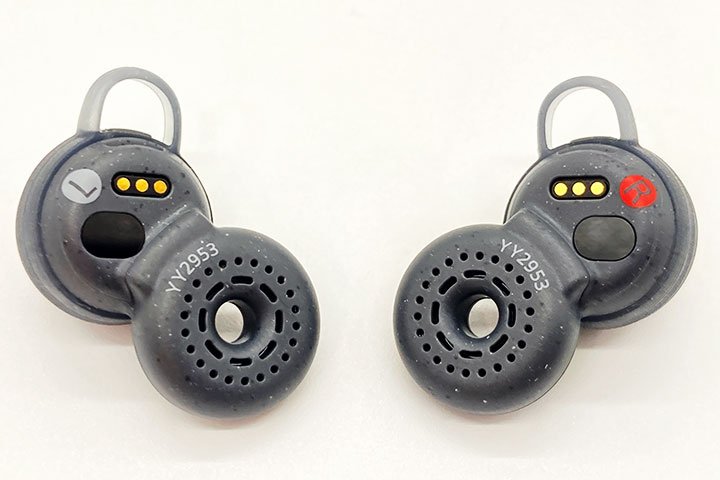 The main attraction of this original format, the Sony LinkBuds, is light headphones. They only weigh 4.1 grams on the scale and appear to be 51% more compact than the WF-1000XM4. Admittedly, Sony’s noise-canceling headphones are beautiful babies, but it’s clear that the LinkBuds stand out for their compactness.

On the other hand, this compactness is not without problems. This is the main problem; the headphones do not have silicone tips and do not benefit from passive isolation. Even more, the hole in the middle of the earpiece deliberately lets ambient noise through. In principle, why not. It allows you to hear nearby vehicles, not cut yourself off from colleagues in the office, or be informed of voice announcements in a station. But in fact, this lack of passive insulation leads to much greater discomfort.

When you are not in a tranquil environment, you will have to turn up the volume, sometimes to the maximum, to hear your music without being bothered by noise pollution.

The IPX4 certification does no more or less than most headphones on the market, so it’s hard to take that as a real advantage, but we won’t nitpick on this point since the LinkBuds do about as well Airpods 3, especially being less messy. 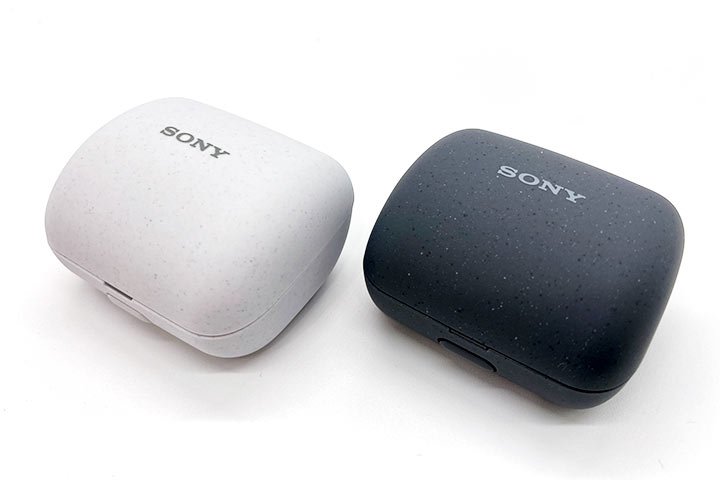 On the housing side, Sony has played the card of compactness. The Sony LinkBuds case is thus particularly compact, 26% less bulky than the WF-1000XM4, and weighs only 34 grams.

Conversely, the case density is a little low for such an ambitious product, particularly the cover. Sony has integrated a small latch system with a release button to avoid accidental openings. Once pressed, it allows the box to open by itself via an internal spring.

On the comfort side, however, Sony masters the score. The particular arrangement and the fins allow the earphones to fit perfectly in the ears once the right size and the right position have been found, which requires a few tries at the start. Once found, it is possible to use the LinkBuds as sports headphones without fear of seeing them fall.

Note, however, that Sony does not perform miracles for users with a tiny ear hollow: the LinkBuds will not suit them, regardless of the tips chosen.

We explained it to you in a dedicated file traditionally, the transducers of headphones or earphones have a disc shape. This is why we talk about the diameter of these transducers, expressed in mm. For its LinkBuds, Sony had the original idea of ​​offering ring-shaped transducers. Concretely, we will always have a diameter, of 12 mm in this case, but which is not filled. This is a first for wireless headphones and a format that has the main advantage of allowing open and airy sound, if not isolated.

In addition to this new transducer, the Japanese manufacturer has indicated that it has integrated a new DAC and amp into its headphones. The LinkBuds nevertheless recover the Sony V1 processor, already used on the previous WF-1000XM4. Finally, for Bluetooth audio codecs, the Sony LinkBuds only benefit from AAC and SBC. Unfortunately, the LDAC is indeed not available.

Microphone- Sony uses an algorithm called Precise Voice Pick Up for voice calls. Concretely, it is the same system already used on the Sony WF-1000XM4, which will make it possible to make the voice clearer during calls by concentrating the microphones on your voice rather than on the noises around.

In a quiet environment, Sony headphones manage to filter your voice well for your interlocutor. He will hear a slightly compressed sound, but nothing annoying; the conversation will be pleasant on his side with good sound reproduction. Outdoors, the headphones manage to reduce ambient sounds admirably, whether it is the noise of vehicles, cars, motorcycles, the sounds of the wind, or the chirping of birds. Only conversations close to you will filter slightly and be audible to the person on the line.

Sony’s headphones are compatible with Google Fast Pair and Microsoft Swift Pair for Bluetooth pairing. In concrete terms, all you have to do is open the case to see an invitation to connect the headphones appear on the screen of your PC or smartphone.

The pairing button is also present on the back of the case to initiate the connection on a second device or to connect to a source compatible neither with Fast Pair nor with Swift Pair – such as an iPhone for example.

For the controls themselves, here are those offered by default by Sony: 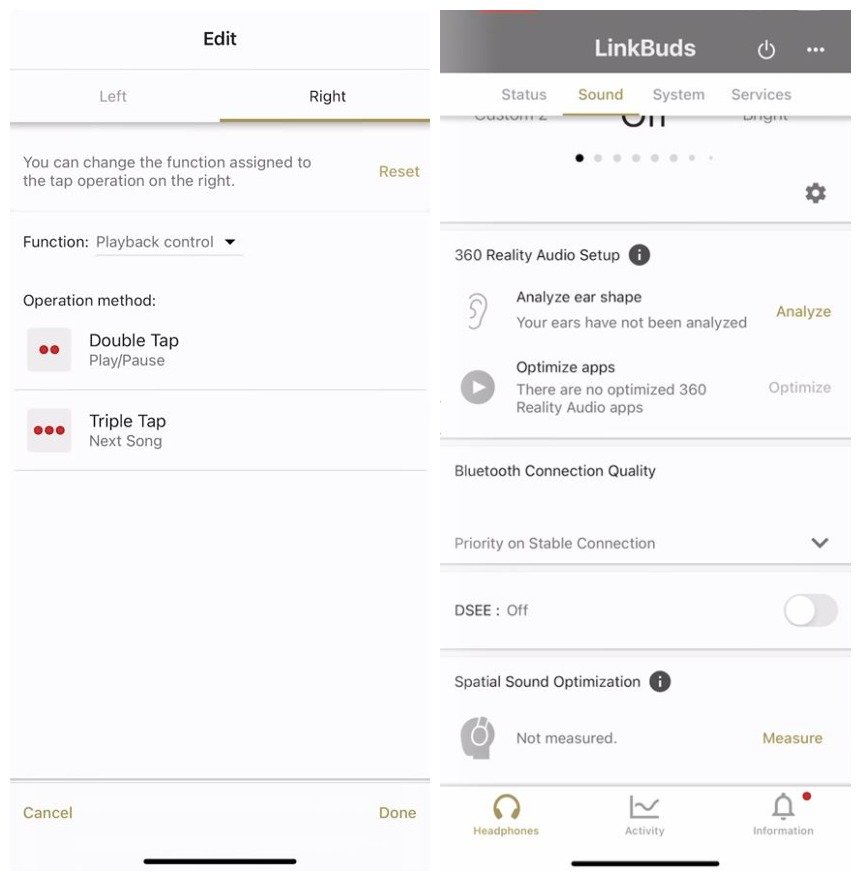 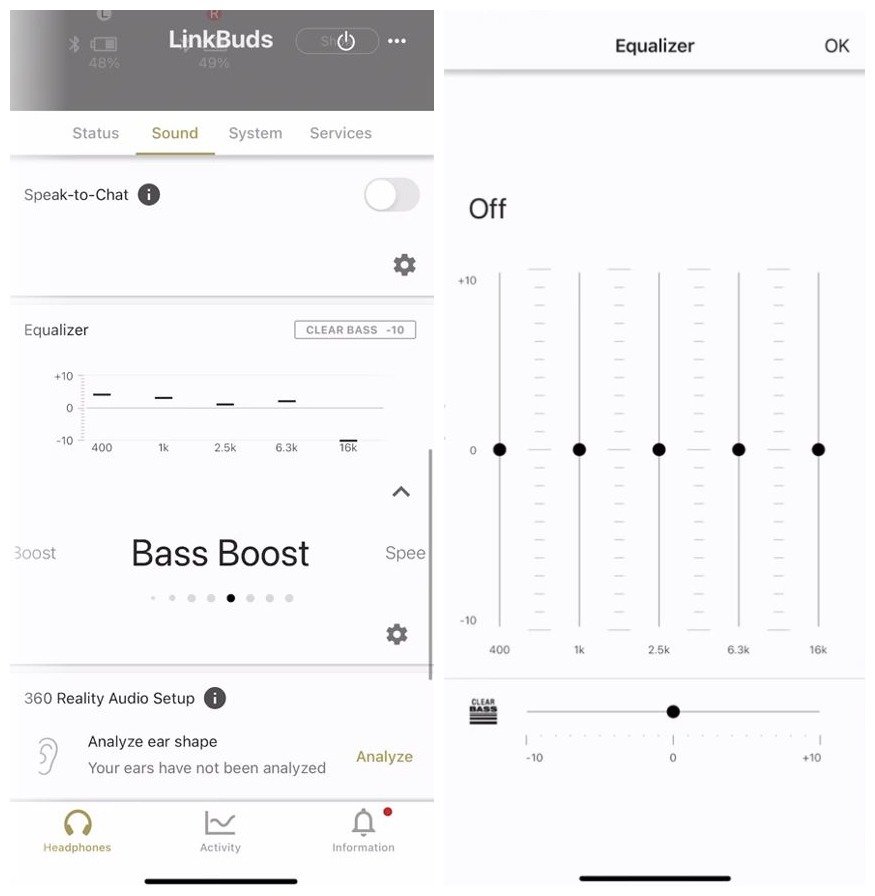 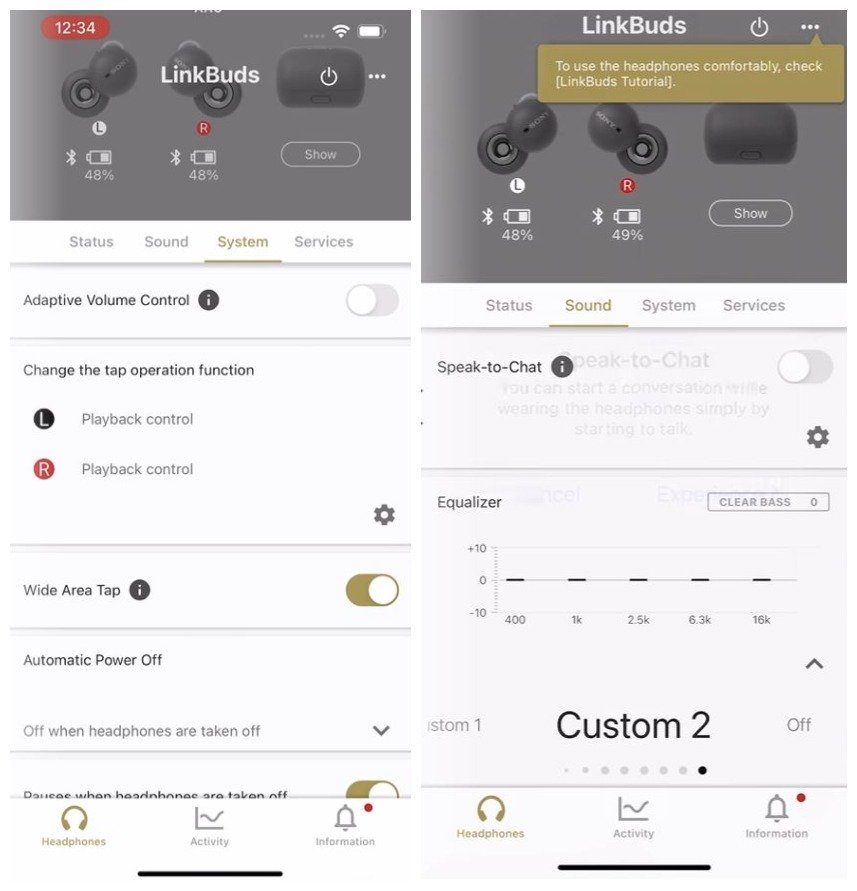 Unfortunately, on connectivity, Sony misses out on the quality of the WF-1000Xm4. If the announcement of the LinkBuds and their already ambitious price orientation could lead us to think that the multipoint connection (connection to several devices) would be on the program, it is not so. However, it is difficult to take this as a defect, as devices with this function are rare.

Less surprising, but still complicated from a marketing point of view, is the absence of an LDAC codec which would have been perfectly useless as the contribution is already barely audible on fairly high-end in-ear headphones. Nevertheless, the manufacturer misses the opportunity to pose a certain standing. Thus, only the SBC/AAC couple is available.

For the rest, nothing to say, the headphones work in sniffing mode and not in master/slave mode, so they can each be used in mono. For quick pairing, the manufacturer integrates both Google Fast Pair (for Android) and Swift Pair (Windows).

The quality of the connection is excellent, with perfect range, the result of specific know-how which could still have led to more ambition.

According to the manufacturer, Sony announces battery life of up to 5hours 30m for its LinkBuds, with 12 additional hours thanks to the charging box, for a total of 17h 30m of use.

Simply place them in their case and press lightly until you hear a slight click to charge the headphones. For charging it takes just 48 minutes to bring them from 0 to 100% battery. In other words, while the earbuds charge quickly, they’re pretty quick to retrieve their case.

The case is recharged using the USB-C socket on the back – Sony provides a short cable but no mains charger. However, it is not compatible with Qi induction charging.

Comfortable and suitable for sports use, easy to use, not perfect, but very pleasant and innovative in terms of ergonomics, the LinkBuds earphones also benefit from good microphones and more than adequate autonomy. In short, without revolutionizing the genre, they had everything to please lovers of button headphones.

The Sony LinkBuds is available in two colors: white and black. They are available in market for 200 USD. For their price, it’s hard to recommend the Sony LinkBuds. We understand the logic of the Japanese manufacturer who wishes here to offer a credible alternative to Apple’s AirPods 3.

The Sony LinkBuds lack bass and offer a far too dry sound to be pleasing to the ear. They also lack punch, and the lack of passive isolation and noise reduction will cause users to constantly turn up the volume to the maximum to enjoy their music in noisy conditions.

We can also regret the rather average battery life of the headphones, the absence of wireless charging, multipoint Bluetooth or LDAC codec, and their average comfort, which pushes you to choose between good sound and pleasant wearing.

Honor Earbuds 2 Lite vs HUAWEI FreeBuds 4i: Which ANC Earbuds is Better