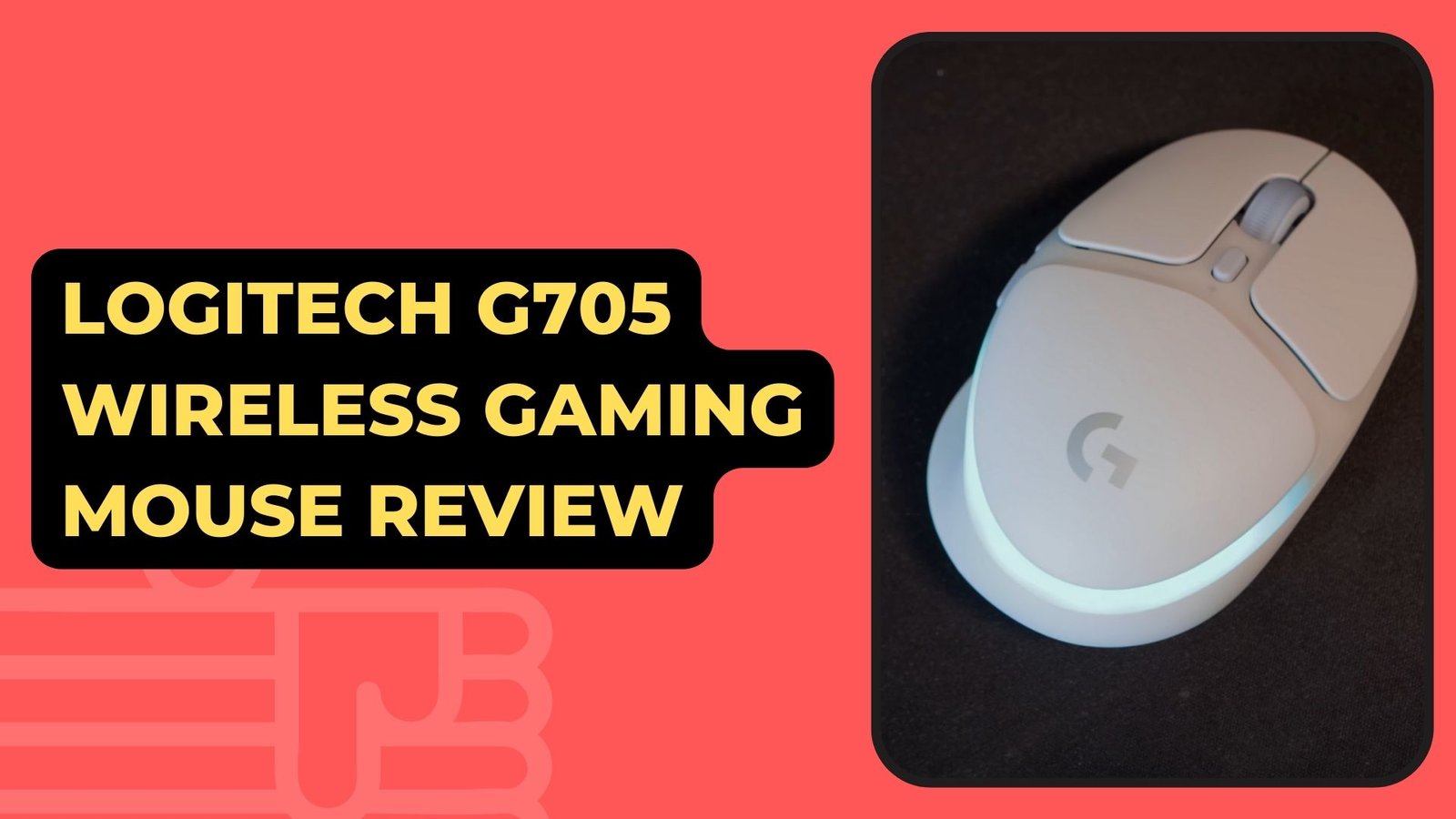 The Logitech G705 wireless mouse is simple and effective. Because of its compact size, it is ideal for players with small hands. We like that it has a unique look and works well, but at $99.99, it is still more expensive than many of its competitors, which are often more complete.

The Logitech G705 does not appear to be a gaming mouse at first glance, thanks to its compact size, rounded lines, and white color. But a closer look at its technical specs shows that it has everything: a 2.4 GHz Lightspeed wireless connection, 6 programmable buttons, an 85 gram featherweight, an 8200 DPI optical sensor, and, of course, RGB lighting. Can it really find a place in this increasingly competitive sector at a manufacturer price of $99.99? After ten days by his side, he responds. The mouse comes with a USB-C to USB-A cable for charging or wired use, a USB-A dongle for the 2.4 GHz connection, and a USB-C to USB-A adapter on the inside.

The Logitech G705, like the other Aurora peripherals, clearly relies on its design to appeal to gamers, and perhaps even more so, gamers! In addition to having very soft lines, the mouse is also very small, which means that even the smallest hands will be able to use it. 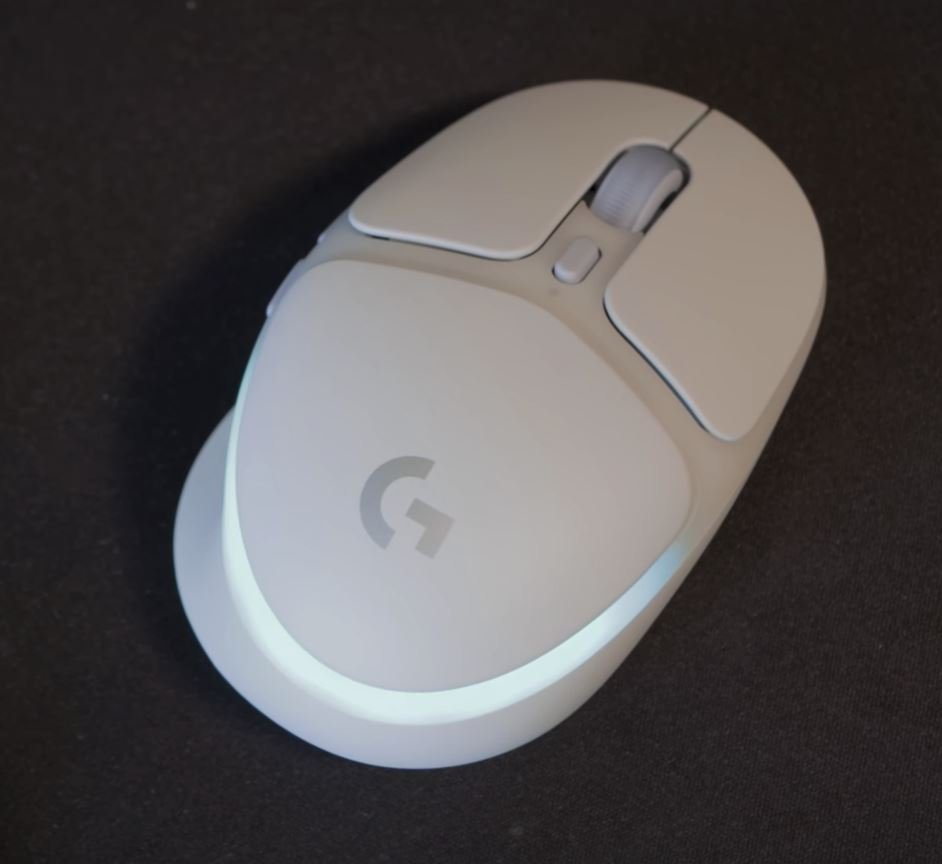 The model is 105mm long, 68mm wide, and 39mm tall, making it one of the smallest in the industry. People with big hands may find it hard to use Logitech’s newest G. These dimensions also allow the mouse to have a relatively light weight of only 85 g.

So, while the G705 is not as light as its cousin, the Logitech G Pro X Superlight, or a Razer Viper V2 Pro, it still allows you to enjoy good maneuverability while limiting fatigue during the longest gaming sessions.

The mouse’s ergonomic shape and small size make a claw grip or fingertip grip the most natural way to hold it. Individual preferences will influence the level of comfort. Even though they are about the same size, we think the Razer Orochi V2 has a more secure and natural grip. 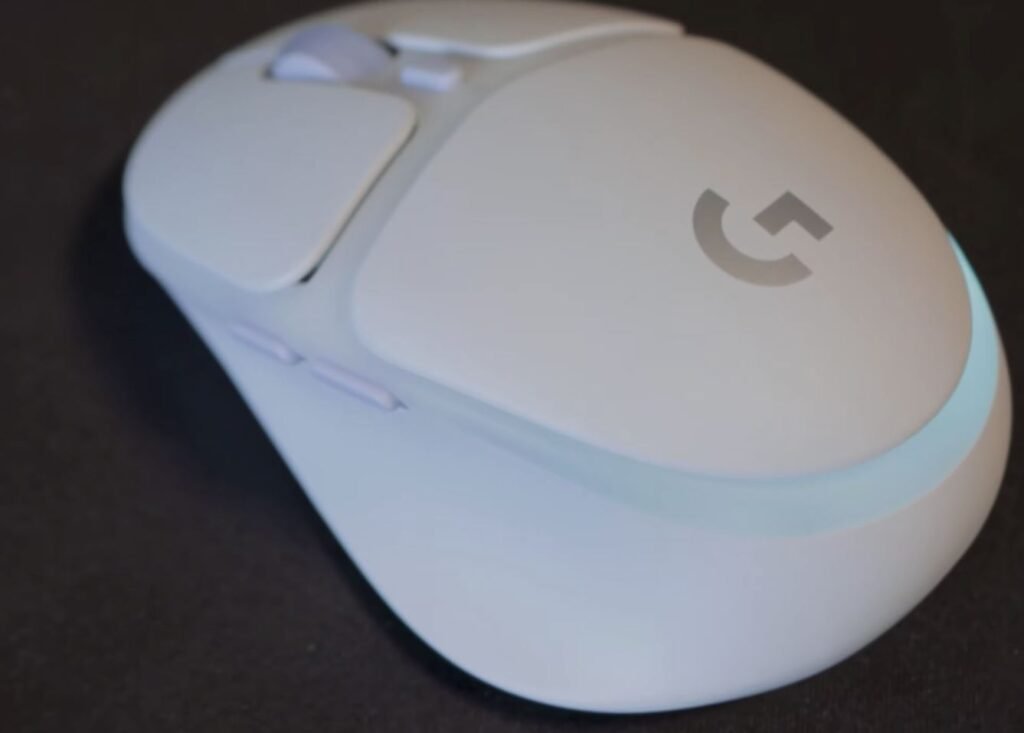 The G705 is made of white plastic with a few frosted areas to make it look nice. Overall, the design is very good. It has a modern look and a small amount of customization in the form of an RGB lighting zone on the back. When the mouse is shaken in all directions, nothing moves, and the assembly does not crack.

In terms of controls, the G705 is straightforward, with only 6 programmable buttons. Despite a slight pre-travel on our copy, the M1 and M2 buttons are responsive. Nothing negative. However, the palettes of these two buttons can move quite far laterally, even overlapping. Although there is little chance of this happening in the middle of a game in practice, a little more space between the two buttons or a more secure fix would not have hurt. 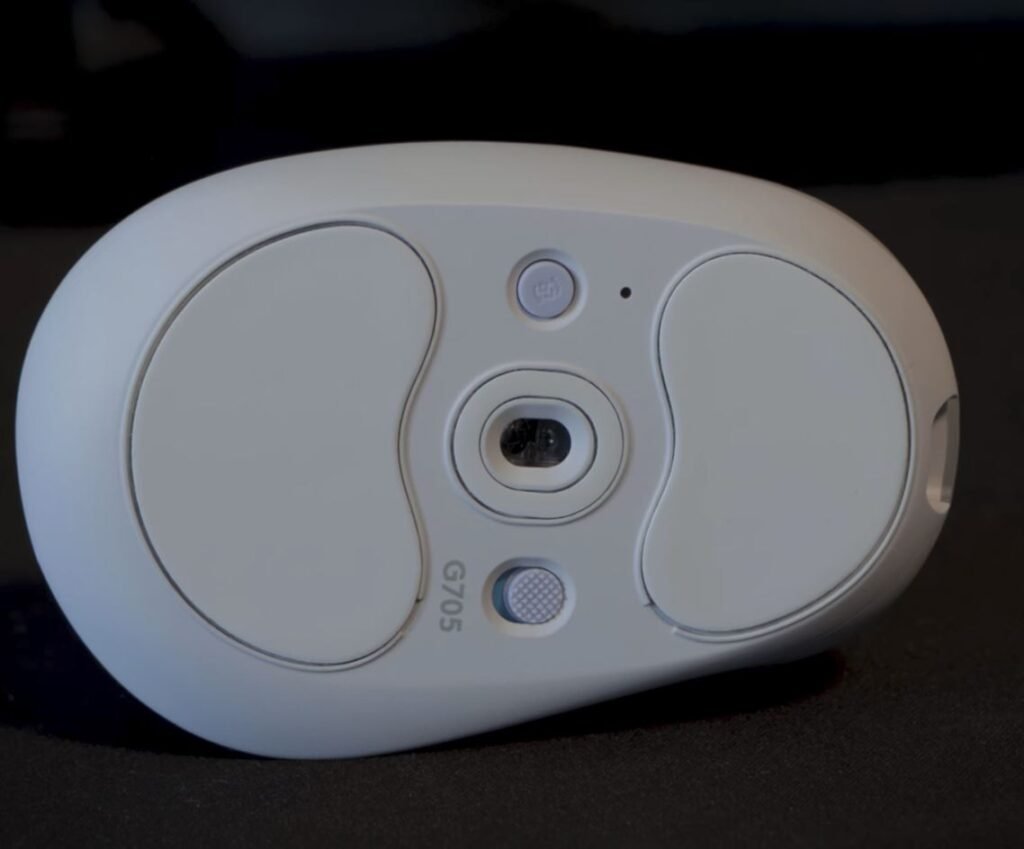 Between these two buttons is a small wheel with clear notches but a smooth coating, which we don’t like. A button on the back allows you to switch between DPI levels by default.

The last two buttons are on the left side of the mouse, as it is primarily designed for right-handed users. They are particularly compact, but remain easily accessible, and we appreciate their convincing touch activation. Two large PTFE pads on the mouse’s back ensure proper sliding on most surfaces. There is also a final button to switch between connection modes and a switch to turn the mouse on or off.

The tiny Logitech G705 lacks the brand’s HERO 25K optical sensor, unlike the G Pro X Superlight or the G303 Shroud Edition. We are limited to a model that can reach 8200 DPI, and the brand does not provide any additional information about its speed or acceleration limits.

Even though this model is good enough for most players, we would have liked to find a better one for around $100. In comparison, the Logitech G305, which also works wirelessly and is frequently found for less than $50, has a better optical sensor.

In practice, this option could affect how well players who are used to moving their mouse quickly do in the game. In these cases, the sensor may “win” and you may lose precision on your favorite FPS. Because of this, we won’t necessarily recommend this model to the most picky players, even though the G705 will work well enough for most people.

The mouse connects via USB-C, Bluetooth, or 2.4 GHz Lightspeed via the USB dongle. Like most devices with similar connectivity, we recommend using Bluetooth mode for work tasks and games that don’t require perfect responsiveness. Bluetooth’s latency isn’t optimal for FPS games, despite its development.

The latency for games on the 2.4-GHz Lightspeed connection is 1 ms, which is the same as for wired connections. Our tests showed no issues, and the little USB key automatically connected. Note that you can lift the plastic at the palm rest of the mouse to find a place to store the dongle so you don’t lose it while traveling. But it seems impossible to connect the mouse via Bluetooth to many devices and switch between them.

The Logitech G705 works with the Logitech G Hub software, which can be found on the website for the brand. If you already have G Hub, you don’t need to reinstall it, and all you need to do to get mouse options is update it. 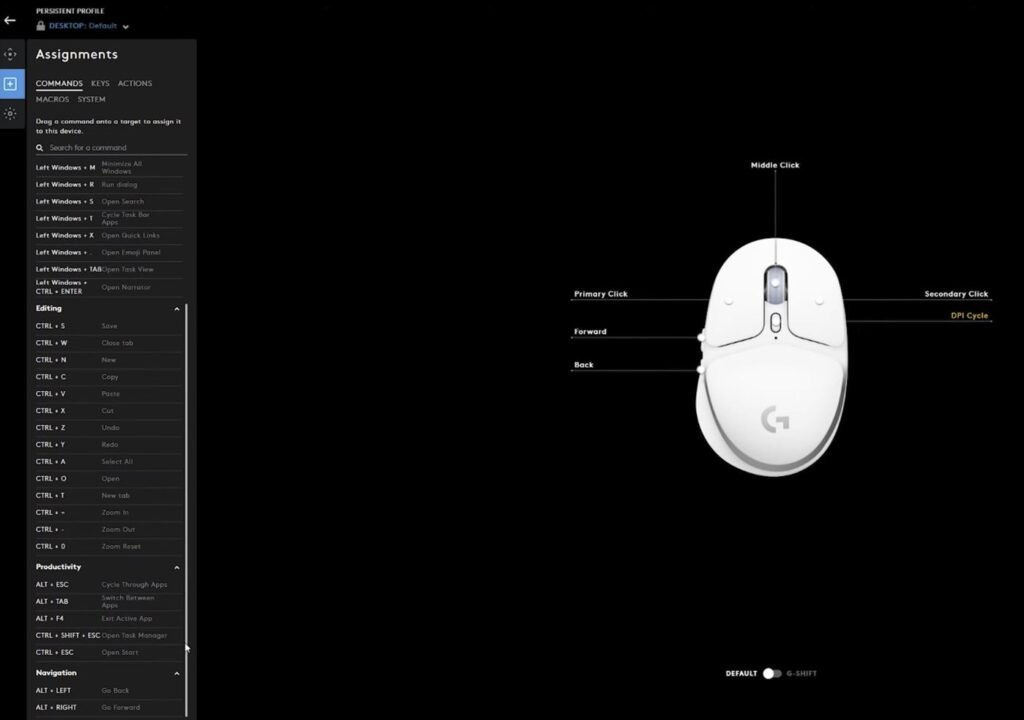 The Logitech tool lets you make different configuration profiles that you can use to change how the buttons work, the way the lights look, or even how sensitive the sensor is. Note that, unlike many other mice of the same brand, you can only set it to one of three levels of sensitivity and not five. We still think that this is mostly enough. The polling rate goes up until it reaches 1000 Hz.

There is also a settings tab where you can change the mouse’s automatic standby mode, update the firmware, or save a profile to the mouse’s internal memory. Keep in mind that you can save several other models of the same brand.

We won’t go into detail about all the options because we’ve already seen and written about them on the many Logitech G mice we’ve used. Everything works great, there are a lot of settings, and the software is always easy to figure out.

When it comes to battery life, the brand claims up to 40 hours with the RGB turned on. The software says that a 37% charged battery will last for 17 hours, which seems to be in line with what we found in our tests. But nothing stands out; a Logitech G Pro X Superlight has a battery life of up to 70 hours.

The Logitech G705, which costs $99.99, will have a hard time getting a foothold in the market right now. Some players will be happy with the model’s overall design and the fact that it has two wireless connections, but it falls short in other ways.

At this price, we expect more today, and we would have liked to see a better optical sensor, a lighter design, or more comprehensive software functionality. In this way, it seems like the G705 has the features of a mid-range wireless mouse but costs as much as a high-end model.

In the end, we would recommend upgrading to a Logitech G Pro X Superlight for a few dollars more or saving money by going with the G305 model to always stick with Logitech. For those who prefer wireless mice with small dimensions, we recommend the Razer Orochi V2, which is now available for less than $48. 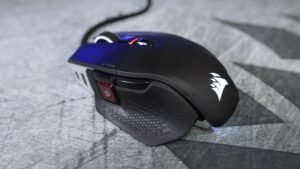 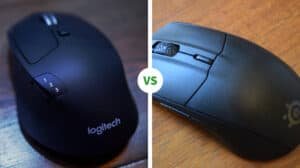 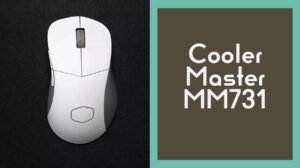 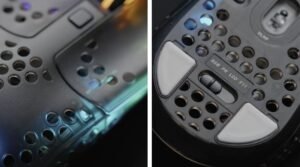 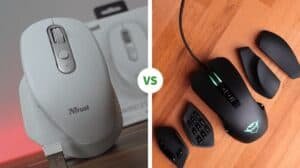