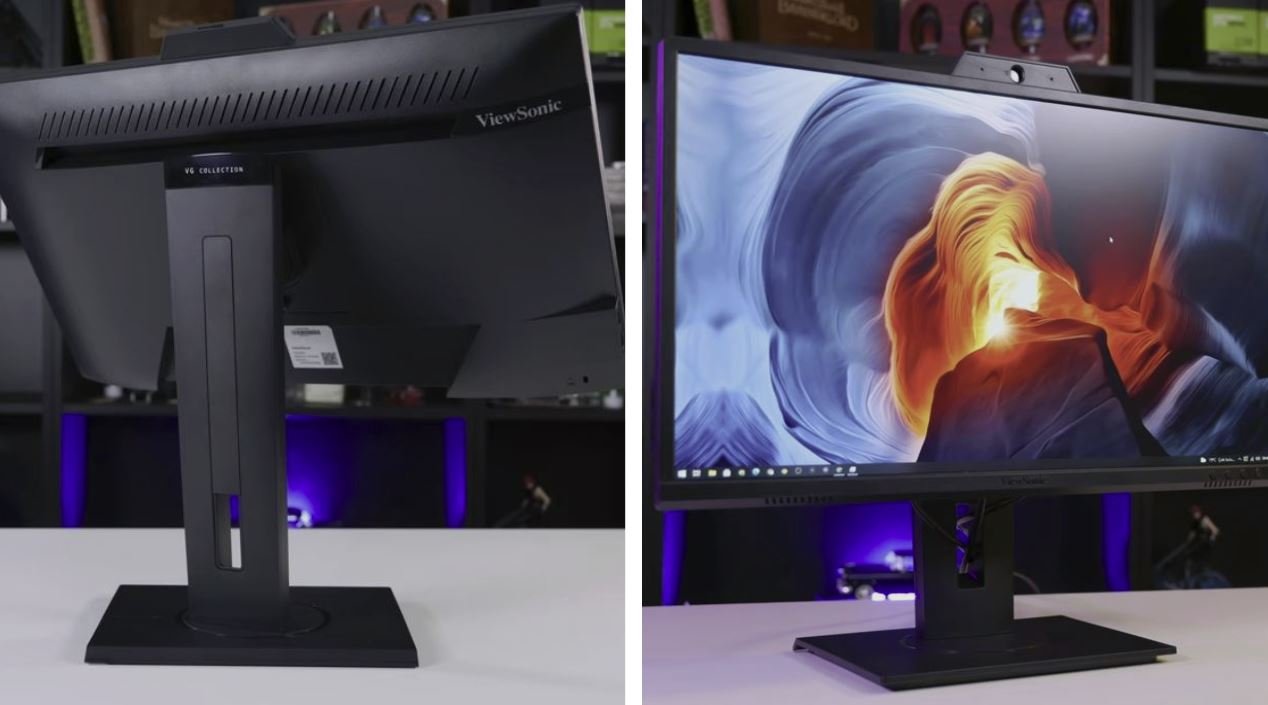 With the ViewSonic VG2440V, you get a well-equipped office monitor that should cut a fine figure with its integrated webcam, especially in video meetings in the home office. The 24-inch uses an IPS display that could hardly be more standard: Full HD sharpness, 60 Hz refresh rate, moderate to solid contrast, and mediocre color precision.

The luminosity is low at 250 cd/m², so screen content is difficult to see in sun-drenched rooms and with backlighting. The three graphics connection standards, VGA, HDMI, and DisplayPort 1.2, are available for connecting PCs, notebooks, etc. Modern USB-C with integrated DisplayPort? none. The stand allows the VG2440V to be adjusted in all imaginable directions.

The unique feature of the monitor is the built-in webcam on the upper frame of the device. This can be tilted a few degrees forward and backward to allow an optimal angle for all users. A cover slider ensures privacy and security when not in use.

Low power consumption and a very flexible stand are also to be offered. With HDMI, DisplayPort, and VGA, modern analog input options are offered. Side USB ports complete the overall package.

With a maximum control of 60 Hz and a specified minimum response time of 5 ms, the device is not designed for gamers. Of course, we are also testing this area to see if casual gamers would be happy with this model. We will also test the color fidelity of the subject, which should cover the sRGB color space 100%.

The ViewSonic VG2440V does not rely on a frameless design, as many current competing products do. This will be due to the existing webcam on the upper frame, which requires a specific contact surface. However, with a frame width of around 1 cm, the device also looks modern.

From the back, however, it is effortless. Visible are ventilation slots in the upper area and a discreet manufacturer logo. The stand was mounted via VESA-100 holes, which are available for an external bracket. 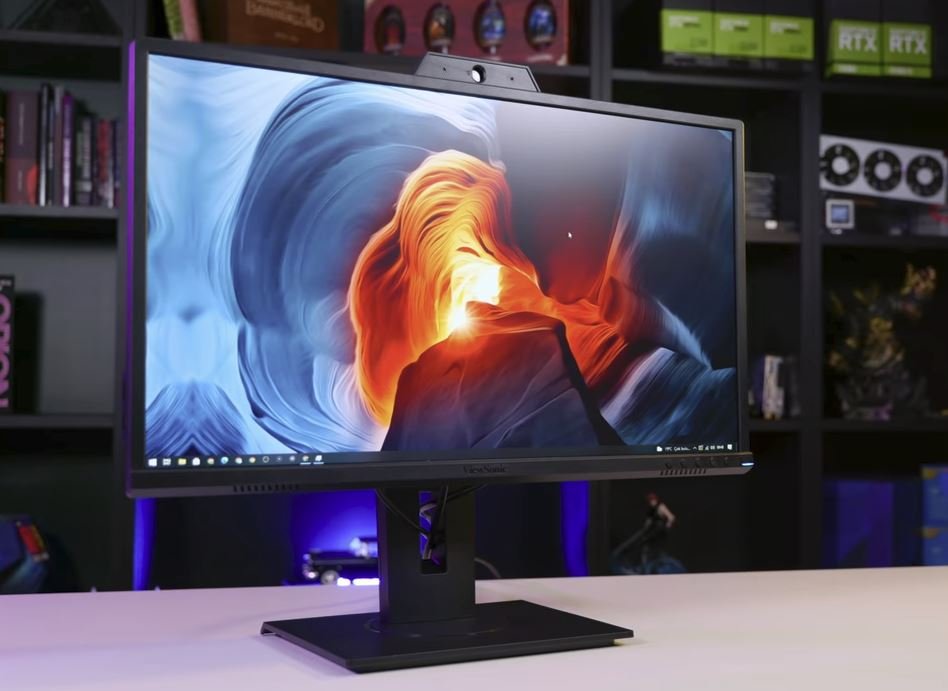 The inclination adjustment is infinitely variable and hits a pleasant range between tight and easily adjustable. There is also an extensive setting range available. To the front, however, this could have been a little bigger – not necessarily for the pure image display, but for the webcam’s position. The tilt can be adjusted by 5 degrees forward and 40 degrees backward. 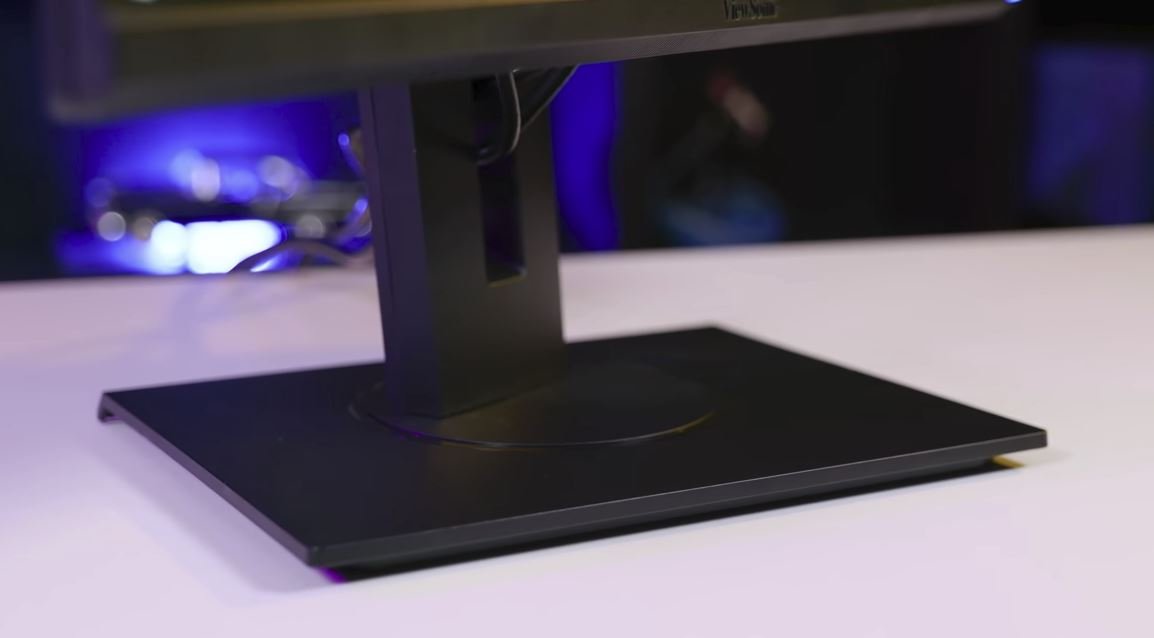 The leg can be screwed to the stand without tools. This combination can be clicked on the back of the screen via quick release. The screen does not have to be removed from the packaging, making damage during installation almost impossible.

The stand is classically rectangular. However, it has a round part in the middle, over which it can be turned. The leg has also been designed very simply and has as an eye-catching a hole for cables and a shiny area in the upper part. But since this part, like the entire monitor, was kept black, the overall impression of the ViewSonic VG2440V remains simple and restrained. We expect precisely these properties from a display to be used in the office or home office. 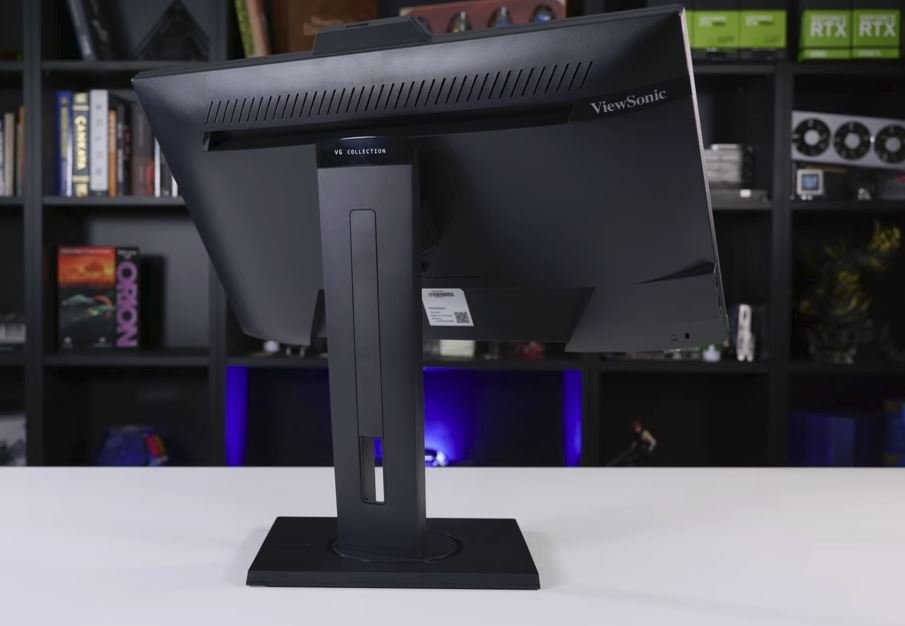 The monitor can be rotated 60 degrees in both directions – also a large adjustment range compared to many competing products. Even when turning, the stand looks very stable, which gives a high-quality impression overall. In addition, only the middle part is rotated, which means that they stand always remain in the same position. 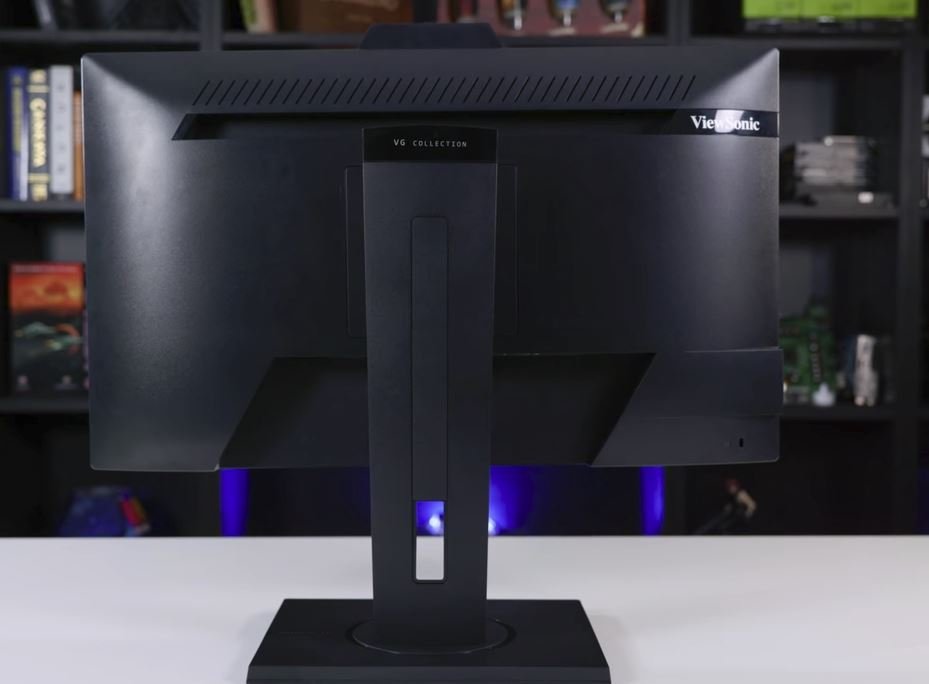 It can also be conveniently rotated into pivot mode. It does not snap into place, which requires a little more time to align the monitor.

The ViewSonic VG2440V has been completely matt. The small inner frame is also matte, which results in only very weak reflections of the screen, which were also not perceived as disturbing. The image display looked pleasant in the factory condition. The adjusted brightness was perceived as too high but not as noticeable as with many competing products. During the reset, the monitor sets the following values used for the subsequent factory reset assessment. 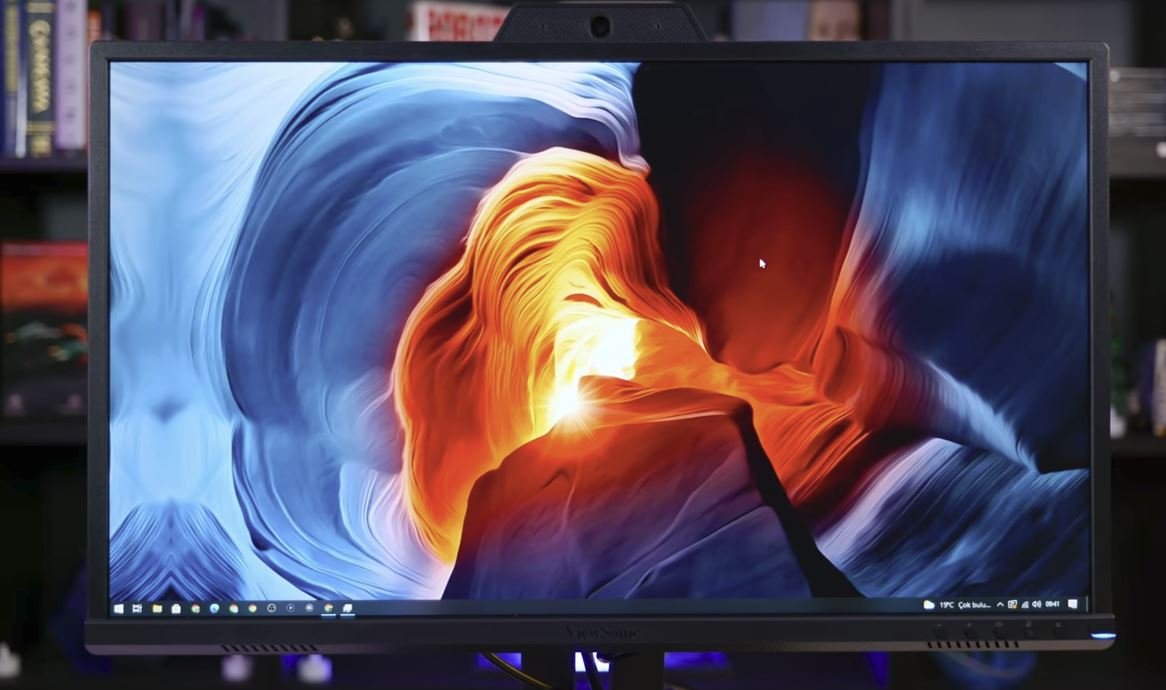 Grayscale: In the following test image, all bright bars could be distinguished from the background in the factory state despite the relatively high brightness. In the case of the dark bars, the result was significantly worse. Only the fourth bar from the left or right could be perceived as a bar, not a uniform background.

Responsiveness: We examined the ViewSonic VG2440V in native resolution on the DisplayPort. The monitor has been reset to factory settings for measurement.

Image build-up time and acceleration behavior: We determine the image build-up time for the black-and-white change and the best gray-to-gray change. In addition, we give the average value for our 15 measuring points.

The measured value CtC (Color to Color) goes beyond the conventional measurements of pure brightness jumps – after all, you usually see a colored image on the screen. Therefore, this measurement measures the most extended period that the monitor needs to switch from one mixed color to the other and stabilize its brightness. The mixed colors, cyan, magenta, and yellow, are used with 50% signal brightness. With the CtC color change, not all three subpixels of a pixel switch the same, but different rise and swing times are combined.

The latency is good with activated mode “Low input delay” and 60 Hz with 5.4 ms (shortest measured value from numerous attempts). Half the average image change time must be added. The “Ultrafast” overdrive level results in a latency time of 9.3 ms. At the more recommended “Advanced” level, it is even 12.5 ms. For casual gamers entirely sufficient; for hardcore gamers already too slow. However, this target group would also miss other things, such as the 144 or 165 Hz operation.

The connectors of the ViewSonic VG2440V are drained downwards, so there should be no restrictions on using an external bracket. 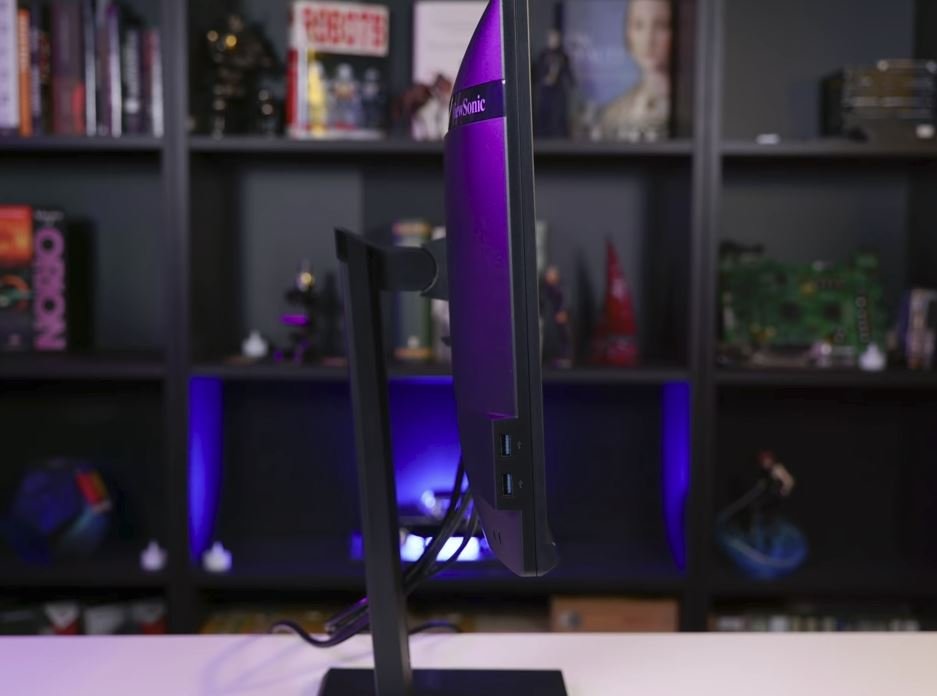 The audio connectors are one input and one output. There, signals can be transmitted via jack cable and output, for example, via headphones. The HDMI interface supports the 1.4 standards, and the DisplayPort is set to version 1.2. 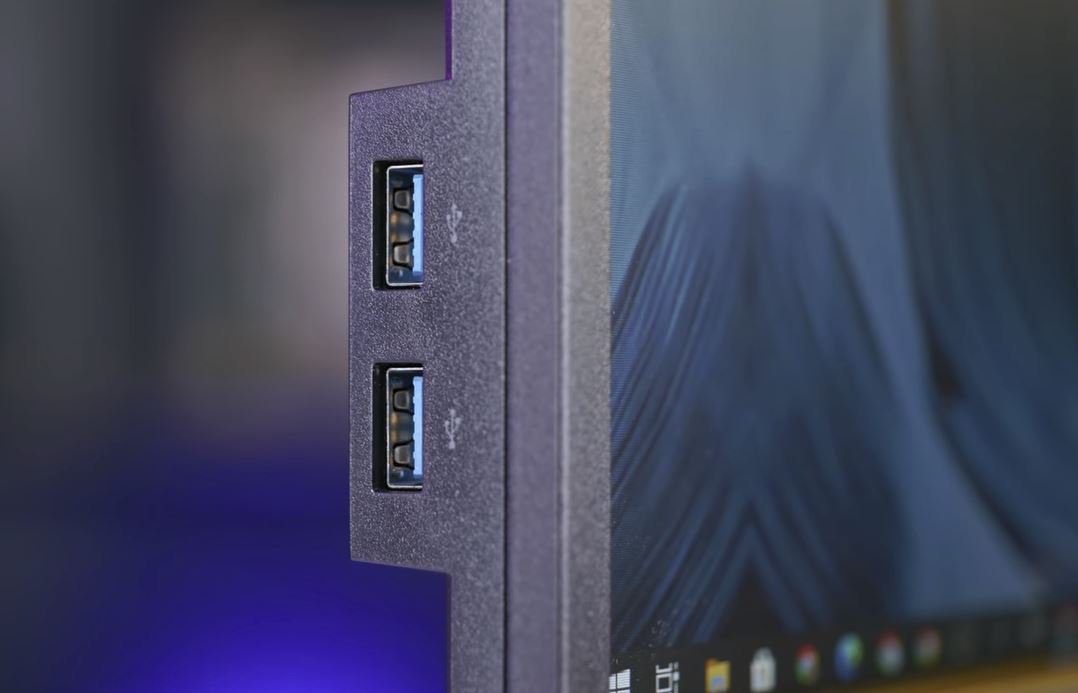 Even if there are already more modern variants for both connections, these are sufficient for the rest of the technology of the monitor and do not lead to any restrictions in operation. A VGA connection is hardly needed in practice, but there are still isolated devices that only have this interface, especially in everyday office life. 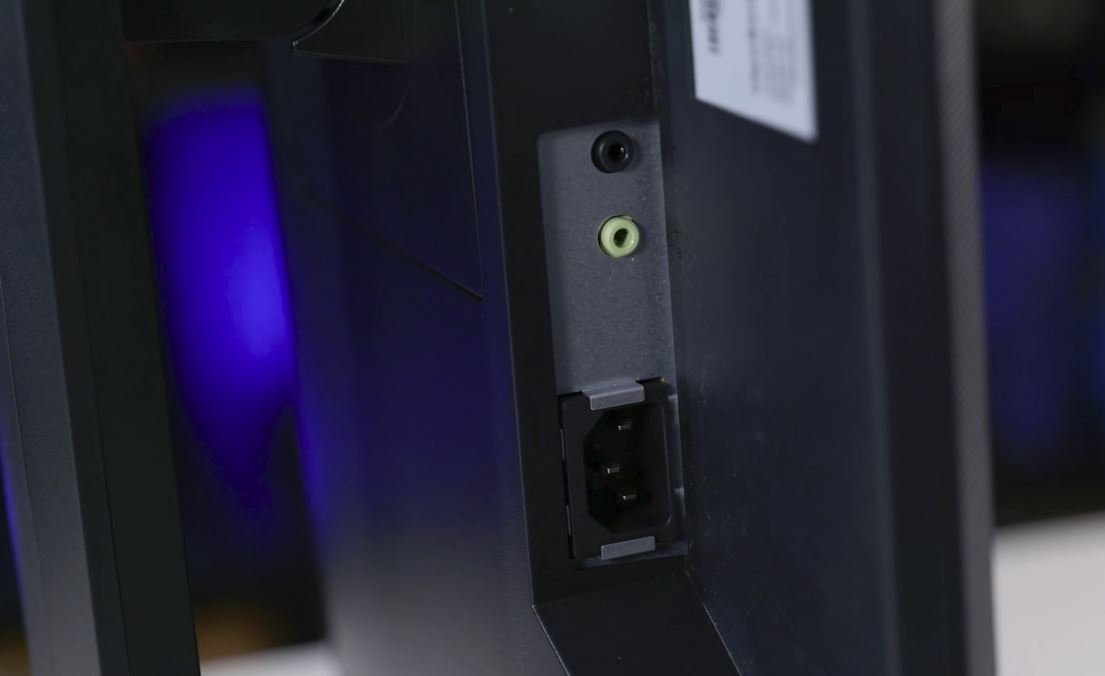 There are two USB 3.0 ports on the left side of the monitor. These are at the height of the outer frame and can therefore be well felt and used in practice. These connections are operated with the same cable that is also necessary for the operation of the webcam. This means that only one USB port on the laptop or PC is used.

On the monitor frame, there are 5 buttons to control the OSD and a much larger button to turn the monitor on and off. The names above the buttons are only interesting for the quick functions, in the actual OSD the software displays the functions of the keys. The names on the monitor frame are also very discreet, so they can hardly be recognized in low light conditions. The button with the microphone symbol also has a small LED. This lights up red when the microphone has been muted. 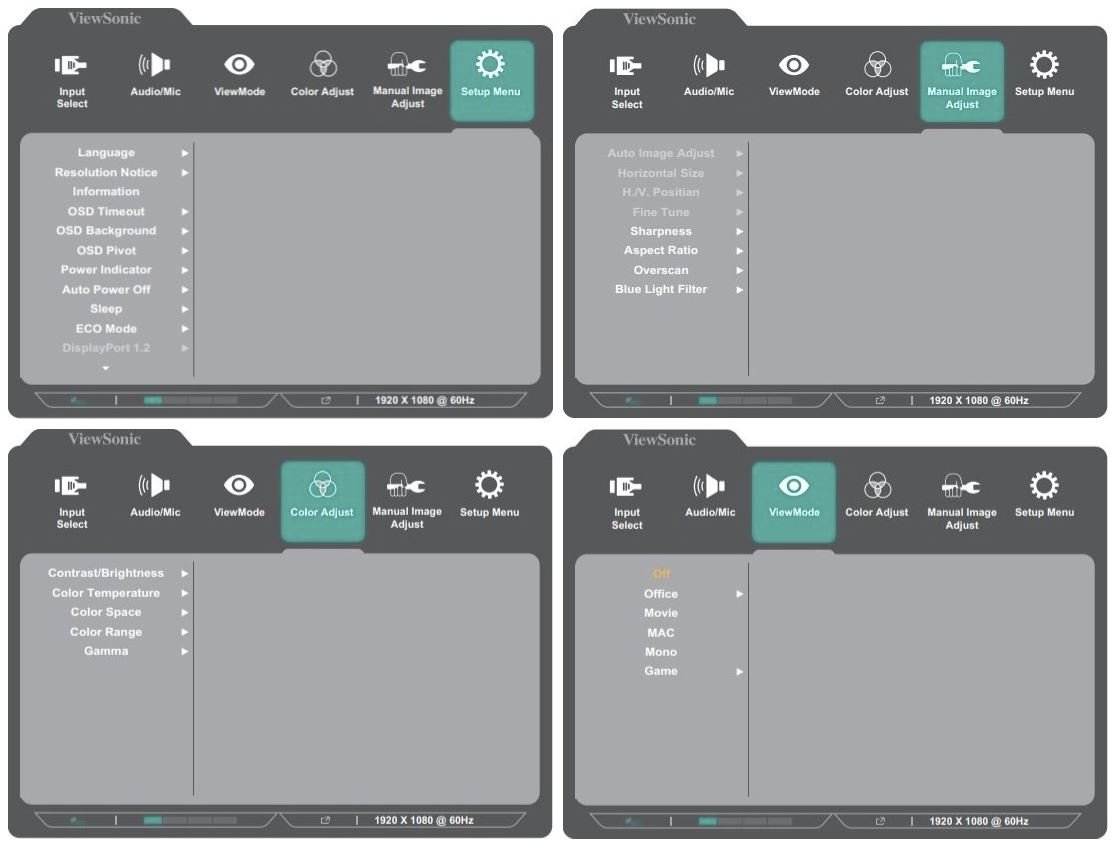 The mechanical buttons have a delightful short pressure point. Each pressure also produces a mechanical noise, which provides direct feedback to the user. Navigation in the OSD was convenient, and each keystroke also resulted in a function. However, it would help if you did not press too fast: More than about two keystrokes per second cannot be processed.

The first four buttons call up quick functions. With these, the sound can be quieter, louder or muted. The last button mutes the microphone. For the monitor, we find these buttons well chosen, as they can be used more often in video conferences.

The fifth button calls the actual OSD, divided into six sections. The first tab offers the selection of signal inputs and the second audio options, which can also be adjusted via the described quick functions.

The third tab contains the image modes and three individually adjustable modes, in which options are offered that are otherwise not found in the OSD. For example, the overdrive function can only be adjusted in an individual mode. We do not find this solved very happily, as we would have liked to have viewed them in standard mode or the game modes and adapted them if necessary.

The fourth section offers color adjustments. In addition to predefined color temperatures, individual settings are possible there. Fortunately, the gamma value can also be set, and for external sources, the selection of the color space and the color range is intended.

The last two sections provide access to some more image adjustment options and general settings. For example, the OSD can also be displayed rotated when the monitor is operated in pivot mode. Overall, a well-thought-out and extensive OSD for the device.

The two front-facing 2-watt speakers are designed to provide clear sound, especially during video conferences. In practice, this also works in principle. The sound reaches the user directly, and the volume is adjustable enough to drown out even ambient noise. Three of the display’s four quick buttons are also reserved for the speakers. The volume can be increased with one button and decreased with the second button. The third button mutes the sound generators. For the monitor, this is a pretty reasonable assignment.

The ViewSonic VG2440V scores in our test in all areas that are interesting for an office or home office monitor. These include the shallow power consumption, the flexible stand, the side USB ports, the good subjective image impression, and the webcam installed on the upper frame. This has no better quality than webcams in modern business laptops, but the position on the main screen and the additional tilt option is a great advantage. We also liked the non-use privacy slider.

The device is also suitable for a game in between, and viewing films and series is also possible without restrictions. On the other hand, Hardcore gamers will lack too many features and options, although response times and latency are in suitable ranges.

We also do not recommend the device for color-critical work, as the sRGB color space is only covered to about 90%, and the brightness distribution in the image homogeneity deviates slightly too much. However, in typical office applications, these values are subjectively not noticeable and do not cause any disadvantages.

The ViewSonic VG2440V can therefore be clearly recommended for use as an office or home office monitor.