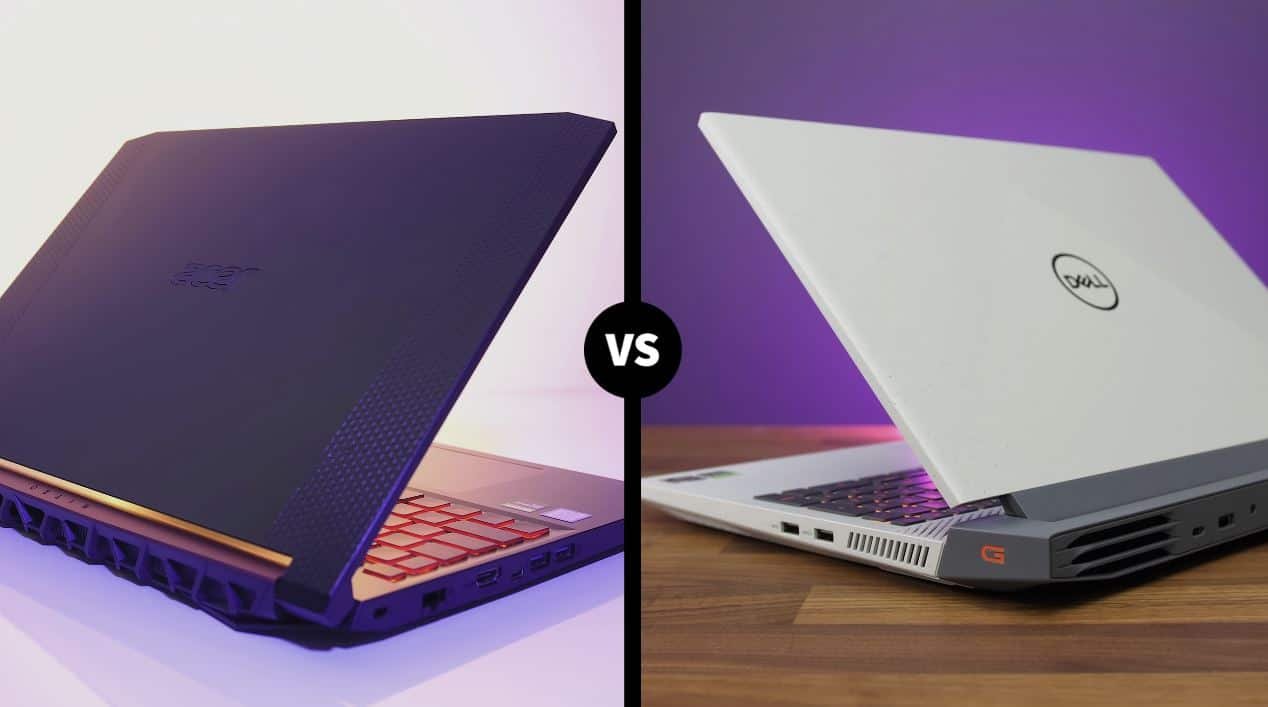 If you want to play on a PC no matter where you are, a gaming laptop is your gadget. Other components, like cooling or the screen, can make a difference, in addition to having ambitious hardware to run your favourite titles with solvency. In our gaming laptop buying guide, you will find information on what to consider when selecting a gaming computer, as well as a meticulous and diverse selection of models starting at thousands of dollars.

Notebooks from Acer and Dell can offer Full HD displays up to 165 Hz and come with next-gen Ryzen-equipped options. Compare the two gaming laptops.

The Acer Aspire Nitro 5 and the Dell G15 are among the most popular gaming notebooks on the market.

Before comparing the data sheets and different versions of both in detail, it is worth noting that Acer is in the process of updating the Nitro 5 in the market. The confirmed new generation of the notebook will have better processor, screen, and video card specifications.

See our detailed review of the Acer Nitro 5

See our detailed review of the Dell G15

The G15 and Nitro 5 heat up a lot because they are packed with high-performance components, necessitating a design that sacrifices mobility to properly dissipate heat. In addition to the bulkier profile, the two laptops bet on the gamer style, with straight lines and more stark contrasts; pulling any of them out of your backpack will not go ignored.

In terms of ports and interfaces, the Nitro 5 is simpler to grasp. Because the chassis does not change, all current generation notebooks include three USB 3.2, USB-C 3.1, and HDMI 2.0 ports, as well as a Gigabit Ethernet connector and a headphone jack. Wi-Fi 6 (802.11ax) and Bluetooth 5.0 are available on wireless networks.

The G15 has a Gigabit Ethernet RJ-45 port, a headset jack, an HDMI 2.0 port, and three USB ports, two of which are USB 2.0 and one of which is USB 3.2. The G15 versions with the GeForce RTX 3050 also offer a USB-C interface and support for DisplayPort in alternative mode. The RTX 3060 ships with three USB 3.2 ports and a USB-C port with Thunderbolt, with all other connectors staying the same.

Regardless of the version chosen by the consumer, both laptops have a 15.6-inch screen with Full HD resolution. The variances are due to refresh rates; whereas all current-generation Nitro 5s have 144 Hz panels, Dell’s G15 has either 120 or 165 Hz displays.

It is worth mentioning once more that the specifications for the Nitro 5 stated here are those of the generation currently being offered by Acer. The latest iteration of the laptop will feature different screen specifications, including QHD (2560 x 1440 pixels) options that can hit the same 165 Hz as the screens found in the more costly G15.

The Acer notebook is also available in Intel or AMD variants. In the case of the Taiwanese manufacturer, the Ryzen versions bet on earlier generation models than those found on the G15: the Ryzen 5 4600H and Ryzen 7 4800H. On the Intel-powered alternative front, the G15 offers essentially the same i5 and i7 options.

Ryzen processors are, in general, the best options in both circumstances. It will be increasingly difficult to pick when both products receive updates for Intel’s 12th generation: current generation cores improve in speed and efficiency to compete more directly with Ryzen, particularly in multicore processing.

Both the G15 and the Nitro 5 come with discrete graphics cards in addition to the processors. In the case of the Nitro 5, the entry-level Nvidia GeForce GTX 1650 is always an option. It has the necessary hardware profile to run contemporary Full HD games, but it lacks support for DLSS and ray-traced graphics, which are significant omissions in component features.

The video cards on the G15 vary greatly. The current model of the laptop has the same GTX 1650 as the Nitro 5, but goes up to the RTX 3050 and RTX 3060 in the more expensive editions, which run Ray Traced and offer the boost of DLSS. However, in violation of Nvidia’s rules, Dell does not publish the power range of the two GPUs, potentially misleading the user at the time of purchase.

There is no difference in RAM between the two computers. In all situations, models with 8 or 16 GB of DDR4 memory are available, with the consumer having the option of installing more memory if needed. The Nitro 5 can have a combined SSD and HD storage option, but low-capacity SSD-only variants (128 or 256 GB) are far more prevalent.

The same logic applies in the case of Dell: the laptop has a detachable SSD, but it appears more commonly on the market in versions with 256 GB. Dell makes no mention of additional slots for installing additional SSDs or HDDs.

Acer, on the other hand, chooses a 57 Wh battery as a universal option among the current Nitro 5 models. According to the manufacturer, the 57 Whr charge is adequate to keep the Nitro 5 running for up to eight hours. Dell, on the other hand, is mum on the subject.

The two notebooks promise more aggressive cooling systems to remove the heat created by the components and sustain consistent performance throughout long gaming sessions in order to appeal to the gamer demographic.

Furthermore, both the Nitro 5 and G15 provide access to special Dell and Acer tools for monitoring and configuring your computer. The Alienware Command Center is available on Dell for, among other things, generating specific operating profiles for each title. In the case of Acer, the consumer can use NitroSense to make the same changes.

Due to the lack of premium options that compete with the MacBook Pro, the entry-level gaming notebook market is quite heated. Gamers and professionals who require a more powerful laptop but do not want to pay the price of Apple’s laptop (or require Windows machines) can find it in gaming laptops.

Offerings such as the Lenovo L340 and Legion 3i and 5i compete with both the G15 and Nitro 5. With a more diverse line of gaming notebooks, many of them are extremely configurable at the time of purchase, allowing for the construction of more powerful options.