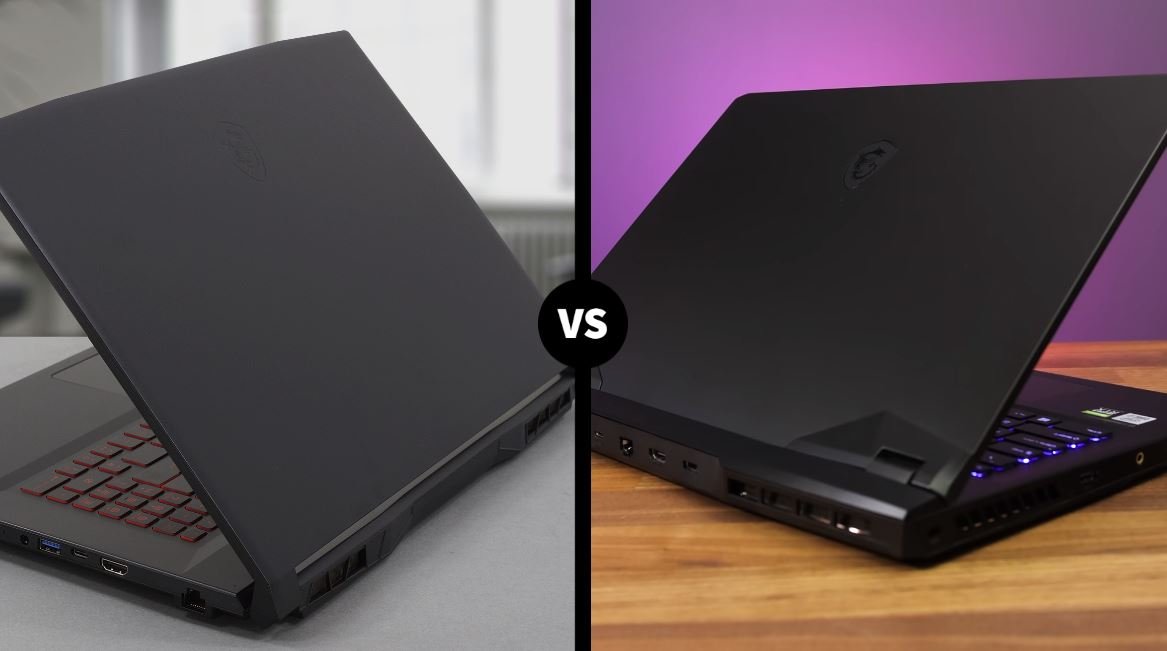 The MSI Katana GF76 12U is a 17.3-inch gaming laptop that was among the first to feature the latest 12th generation Core processors. The processing performance of the CPU has been greatly improved.

The graphics are also equipped with the newly introduced GeForce RTX 3050, which has middle-high class gaming performance, and you can comfortably play many titles with high image quality.

It also features a cool body design inspired by a Japanese sword in collaboration with the famous illustrator Tsuyoshi Nagano.

The MSI GP76 Leopard 10U is an affordable gaming laptop with the high-performance graphics of the GeForce RTX 3070.

Operating at a maximum graphics power (max TGP) of 130W, the RTX 3070 outperforms other gaming notebooks with the same graphics. It also has a 144 Hz high refresh rate LCD and a relatively wide color gamut.

It’s not thin and lightweight, but it’s reasonably priced for an RTX 3070-equipped machine.

The MSI Katana GF76 12U has a body design inspired by a Japanese sword, as the product name says “Katana.” In particular, he seems to be conscious of the strength and beauty of the sword.

The biggest feature of Katana GF76 is that it collaborates with illustrator Tsuyoshi Nagano. Mr. Nagano is known for his package art in historical games of Koei Tecmo Games, such as the “Nobunaga’s Ambition” series and the “Sangokushi” series, and the product name of Katana GF76 is probably an image of that.

It doesn’t have flashy LED lighting, but it has a simple yet cool design that feels the silence and strength of a samurai.

The resolution is 1920 x 1080 pixels, and the maximum refresh rate is 144Hz. In FPS and TPS, it is a big trend to draw as many as one frame and stand in an advantage over others, but with this Katana GF76, it is possible.

The 11th generation Core processor ” Core i7-11800H ” is used as the CPU. The i7-11800H is an 8-core 16-thread type CPU for notebook PCs, and while the rated clock is suppressed to 2.3GHz, Turbo Boost Technology raises the operating clock to a maximum of 4.6GHz. The shared L3 cache also has a built-in 24MB, boasting good specifications for game applications.

The GPU is equipped with GeForce RTX 3050 Laptop GPU, a GPU for NVIDIA notebook PCs. The RTX 3050 Ti for notebook PCs is a GPU that adopts the Ampere architecture like the GeForce RTX 30 series for desktop PCs, has 2560 CUDA Cores that are arithmetic units, and is the second generation “RT” that is in charge of real-time ray tracing. It has 20 Cores and, 80 3rd generation Tensor Cores, AI inference accelerators. Roughly speaking, it’s a GPU for the entry market of the GeForce RTX 30 series.

The graphics memory is GDDR6, and its capacity is 4GB. NVIDIA’s Optimus technology can also reduce power consumption by switching between the graphics function integrated into the CPU and the RTX 3050 for notebook PCs according to the application and processing load.

The main memory is equipped with 16GB (8GB x 2) of DDR4-3200 memory, sufficient for gaming purposes. In addition, an M.2 SSD with a capacity of 512GB has been adopted for storage with PCI Express 3.0 connection. The trial machine was equipped with Kingston Technology products.

The installed wired LAN function is compatible with 1000BASE-T, and the wireless LAN is consistent with the latest Wi-Fi 6. A Wi-Fi 6 compatible router is required, but it is a good impression that you can use a high-speed Internet environment anywhere within the range of wireless LAN.

The feature of GP76 Leopard is that it maximizes the performance of GeForce RTX 3070.

It has a black body and is a little rugged, and it is housing like a gaming PC. The top plate is decorated with the MSI dragon emblem, but it’s black, so it’s not noticeable. In addition, it has a matte texture and is smooth.

It is a hinge part. The angle adjustment of the display stops at the point you want. It is an image when it is closed. The thickness is 23.4 mm, which is not thin.

The CPU is equipped with a high-performance Core i7-10870H, which is high-performance. Also, the multi-core and single-core scores did not differ that much between the two modes.

GP76 Leopard 10U is equipped with two 8GB memory of DDR4-3200. In addition, if it is a personal computer SHOP arc, it is possible to install up to 64GB.

The storage is equipped with a 1TB NVMe SSD by default. Sufficient speed and ample capacity. In addition, if it is a personal computer SHOP arc, it is possible to change to 2TB SSD, etc., or add another SSD.

So what about the specifications of this product? Looking at the graphics information from the NVIDIA control panel, the boost clock is 1620 MHz, and the maximum graphics power is 130 W, which is a high number.

It draws images more than twice the normal 60Hz, so even with quick movements and viewpoint movements, smooth and slimy movements, precise aim movements can be performed quickly, and the timing at which enemies can be found is slightly earlier. Especially in highly competitive e-sports titles, it has over 60Hz LCDs.

The battery capacity is 65Wh according to the manufacturer’s published value, which is normal to a slightly larger capacity for a gaming notebook PC.

Equipped with the Core i7-12700H announced in January 2022, both multi-core and single-core had the highest score among the notebook PC processors measured so far.

As for graphics, it is equipped with GeForce RTX 3050, announced in January 2020, and it seems that many titles can be played comfortably with high image quality, including heavy games.

As for the part that is a little problematic is equipped with a 144Hz drive liquid crystal, which is as large as 17.3 type, but there was a little afterimage. In games that move violently, such as FPS, you may feel flickering on the screen due to afterimages. Also, the narrow color gamut makes it unsuitable for creative work.

MSI GP76 Leopard- It was equipped with a GeForce RTX 3070 with a high setting of the maximum graphics power of 130W, and it had very high performance. Heavy games such as “Cyberpunk 2077” also work comfortably at an average of 60 fps or higher.

Furthermore, it is equipped with a high refresh rate LCD of 144 Hz, and the RTX 3070 with a high setting enables operation at 144 fps or higher at all times. It has high cooling performance and can withstand long hours of gaming.

The display’s color gamut is wide (sRGB coverage rate 96.1% as measured by this site), so you can enjoy the game with beautiful images. It can also be used for image editing and video editing for web posting.

However, it is not suitable for carrying because it is heavier and thicker than the GS66 Stealth.