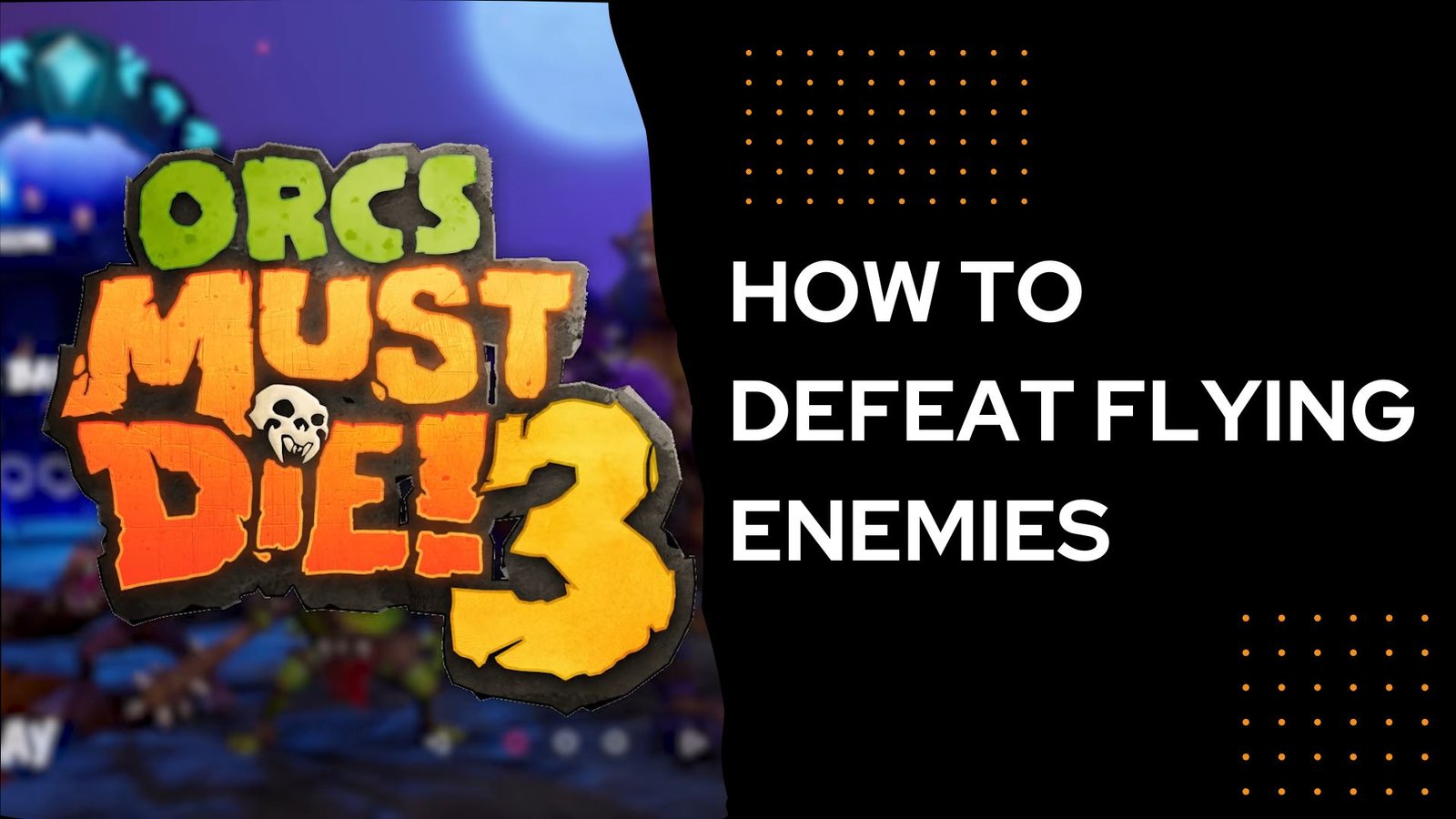 Orcs Must Die! 3 is a new part in a colorful shooter with a third-person perspective, as well as elements of strategy and tower defense. The novelty’s plot is standard: hordes of repulsive orcs have formed massive armies and are marching towards the magical city. The combat mage and sorceress must quickly place the combat vehicles on the city walls, then pick up cold weapons and eliminate all orcs.

Simple and complex cooperative gameplay on two players at the same time – the fortification defenders cannot be allowed to destroy the city walls, but this is extremely difficult to achieve. Set and repair traps, move artillery around positions, recruit units, and collect coins to buy upgrades before each wave. Better yet, personally participate in the battle by flattening, incinerating, and cutting the orcs into small pieces.

How To Defeat Flying Enemies

Flying creatures become one of the most annoying and difficult to destroy in the third installment, as they can easily avoid the main character’s traps and skillfully evade his shots. We decided to gather all of the necessary information to ensure that the monsters floating in the air do not reach the portal during your shift.

To begin, we should mention that in order to defeat flying enemies, you will need to use specific traps and weapons. Because all levels in Orcs Must Die 3 and the situations on them are constantly changing, you will need to learn how to interact with weapons that are effective against flyers and how to set traps correctly. However, it will take some time, and you will soon become a tornado of flying monsters in the game. 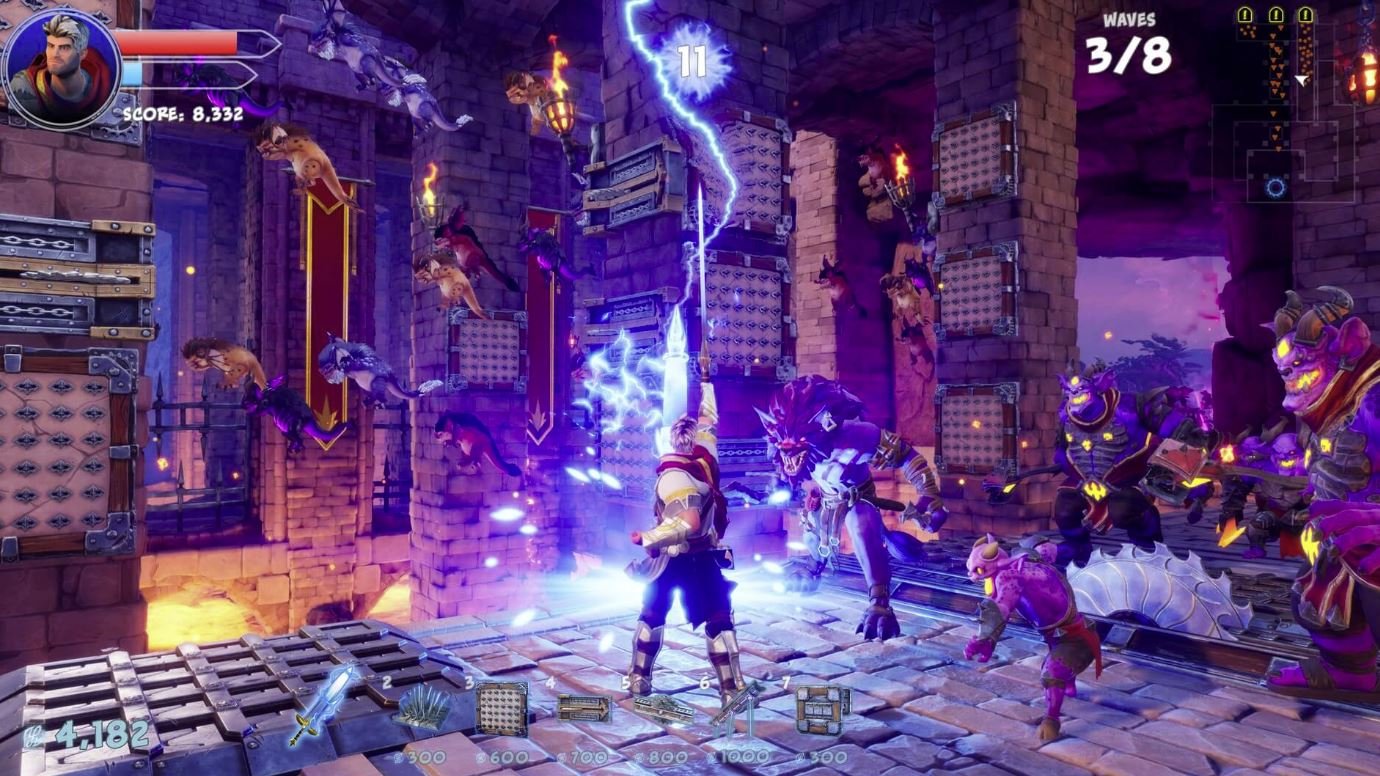 Orcs Must Die 3 currently has up to 7 different types of flying enemies. The primary distinction between them is the type of damage. Each brings a unique threat to the playing field. To begin, each has a distinct elemental type of damage: toxic (Bilebat), fire (Hellbat/Hellbaby), void (Voidbat), frost (Frostbat), and shock (Shockbat) (Shockbat).

In terms of general advice, close-range traps cause negligible damage to flyers. That is, in battles with them, you must always use long-range weapons; otherwise, you will lose.

The Most Effective Traps

It would appear that by reading the description of each available trap in the game, you can determine which type of enemy it is most effective against, but this is not always the case. In fact, in Orcs Must Die 3, there are structures that only attack flyers and those that have a mixed type of attack, meaning they attack both flying and ground monsters. To avoid wasting time looking for the most effective traps, simply use the ones listed below to combat the air creatures.

First and foremost, I’d like to mention the trap that came with the first installment of the franchise, namely the Archer Guardian. This is one of the best tools in the fight against flying enemies in Orcs Must Die 3. The Archer Guardian attacks in a 16-cell range, and the monster only needs to enter this area to grab a portion of the deadly arrows.

Once upgraded, the Guardian Archer will begin dealing more fire damage to enemies. For starters, such attacks deal more damage, and they also set creatures on fire, causing them to slowly burn in the air. It’s also worth noting that the Guardian Archer does not vanish when his health reaches zero in Orcs Must Die 3. He remains in place until he regains his health, at which point he attacks everyone in his path.

One of the best options against flying opponents is the Rapid Fire Ballista. She also attacks ground monsters, but her air attacks are much more effective. Rapid Fire Ballista deals 80 damage per volley. This weapon’s attacks can also hit multiple monsters at the same time. It should be noted that this is one of the few hand traps in Orcs Must Die 3. That is, you must learn how to shoot from it, and the better you are at it, the fewer monsters will enter the portal. 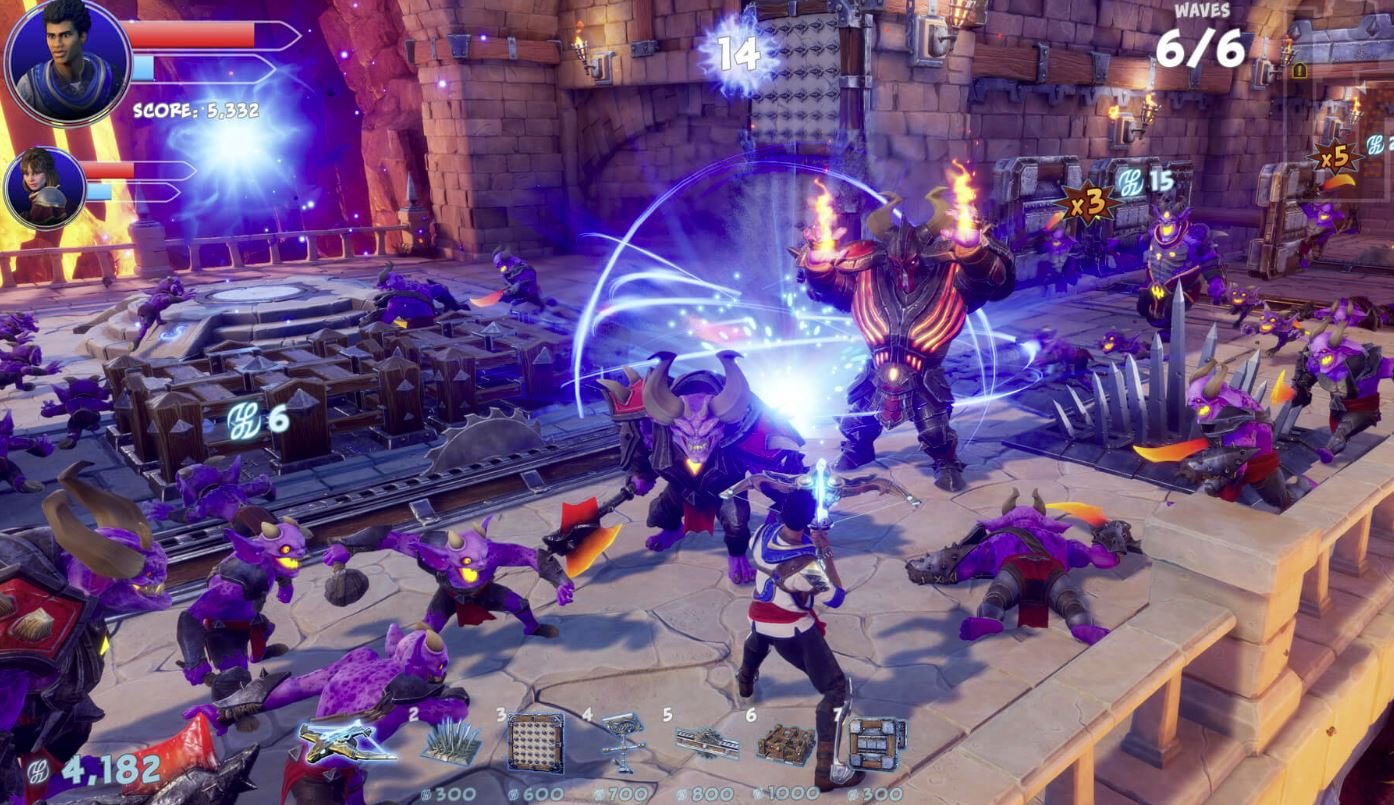 When you upgrade the Rapid Fire Ballista, it will restart and cause enemies to bleed. The effect lasts three seconds and deals an extra eight damage. Furthermore, the enhanced version of the weapon gains a small chance to stun the creature for 3 seconds. The only disadvantage of the Rapid Fire Ballista is that it reloads slowly. As a result, some enemies (Kobold Runner and Hellbaby) can easily sneak past her at this time. If you stick to this plan, you will have no trouble dealing with the flyers.

Perhaps one of the necessary traps for dealing with flying opponents. The Snow Cannon not only damages them, but also freezes them, causing the flyers to turn into ice cubes and fall to the ground. As you might expect, after such a bright descent, all of your other mechanisms begin to attack them, because the flying enemy becomes ground instantly.

Naturally, the Snow Cannon is ineffective against frost-damaging enemies like Frostbat, but there is a workaround. When upgraded, this cannon begins shooting poison and solves all of your problems with cold-resistant enemies. In fact, you should place a number of snow cannons on the level and upgrade half or a third of them. As a result, this small part will kill flyers that are immune to frost damage, while the rest of the traps will easily stop the remaining monsters.

If you’re having trouble mastering the Speed Ballista, or if you’re killing far fewer enemies than you’d like, switch to the Automatic Ballista. Ballista since it automatically shoots enemies within a 16-square radius (can be upgraded with 5 Skulls).

The Automatic Ballista’s main disadvantage is that it attacks the first enemy it encounters within a range of 16 square radius. That is, it can be a ground monster that ignores all other enemies until it is killed by the Auto Ballista. As a result, you should only place such traps in areas where you know the flyers will go. Otherwise, Automatic ballista can become ineffective or even cause ongoing problems.

Best Weapons To Use Flying Monsters

Traps, while useful, do not guarantee that one of the flyers will not be able to break through further. This is usually what happens, so you should always have a long-range weapon on hand. It is the only way to quickly eliminate the flyers and keep them from reaching the portal. The following are the best ranged weapons to use against flying opponents.

First, I think you should look more closely at the Magic Longbow. The fact that this weapon has the fastest reload time in the game makes up for the fact that it doesn’t do the most damage. When a bunch of monsters get past your traps for some reason, the Magic Longbow is the best way to get rid of them quickly.

This weapon has an extra mode, called a salvo attack, that is different from the normal attack. When you use it, the character shoots 8 arrows at the same time at enemies. If you pump the Magic Longbow, all of these arrows will also start to cause bleeding for 3 seconds. This will make it much easier to kill flying monsters and will speed things up a lot. 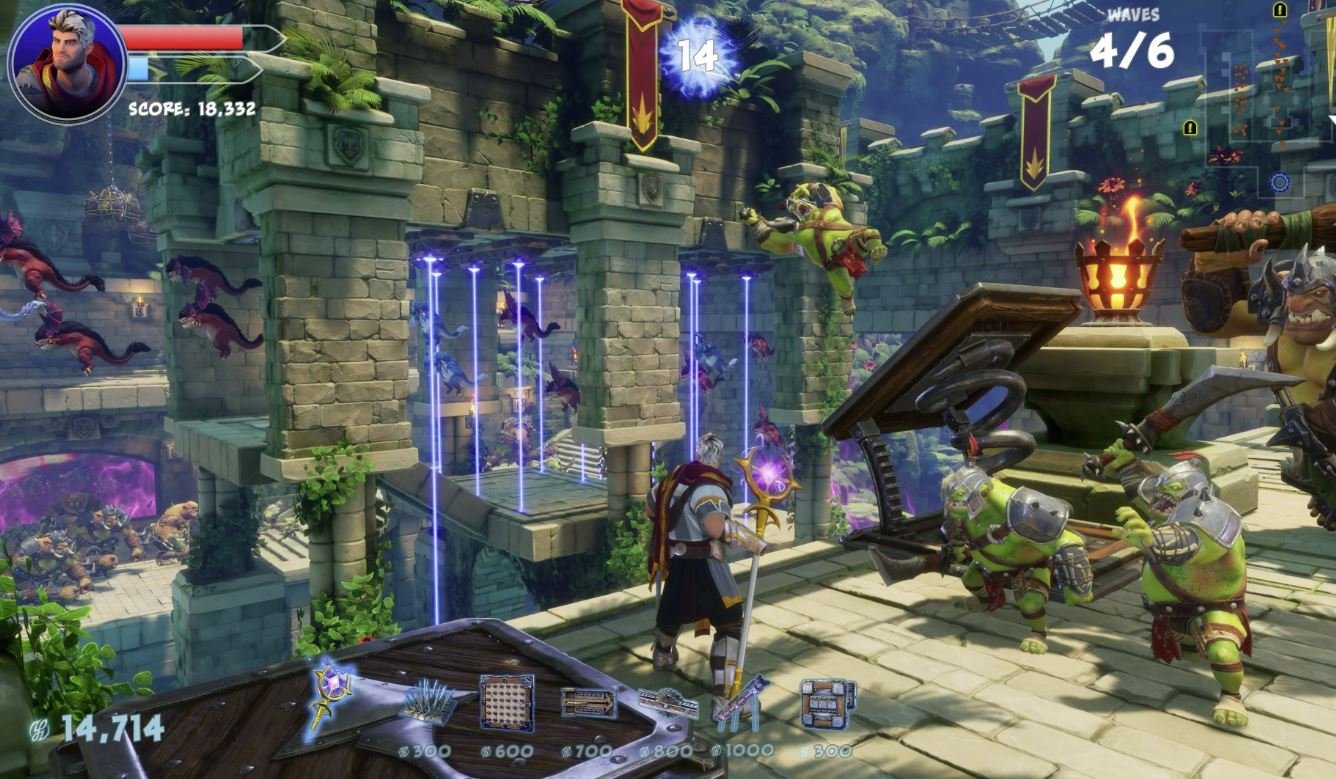 You should use this weapon if you chose a character with a lot of mana and keep an eye on its mana indicators as you play. The Staff of Chain Lightning can kill up to five monsters with a single volley. Also, there is a small chance that lightning will fall to the ground and hit opponents on the ground, who will then run under the ones in the air.

Well, the good old Crossbow is the “cherry on top” of the most useful weapons for flyers. In the first Orcs Must Die, he is the one who makes it easy for the main character to send monsters to the next world. In the third part, when the crossbow hits the head, it does a lot of damage. Headshots work best with this gun, so everyone should learn how to use it well if they want to win more and move through levels faster.

Also, it’s important to know that the Crossbow has an extra skill that stuns multiple enemies at once. Because of this, the Guardian Archer and Automatic Ballista can easily hit them. Even though there are other types of weapons that work well against flying enemies in Orcs Must Die 3, the Crossbow is and always will be the best. Use it every time you see something else in the air, and you won’t go wrong.

If you use the above traps and weapons, you won’t have any trouble with flying enemies in Orcs Must Die 3. You only need to practice a little bit with the weapons we tell you to use and figure out on your own where different types of traps work best. So, you’ll learn good ways to deal with flyers, which will help you get through the game without any problems and become a real master of bloodthirsty monsters.