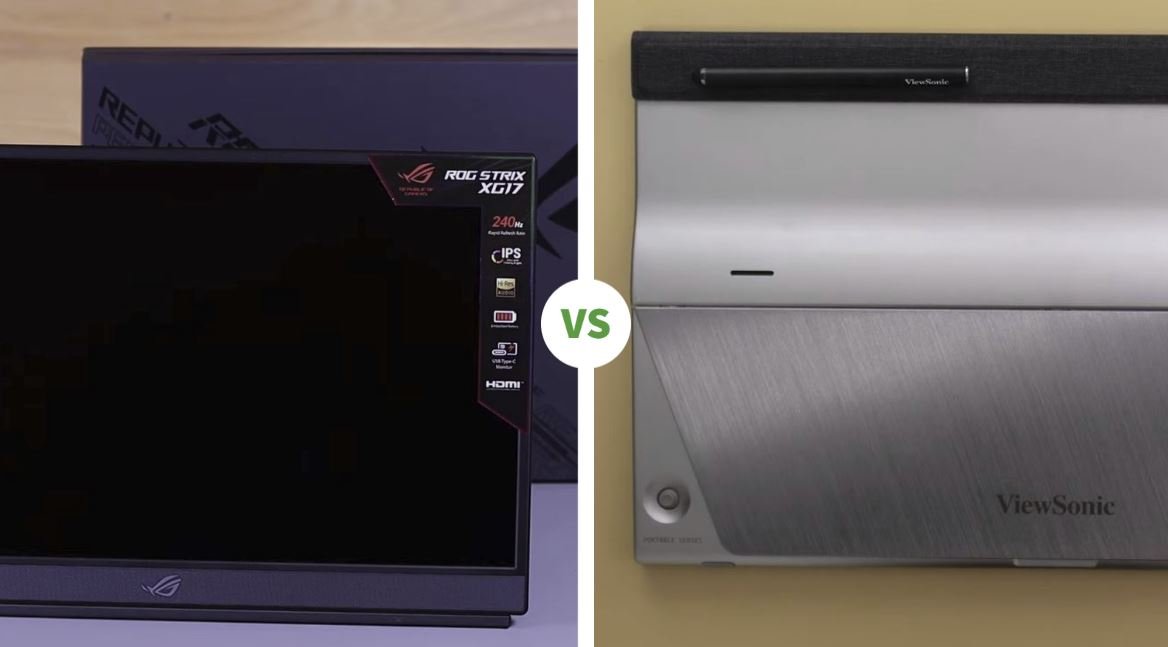 There are currently new challenges for many people. Work, school, and childcare often have to be brought under one roof. Who does not know the following scenario: The youngsters should do tasks at home given by the teacher. At the same time, you want to work undisturbed in your home office. If both happen at the same table, that can be problematic. Because of the distraction, one or the other will feel disturbed by cell phone rings or web conferences. So the work is done in different rooms.

But this then requires several notebooks or monitors so that everyone can do their job properly. Or you visit a customer to present a new product. The PowerPoint presentation appears much more professional on a stylish high-resolution display than on a smartphone or tablet. If you recognize yourself here, you should take a look at this comparision of Asus ROG Strix XG17AHPE vs ViewSonic TD1655.

Fast and portable: the Asus ROG Strix XG17AHPE is an unusual FHD gaming monitor (1080p), which, with its 17-inch screen and 240 Hertz frame rate, is primarily predestined for mobile gaming fun.

The ViewSonic TD1655 is a mobile 16-inch touch monitor that ViewSonic created especially for the workflow in different locations. Its strengths: The flexible use and modern USB-C connectivity. This is particularly advantageous when working in the office, at home, or on the go via smartphone or tablet.

If you don’t want to do without high-end gaming on vacation or the go, you should take a closer look at the Asus ROG Strix XG17AHPE. The 17-inch device with an IPS panel and full HD resolution (1920 x 1080 pixels) creates frame rates of up to 240 Hertz, synchronizes with the graphics card via Adaptive Sync, and weighs only around 1000 grams, and comes with a housing that is just one centimeter deep. 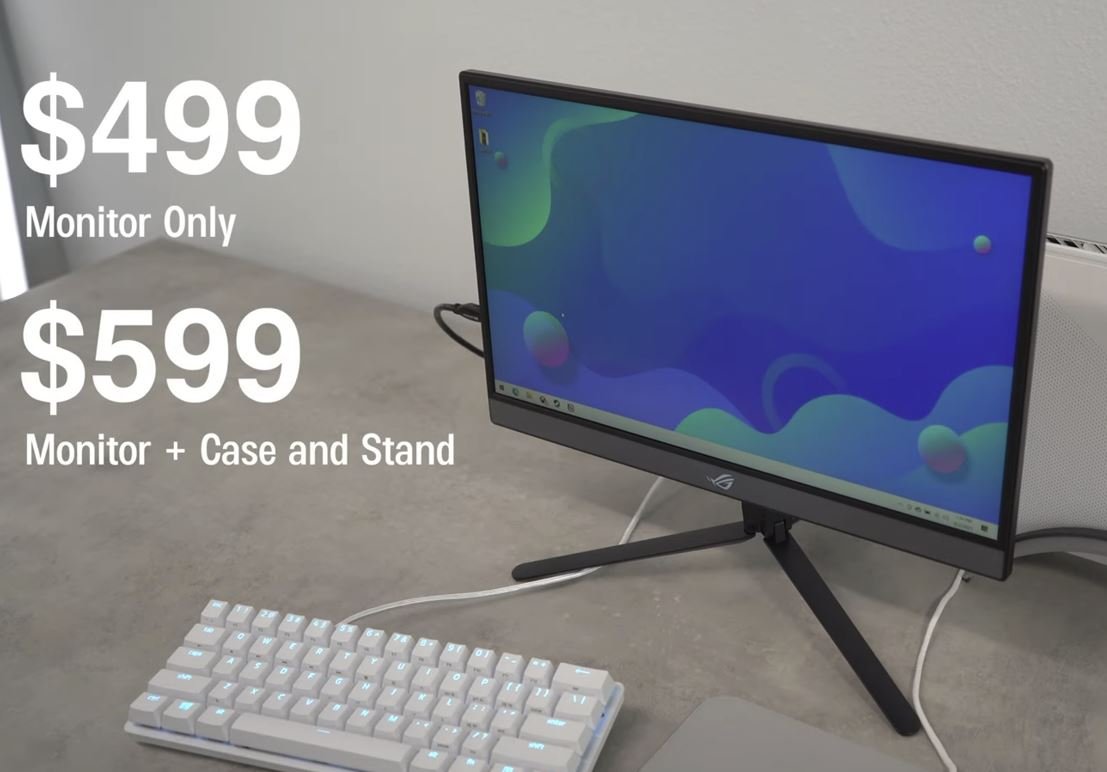 The ViewSonic TD1655 is a portable 16 inches full HD touch monitor perfect for mobile work. Thanks to it, smartphone, tablet, or laptop content can be displayed in a larger area while on the move.

Instead, a wide stance is embedded on the back of the screen, which is simply unfolded. The desired viewing angle is literally set in the blink of an eye. Now you have to connect your laptop, mobile phone, or tablet, and you’re ready to go. 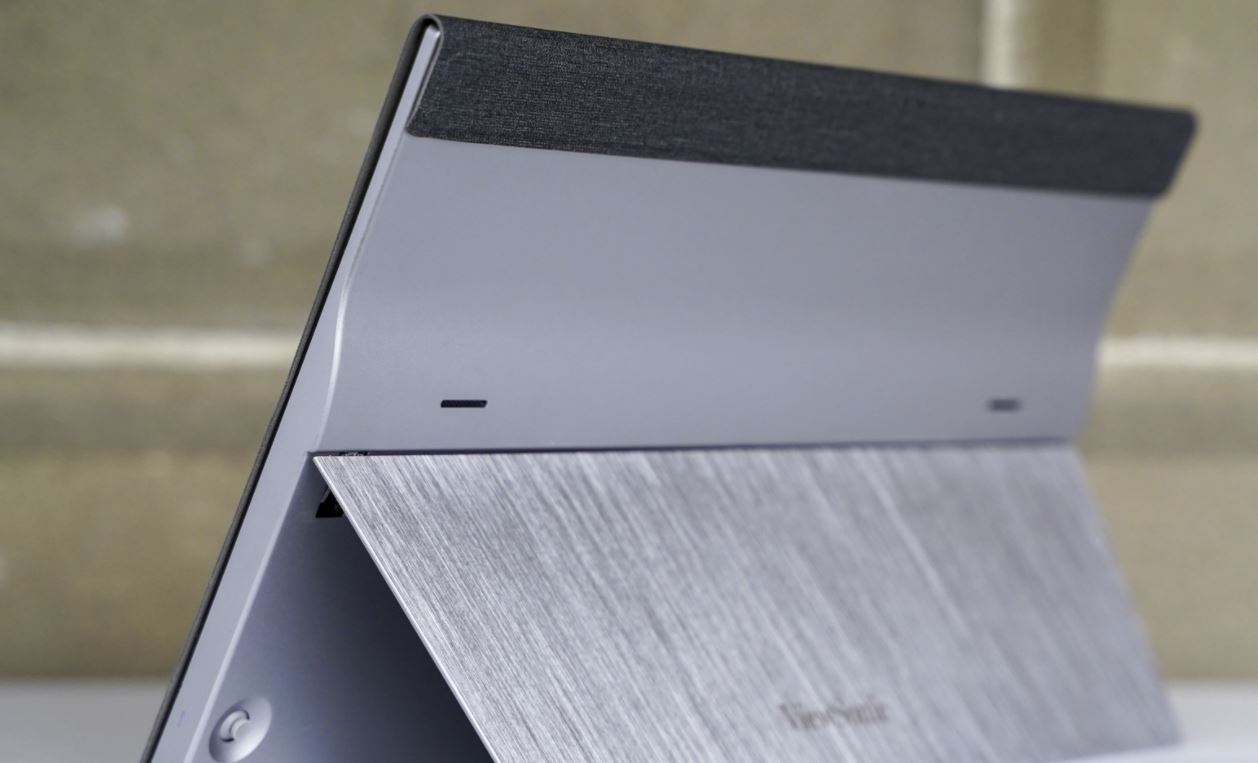 The IPS panel of the Asus ROG Strix XG17AHPE delivers an excellent picture quality. The color representation looks rich and natural, as the gaming monitor covers 100 percent of the sRGB color space that is important for gaming. In addition, the brightness distribution over the entire screen is very homogeneous, and the display is sharp. Only the brightness could be higher; it is a maximum of around 200 cd / m2.

With medium brightness, the battery power is enough for the 3.5 hours specified for mains-independent operation in the test, even with a maximum frame rate of 240 Hertz. However, since the brightness of the Asus ROG Strix XG17AHPE is not exceptionally high, a higher level is usually helpful for casual gaming, and the network-independent usage time decreases accordingly. The screen menu of the Asus ROG Strix XG17AHPE corresponds to that of the stationary gaming monitors from Asus. Accordingly, the OSB offers many performance features tailored to gaming. It is conveniently controlled using four buttons, which, like the interfaces, are located on the narrow left side of the housing. 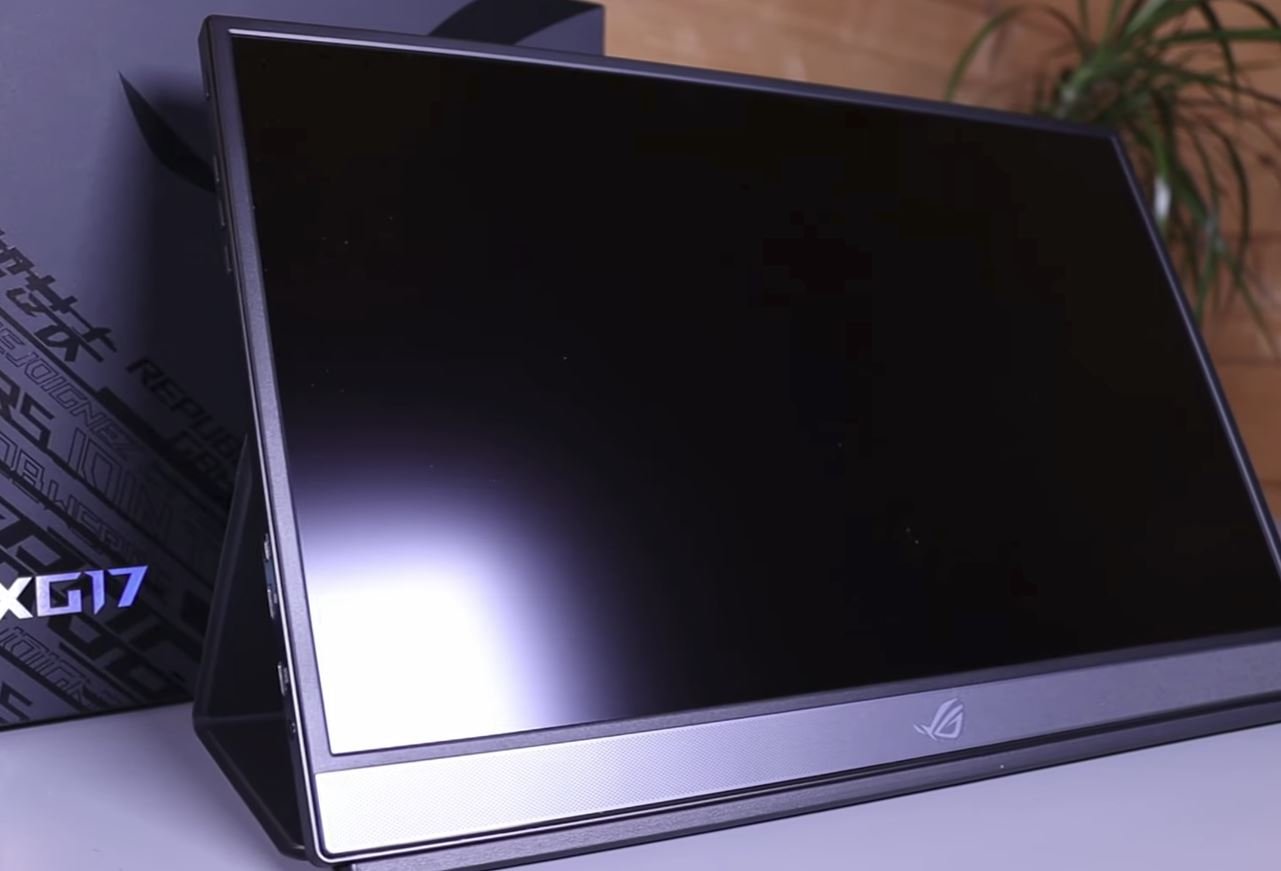 The ViewSonic TD1655 first has to assert itself in the measurement laboratory. The grayscale gradient looks excellent in factory settings. If drawn with a ruler, red, green, and blue run across all brightness levels. In addition, the gamma hits its target of 2.2 perfectly. This ensures that everything can be seen in photos, product images, and presentations in light and dark areas – in precise colors.

The sRGB color space is not covered 100 percent. All primary and secondary colors limit something. However, this is not a significant drawback for typical office and school applications, as print templates are created here. With 232 candelas, the display is also bright enough to see everything well, even in daylight.

ViewSonic has already calibrated the TD1655 so well at the factory that it is impossible to improve the parameters. The color temperature exactly meets its specification with 6,500 Kelvin. Just turn on the monitor and get started. Nothing more is necessary to obtain natural color reproduction. 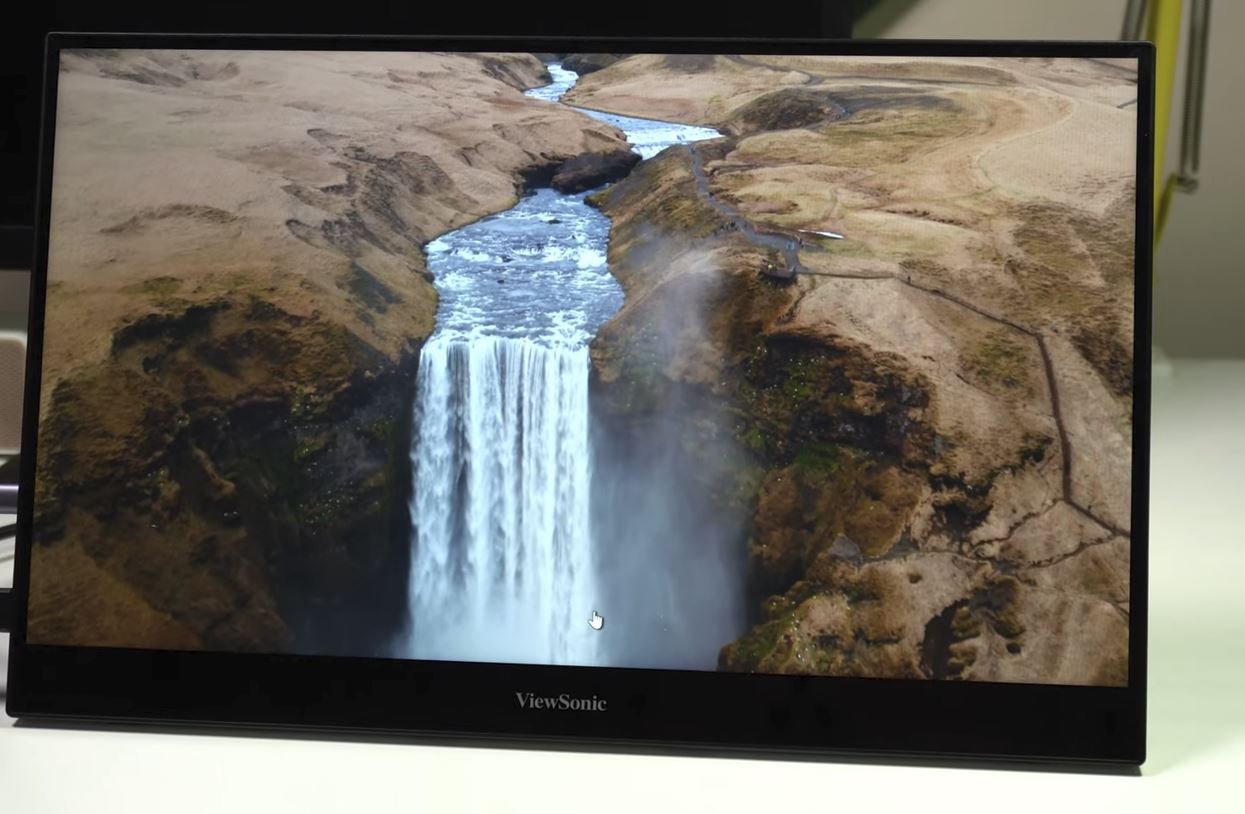 One of the USB-C interfaces supports Power Delivery and Quick Charge 3.0 technology, with which you can charge the battery of the Asus ROG Strix XG17AHPE in just one hour for up to 120 minutes of network-independent gaming. Loudspeakers are integrated into the narrow housing, which delivers clear highs, but they do not offer any real bass foundation because of the lack of volume.

It is better to use the integrated headphone jack with a good earphone. Fortunately, the scope of delivery is complete: In addition to the set-up options, it includes a USB-C cable plus USB-A adapter and a micro-HDMI cable, and a sturdy carrying case. 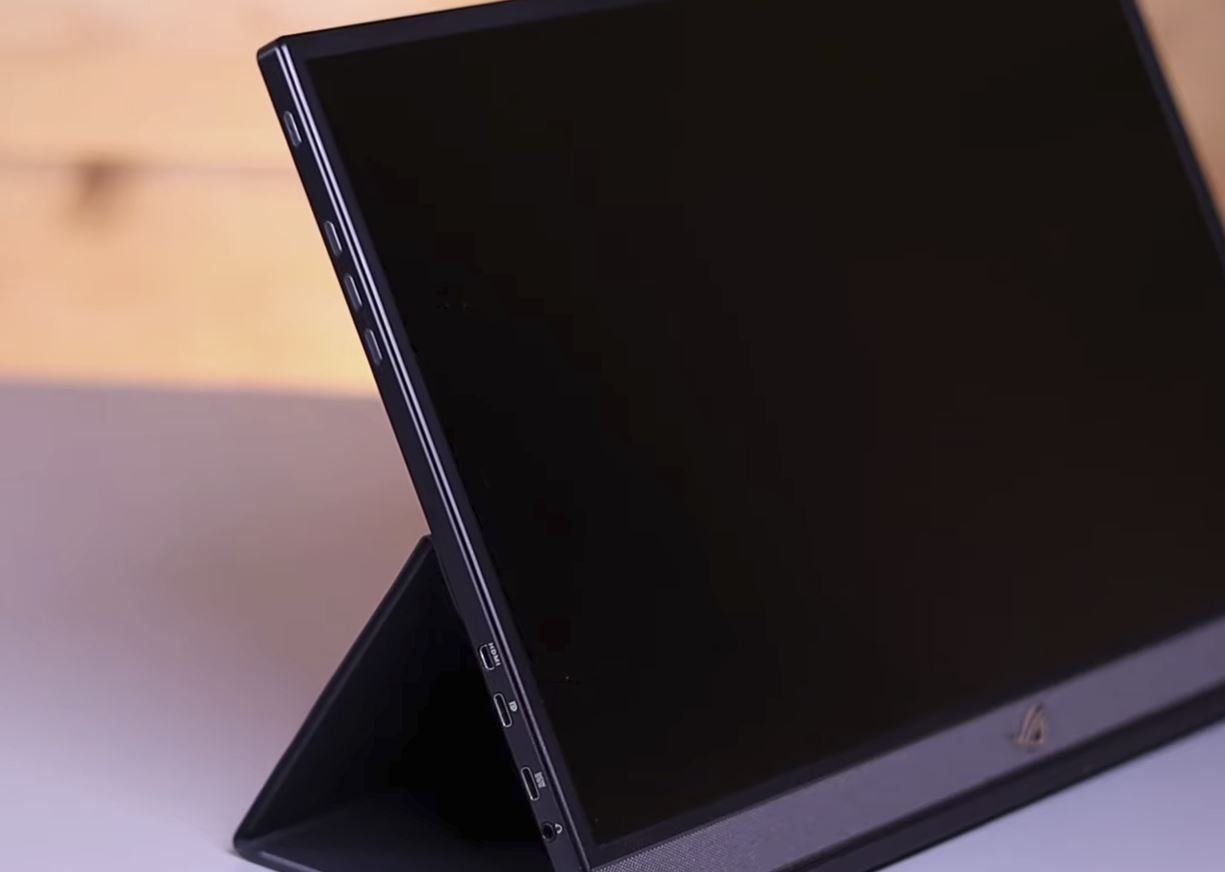 The two universal USB type C connections serve as a one-cable solution. For the transmission of image, sound, power, and control signals, it is sufficient to connect a notebook, smartphone, or tablet via this path. Now the youngsters can, for example, solve math problems via smartphone – on the 16-inch monitor. At the same time, the mobile phone is supplied with power via the TD1655.

The ViewSonic also offers the option of operating it independently of the mains with the support of an optional power bank. Alternatively, the power that the TD1655 receives from the smartphone via USB-C is also sufficient. That is enough for a customer presentation. If you still have an older player without a USB-C interface, he can connect it to the TD1655 via HDMI. The ViewSonic offers a mini HDMI port for this. 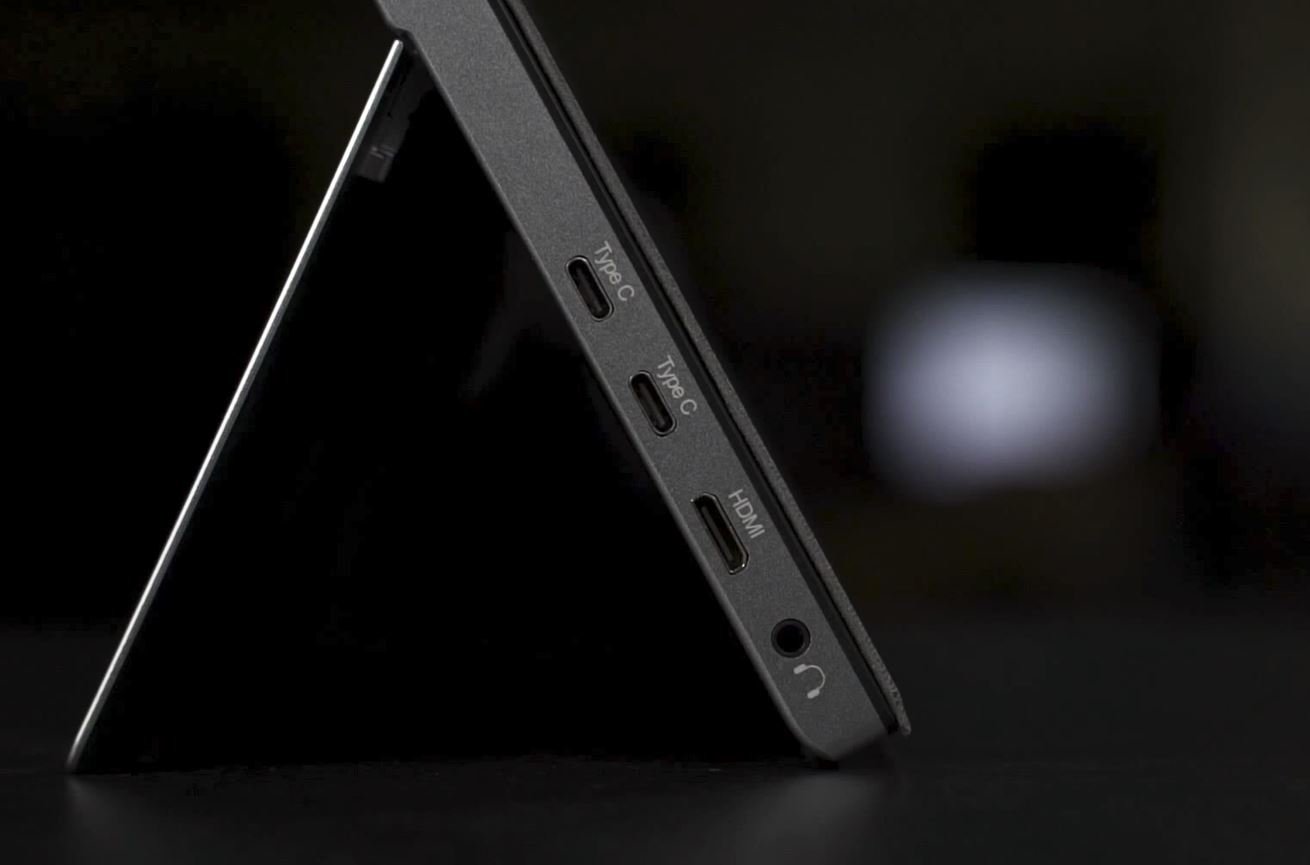 The ViewSonic TD1655 is a robust touchscreen monitor with 16 inches diagonal and full HD resolution. Its well-thought-out design, the low weight, and the possibility of operating it “without electricity” via a power bank make it ideal for on the go. The perfect solution for everyone who calls up their content on their smartphone, tablet or laptop, wants a larger display. Modern connections such as USB-C and a natural color display round off the overall package cleanly. The TD1655 is recommendable for everyone who works on the move at home, when traveling for school, and at work.

LG 34WN780-B vs Acer CB342CKC UltraWide Monitor: Which is Better