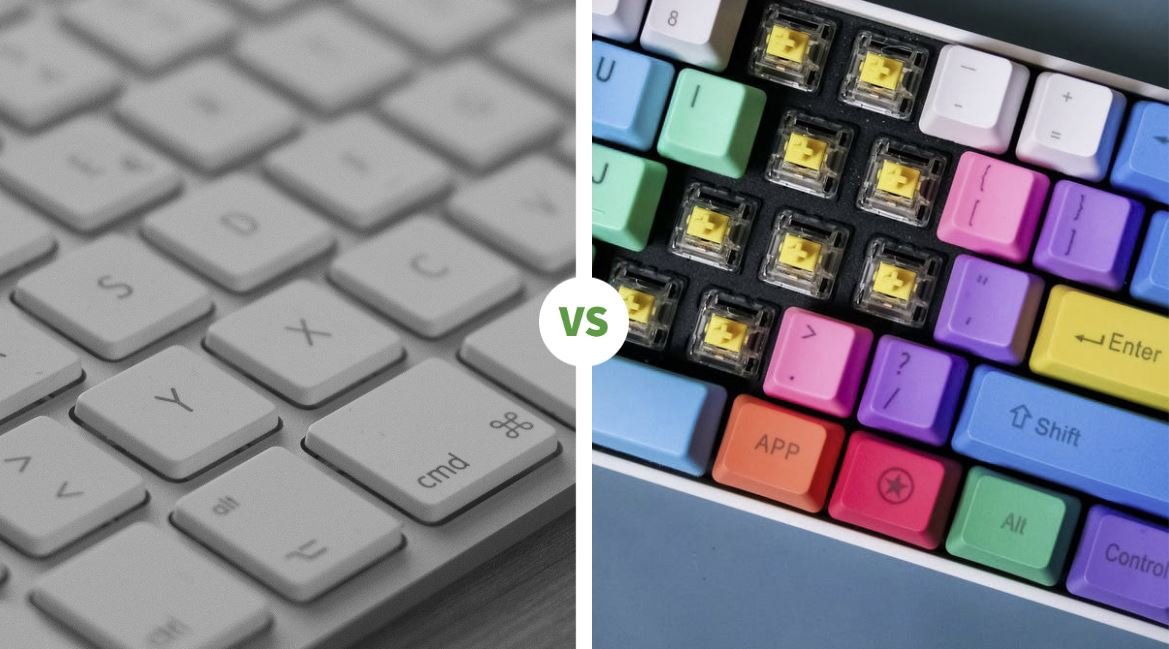 Many readers may not have a deep research on keyboards. When buying keyboards in shopping malls or websites, they often see many different names, such as backlit keyboard, gaming keyboard, multimedia keyboard, wireless keyboard, mechanical keyboard, etc. Be confused. This time, the author will briefly introduce different keyboard trigger types so that everyone can understand these differences.

Functions and classifications are very different

The main function of the keyboard is to input text, so it needs to have a design that can meet the input needs of various countries. The standard keyboard in US is based on the English QWERTY keyboard configuration and adds phonetic symbols and English.

The source of the name of this keyboard is that “QWERTY” is the first 6 letters of the first row in the upper left of the keyboard letter area. This keyboard was designed by Christopher Sholes and will be arranged like this. The main reason is that in the 1870s, when the typewriter was still in use, separating the commonly used letters reduced the squeeze between the linkage rods during typing and avoided malfunctions. Over time, they have become standard English and Latin letters. The standard keyboard configuration.

In terms of size classification, it can be divided into standard size keyboards (also called 100% keyboards) with typing area, editing key area, and numeric keypad, or only A 60% keyboard in the typing area and a 20% keyboard with only numeric keys. Suppose the backlight function classifies it. In that case, it can be divided into a general keyboard without a backlight, or a monochrome backlight with a small light source under the keys, or an adjustable color backlight keyboard with full-color LEDs. According to the connection method, it can be classified into wired and wireless keyboards. Most wired keyboards use a USB interface, while wireless keyboards use Bluetooth or 2.4GHz RF radio wave transmission.

Most of the keyboards mentioned above can be distinguished directly from the appearance, so it is not too difficult to distinguish each other.  These different mechanisms have different triggering principles, so they will also affect the feel when typing. 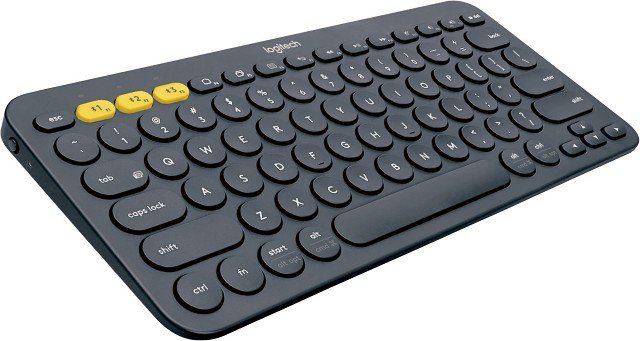 Because this keyboard will emit a colorful backlight, it can be judged to be equipped with a full-color LED backlight function. 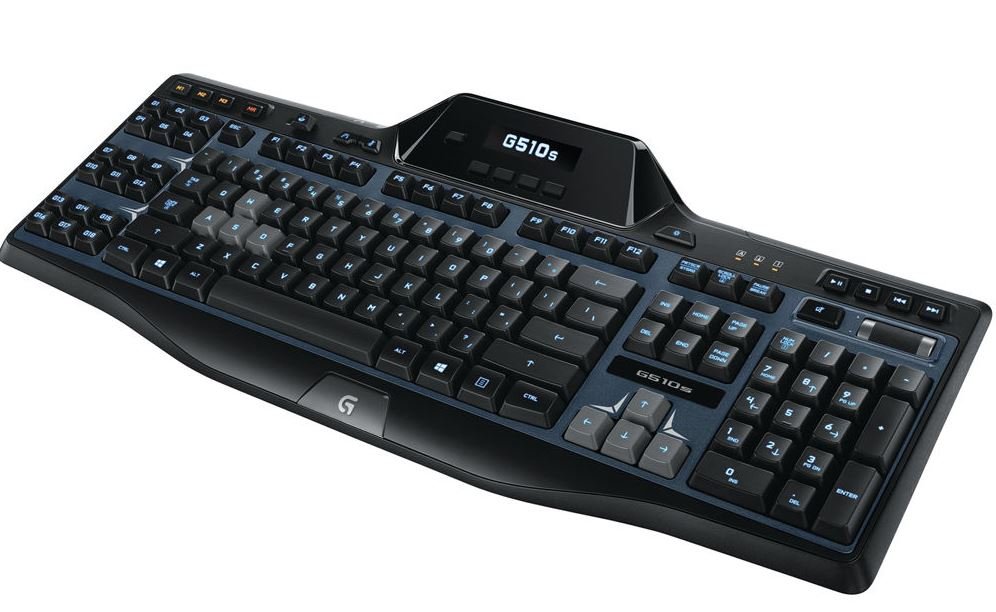 The shape of gaming keyboards is usually cool, and it is not difficult to see the clues from the diverse function keys.

The so-called trigger method refers to how the electronic components inside the keyboard detect the way the user presses the key. The most basic and cheap design is the membrane keyboard, which accounts for a large proportion of all keyboards.

Three layers of films form the main structure of the membrane keyboard. The upper and lower layers will leave round conductive contact points at the corresponding positions of the keys. The middle layer is an insulating layer to avoid direct contact between the upper and lower layers and cause short circuits. When the user presses the keys of the keyboard, the upper conductive film will be squeezed and touch the lower conductive film so that the circuit will be connected and the signal that the key has been pressed can be sent out.

Because the production method of this kind of keyboard is simple and the cost is also very low, whether wired or wireless keyboards, about less than $ 100 products, most of them are membrane keyboards.

However, its biggest problem is that it is easier to cause key conflicts due to hardware design defects. The common situation is that when multiple keys are pressed simultaneously, some of the keys are not signaled or not pressed. The button sends out a signal, which may cause game operation problems. Users with gaming needs can seek products that support N-Key Rollover (NKRO) to avoid key conflicts. 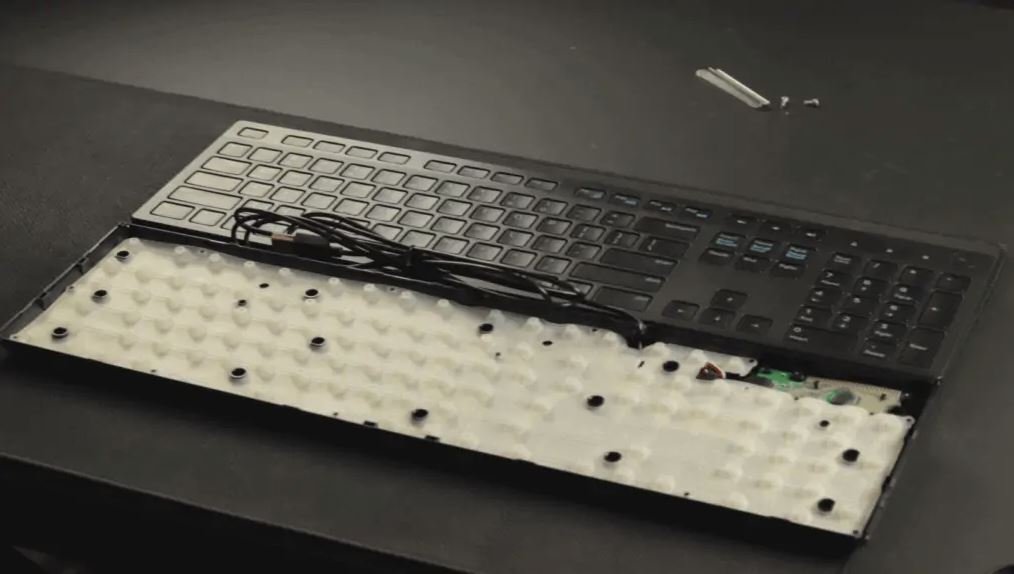 The membrane keyboard adopts a design composed of three layers of membranes and judges whether the upper and lower layers are in contact due to pressing the keys as a trigger.

A rubber cap is laid on the conductive film in general membrane keyboards. When the user presses the button, the rubber cap will bend under force and bounce back when released. The feedback force brought by the process will form the hand feeling when typing. The rubber cap will deteriorate and age over time, making it more and more difficult to press or even fail to spring back, so the durability is relatively poor.

As for the thin keyboards commonly found in notebook computers, rubber caps generally take up too much space; a thinner rubber cap with scissor feet is used instead. The X-shaped scissor mechanism will stabilize the Keycaps and return the keyboard to its original state when rebounding, improving the typing feel.

In addition, some membrane keyboards will add POM guide sleeves between the buttons and the rubber caps so that the feedback force of the membrane mechanism can be more evenly distributed on the keycaps, so when the keycaps are pressed, they will not be like ordinary membrane keyboards. It feels shaking, and the overall stability is high.

The scissor foot structure design commonly used in notebook computers can reduce the thickness of the keyboard while providing a stable feel.

Some membrane keyboards will add POM (Polyoxymethylene) guide sleeves above the rubber caps. If the cross-axis type is adopted, the keycaps for mechanical keyboards can also be replaced.

As for the titles such as “mechanical axis” or “mechanical keyboard” that we often see on the labels of gaming keyboards, the signal is triggered by an independent mechanical switch under each button, and these parts are called a key shaft. 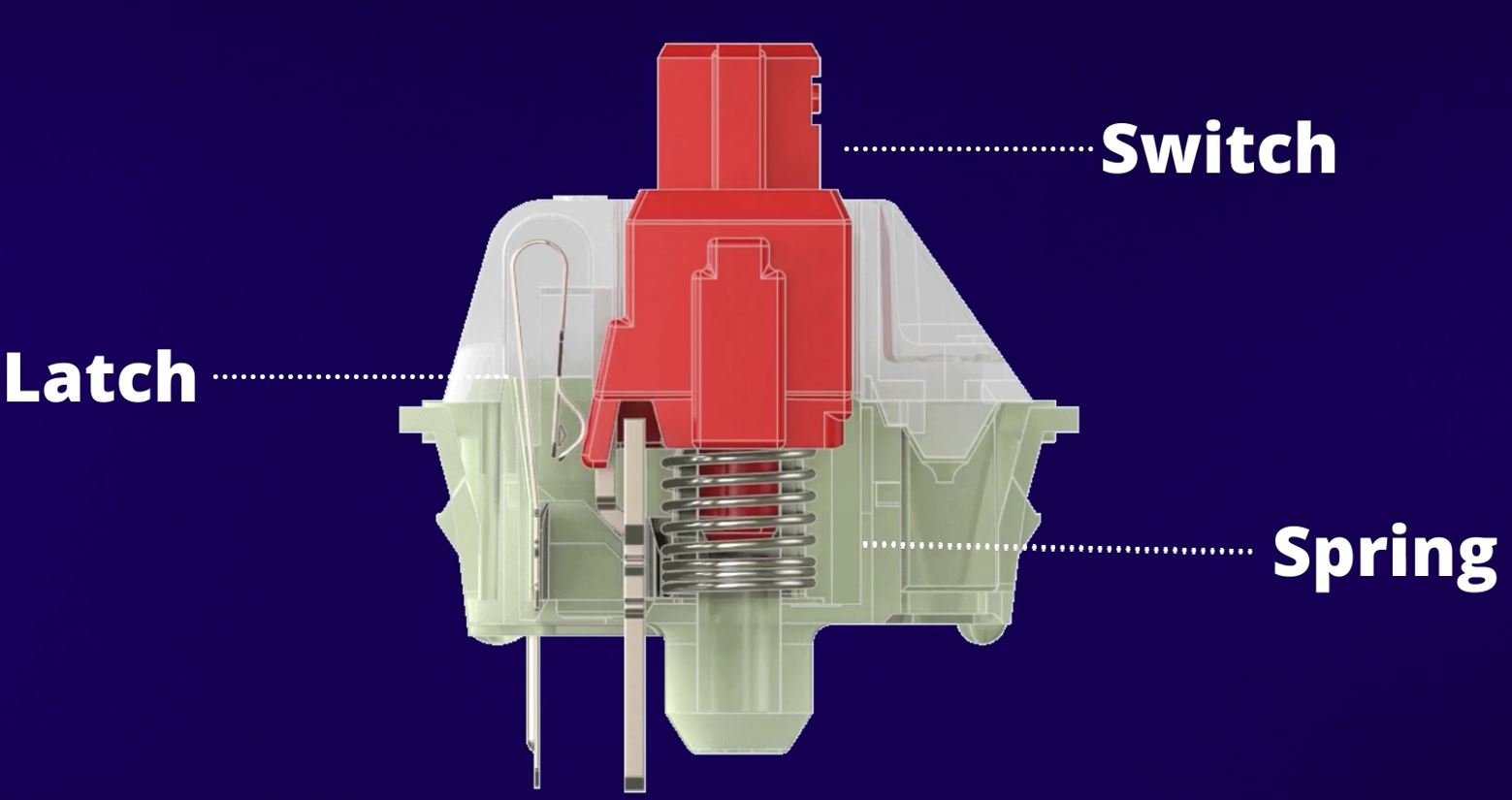 The mechanical shaft can be divided into a plastic shaft, a spring, and a copper sheet for triggering. When the button is pressed, the plastic shaft will squeeze the copper sheet and let the two copper sheets contact together to send out a signal. When the button is pressed, the spring provides the rebound force. The durability of the spring is higher than that of the rubber cap, the overall life of the keyboard will be longer. 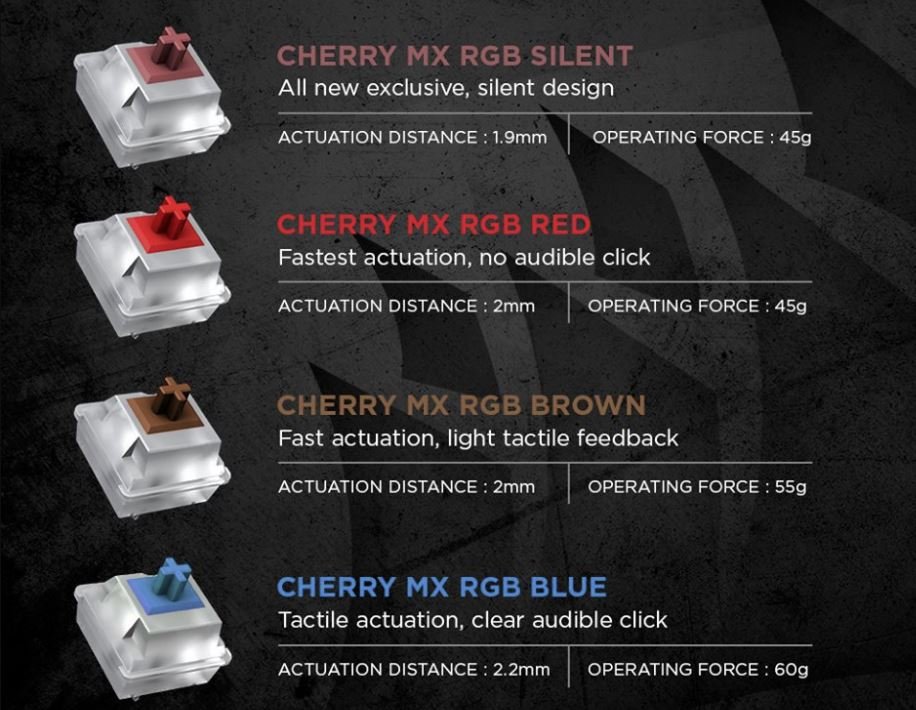 Because gaming players have higher requirements for operating feel, many gaming keyboards will launch a variety of different mechanical axis versions, allowing players to choose the most comfortable version. 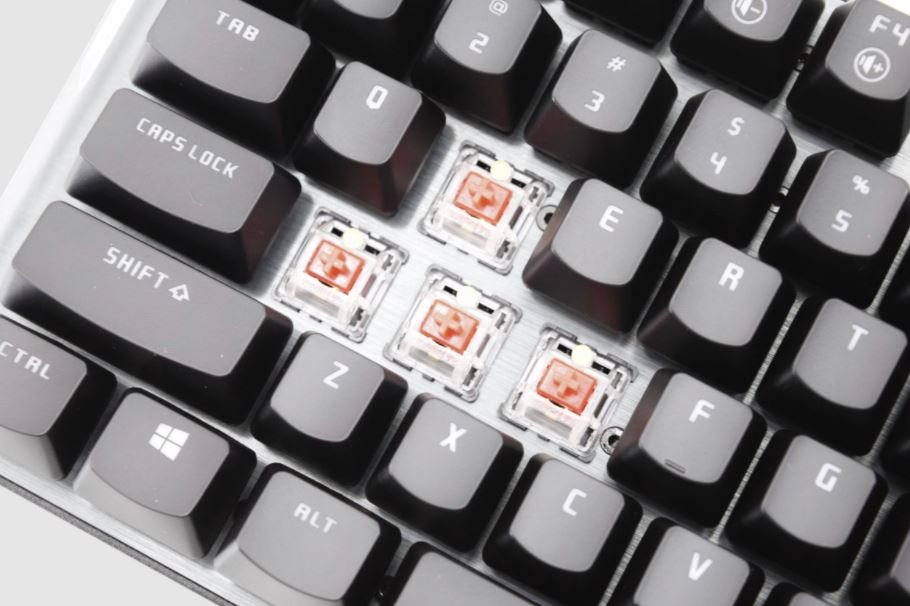 After disassembling the mechanical shaft, you can see the shaft cap, shaft center, spring, base, copper sheet and other parts.

In addition to the membrane and mechanical keyboards, a more common trigger method is a capacitive keyboard that uses a principle similar to a capacitive switch. Its operating principle is that when the key is pressed, the distance between the two variable electrodes is changed; thereby, a change in the capacitance value is generated, which triggers the keyboard signal.

The biggest advantage of the capacitive keyboard is that the change of capacitance triggers the signal. The whole triggering process does not require any component contact. Unlike membrane or mechanical keyboards, the signal is generated by the contact between the conductive film and the mechanical shaft. Therefore, the capacitive keyboard is Also called a contactless keyboard. The advantage of this design is that the mechanical structure has no actual contact, which makes the operation more sensitive, reduces wear and tear, and extends the service life.

As the saying goes, it’s impossible to have a good horse and not eat the grass. The biggest disadvantage of a capacitive keyboard is that the price is not low. Take the capacitive keyboard launched by Japan Topre as an example; the product is $250 to $500. Everywhere, the cheaper capacitive keyboards of other manufacturers are also approaching $200, which may make players want to try it out.

Topre’s capacitive keyboard is an example. Its rebound force is provided by the internal conical spring, providing a stable operating feel. 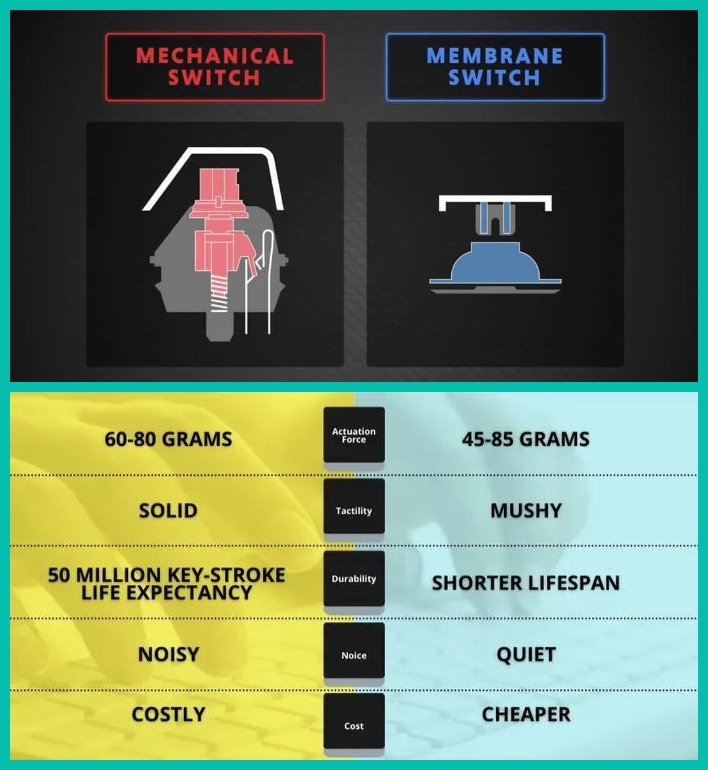 Take the author’s own needs as an example. Although I play many games, I mainly use the handle and joystick to operate the game. I rarely use the keyboard to operate the game. On the contrary, I need to type for a long time because of my work requirements, and I often need input. Numbers, so the preferred size is a 100% keyboard. As for the typing feel, because I have been accustomed to the feel of a certain membrane keyboard since I was a student, and because of the low price, I buy the same keyboard in the office and at home to work in the most familiar situation.

As for the game as the main consideration, a keyboard with anti-ghost keys and NKRO function can be given priority to avoid affecting operation due to key conflicts. As for the shortcut keys and macros, it depends on the game’s needs. If you need to enter many long strings of commands in a game you often play, you can choose a keyboard with a stronger macro function so that you can enter commands in a shorter time. Seize the opportunity.

But the most important thing is that you still need to go to the store to try and compare the different operating feels of the keyboards. After reading the specifications and introductions on the Internet for a long time, it is better to experience the experience in person so that you will not sell it to yourself. Keyboards with too many different feel habits.

How to Create a Strong Password in 10 Easy Steps